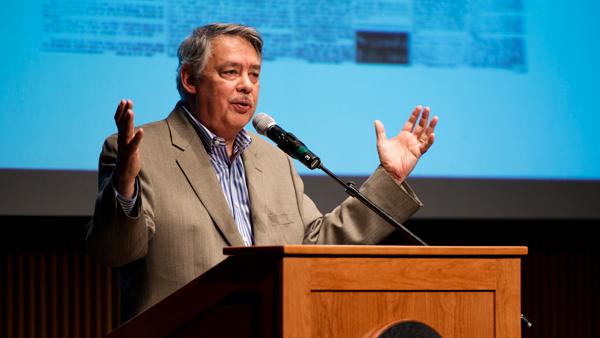 Graham Hebel/The Ithacan
Juan Gonzalez, co-host of Democracy Now! speaks to about 300 people Monday in Emerson Suites about proposed immigration reform and other issues. Gonzalez is the author of "Harvest of Empire: A History of Latinos in America." Ithaca College screened the documentary version Feb. 12.
By Nicole Ogrysko — Senior Writer
Published: February 28, 2013

Recent debate over a comprehensive immigration plan is sparking conversation nationally — and on the Ithaca College campus — as some advocate for a national change to the immigration policy.

Possible reform could grant undocumented immigrants a pathway to legal citizenship in the U.S. Now, lawmakers are debating everything from tightening border patrols and requiring employers to check for legal status to providing a way for undocumented youth to live, work and learn in the U.S.

The college has previously put on events throughout the semester to encourage conversation about the immigration debate.

Now, several sectors of the federal government, from members of the Senate to the White House, are drafting new immigration legislation.

“Just as Congress begins to take on this huge immigration debate, it couldn’t come at a better time to have a more nuanced and public discussion about the causes and the consequences of the modern immigration problem,” Gonzalez said during his presentation, “News for All the People: The Epic Story of Race and U.S. Media.”

Two weeks ago, the New York state Higher Education Committee approved its own Development, Relief, and Education for Alien Minors Act measure that would grant undocumented immigrants in-state tuition rates. It also creates a fund, which would give undocumented students access to private scholarships to help them pay for college. If the Ways and Means Committee approves it, the New York State Assembly will debate the act.

Senator Chuck Schumer of New York is one of eight U.S. senators, known as the “Gang of Eight,” who proposed an immigration reform plan in January.

The bill, called the Bipartisan Framework for Comprehensive Immigration Reform, would allow undocumented immigrants to apply for legal status and receive a green card after every other person who is on the “waiting list” for a green card receives one. For minors who enter the U.S., the bill states children and students would face different legal status requirements because “they did not knowingly choose to violate any immigration laws.”

Of the immigrant population in 2011, 11.1 million are “unauthorized,” a slight drop from the population of 12 million undocumented immigrants living in the U.S. in 2007.

Gonzalez said the problem with the proposed immigration reform lies in the details and the long wait for immigrants to receive legal status.

Since 1965, U.S. policy has said about 20,000 people from each country can immigrate to the U.S., meaning that for immigrants coming from Mexico, India, China and the Philippines, the four largest sources of U.S. immigrants, the wait is long.

Policy makers often use the phrase, “get to the back of the line,” when describing immigrants’ citizenship process, which Gonzalez said should spark a discussion on changing the immigration limits for each country.

Under the bill, the U.S. government would also grant green cards to immigrants who have earned their master’s degree or Ph.D in science, technology, engineering or math from an American college or university. The bill did not specify if undocumented students would receive federal loans or in-state tuition.

Gustavo Licon, professor in the Center for the Study of Race, Culture, and Ethnicity at the college, is the son of undocumented parents. Licon said if he and his brother had been born in Mexico, he may not have gone to an Ivy League university or received access to federal loans.

“I got to do so many things that many of my relatives that were born in Mexico and then immigrated to the U.S. both legally and illegally [didn’t have],” Licon said. “They’ve had to do manual labor. They don’t get the same access to opportunity that I’ve had.”

Gonzalez recalled the story of one his students at Brooklyn College, who came to the U.S. illegally with her parents when she was a child. She graduated from college and was then accepted to Georgetown University Law Center, but she was denied once she couldn’t provide proof of her citizenship.

“Her whole trajectory, her whole career was stopped right there,” Gonzalez said. “It took her a couple of years before she was ever finally able to legalize her status so she could continue her college education, but this is being replicated all across the United States.”

“President Obama’s immigration reform plan is sadly premised on the notion that it is the illegal immigrants who are the victims of our nation’s dysfunctional policies, and our policies must be changed to address their grievances,” Stein said in his statement. “It is the American people who are the true victims of our dysfunctional immigration policies and especially this president’s defiant refusal to enforce laws meant to protect them.”

But Licon said the debate surrounding the DREAM Act is based on fear and does not accurately portray the reasons why people immigrate to the U.S.