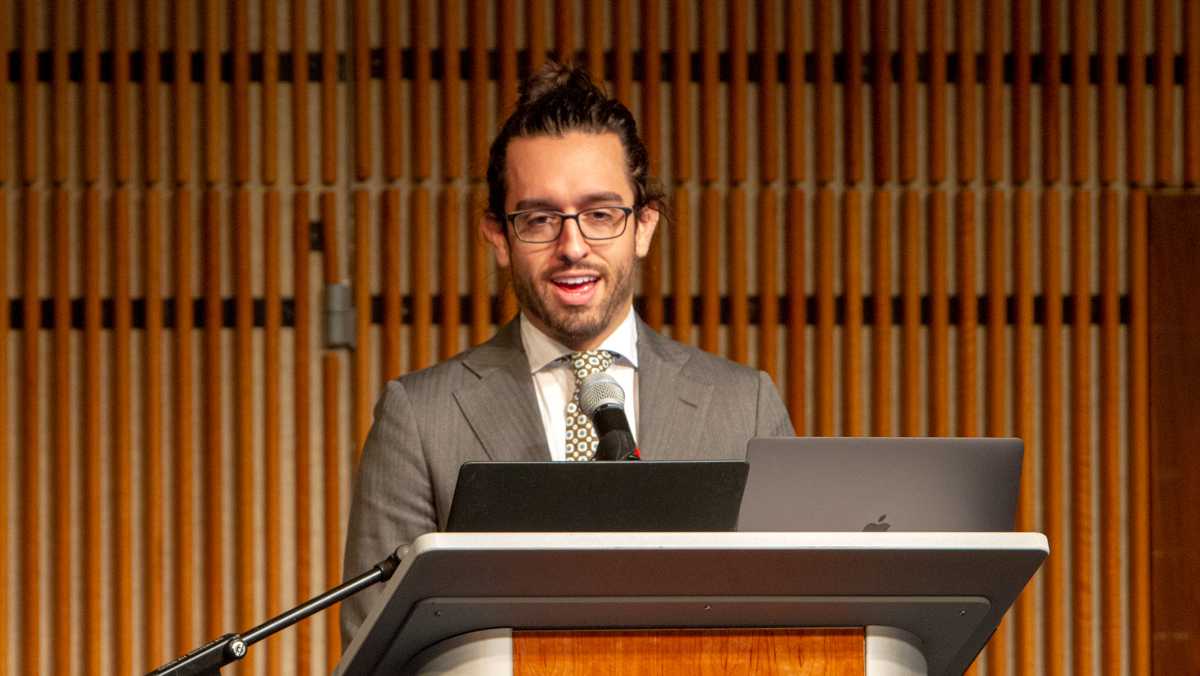 Caroline Brophy/The Ithacan
Smith said he became interested in the McDonald case after Slate Magazine published an article by Jamie Kalven in February 2015. The article stated that the police lied to the public about McDonald’s death. The police report said he was killed by a single shot whereas the autopsy report said he was shot a total of 16 times from different directions.
By Elizabeth Henning — Staff Writer
Published: October 29, 2018

Independent journalist Brandon Smith gave a lecture Oct. 24 at Ithaca College about his work in accountability journalism, specifically surrounding the 2014 shooting of Laquan McDonald in Chicago.

Smith has been published in The Guardian, Al Jazeera, The Daily Beast and other publications and won the Izzy Award with activist Jamie Kalven in 2016 for their work in challenging the original story told by the city about McDonald’s death. Following McDonald’s death, Smith said, he filed a request under the Freedom of Information Act for a video of the shooting that had not been released to the public. On Oct. 24, 2014, McDonald, 17, was seen by police officers walking erratically down a street and holding a knife. Officer Jason Van Dyke left his patrol car and, within seconds, began shooting at McDonald. He shot him a total of 16 times and was convicted earlier this month for second–degree murder. Approximately 70 people attended the event, which was held in the Emerson Suites.

Smith said he became interested in the McDonald case after Slate Magazine published an article by Jamie Kalven in February 2015. The article stated that the police lied to the public about McDonald’s death. The police report said he was killed by a single shot whereas the autopsy report said he was shot a total of 16 times from different directions.

After hearing about the case, Smith said, he heard about a video that allegedly existed and that the police had not released to the public. He first filed an FOIA request, and, after the request was denied, he sued the city and won, resulting in the release of the video.

Before the McDonald case, Smith and his associates pitched story ideas about social justice issues to major news outlets and repeatedly got denied. He said the success of the story about the case – which was done by independent journalists – came  despite the mainstream media’s rejection of other social justice stories.

“It was a big story because we did it, and we were not supported by a big institution,” he said, referring to their court victory.

Smith said he believes the mainstream media missed the lawsuit for the video, police data and witnesses to the crime. He said major media outlets were not aggressive enough in pursuing information related to the case because police shootings in Chicago have become normalized.

“This is still happening,” Smith said. “It’s happening everywhere. Please try to address it if you have some free time in the next 20 to 30 years. I’m leaving it to you. I’m still in business, but I’m counting on you to help me.”

Smith said he advocates for smaller outlets that are less influenced by outside actors.

“I think most of the original findings that make waves and change things in this country are done by smaller outlets, outlets you might call independent,” Smith said.

The most important part of independent media is that it attempts to limit conflicts of interest, he said. He said many major news outlets have deep connections to government and large corporations whose goals can conflict with telling the entire truth.

Freshman Alyshia Korba said Smith’s independent work is what drew her to the lecture.

“I’m a freshman journalism major, and I’m really into investigative journalism,” Korba said. “You also don’t hear too much about independent journalists because they’re not as public, so, as someone who’s trying to figure out what I want to do with journalism, that’s interesting to hear.”

Sophomore Jordan Szymanski, who is from Chicago, said the case was close to home for her.

“I was there when it happened,” she said. “It was such a weird time, and I was working on a school newspaper at the time, so we would always watch what was happening. … I was nervous about home.”

Freshman Mary Raboy said she was curious about what Smith had to say about police violence because she has never experienced anything like it in her hometown.

“Any opportunity I can get to learn more about something, I take it,” Raboy said.