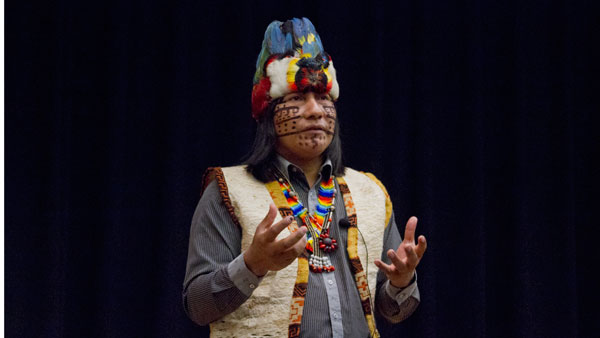 Ithaca College students and faculty had a rare opportunity Dec. 6 to hear from the leader of the Sapara Nation of the Ecuadorian rainforest, a nation currently facing extinction with only 400–1,000 people remaining.

Manari Kaji Ushigua spoke about his dying culture and people in the Park Auditorium to a mixed crowd of students, faculty and Ithaca residents. Pablo Calvi, assistant professor of journalism, translated for Ushigua, who spoke in Spanish. During his presentation, Ushigua revealed the impact of oil drilling and rainforest development on the endangerment of his people.

On Dec. 4, the Ecuadorian government shut down the Fundacion Pachamama, a non-governmental organization that helps Amazonian peoples through political, technical and financial assistance. President Rafael Correa, president of the Republic of Ecuador, cited the foundation’s use of dissent and violence in a protest as a reason for the shut down. Pachamama played an important role in protecting and uniting the native peoples of Ecuador, including the Sapara. The organization insists that the shutdown was done illegally because the foundation’s members did nothing unlawful.

Ushigua said during Correa’s campaign for office, Correa claimed he would protect the various indigenous tribes living within the Ecuadorian jungle, but since then he has broken his promises by expanding oil drilling and rainforest development. Ushigua said the government attempts to convince his people to allow drilling on their land by insisting it will bring them out of poverty, but the Sapara people do not know the concept of poverty.

“When the government argues that when they start drilling for oil they will solve our problem of poverty, we tell them that for us, poverty does not exist, because in order for poverty to exist you have to be in different classes,” Ushigua said through Calvi. “In our culture, that doesn’t exist. There’s no poverty.”

Ushigua discussed how his people live off the land, and they are dependent upon the plants, animals and rainforest to survive. Calvi said the Sapara people are the only nation with a constitution that considers nature as a subject of right.

“Imagine if somebody came here and destroyed all the supermarkets,” Ushigua said through Calvi. “Where would you get your food or your water? Well, for us it’s the same.”

Calvi, who has been doing journalistic work with the native populations in Ecuador for two years, said the plight of Ushigua’s people interests Americans because of their connection to oil and development, and because of growing concerns over the state of the environment. However, he said he believes more people should focus on the implications of potentially losing an entire culture.

“Cultures need to be preserved because they were originated to begin with,” Calvi said. “When you see yourself through the eyes of a different culture, you learn not only about the culture, but also about yourself. You see yourself from an external point of view.”

Calvi said the Sapara Nation can teach industrialized cultures how to have a deeper relationship with nature and with fellow human beings.

“They don’t think of themselves as an entity separate from the jungle, but we think of animals and plants and other people as entities that we quantify,” Calvi said. “We as a people, as mankind, [are] here to understand each other and take care of each other, not to exploit and do whatever you want … and that’s something they can teach us beautifully.”

Senior Blake Wetherbee said he decided to attend the event because he has an interest in indigenous rights in the Americas and in the environment. Wetherbee said he believes the Sapara people can teach the rest of the world how to live sustainably.

“It seems as though we can learn moderation and taking time to … evaluate what the impacts of our decisions are,” Wetherbee said.

Calvi said he encourages students who are interested in learning more about the Sapara people to join the annual trip to the Ecuadorian rainforest with Susan Allen-Gil, professor of environmental studies and science. The trip lasts for a week, during which students can interact with the indigenous peoples and immerse themselves in their cultures. Calvi said taking opportunities like this trip to listen to the story of the Sapara is one of the best ways to help their nation survive.

“We haven’t listened, and we should,” Calvi said. “I think we owe it to them and maybe we would do a favor to ourselves. I would like everybody who wants to do that to pay attention to what’s going on in Ecuador.”