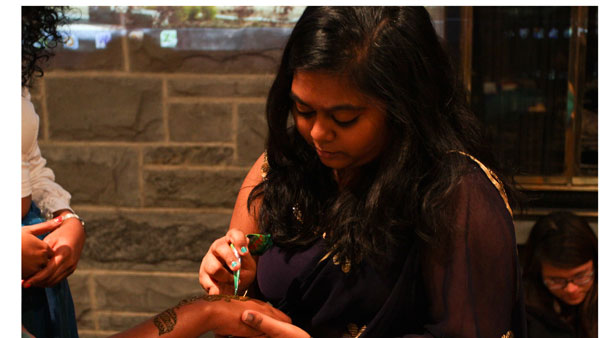 Students from around the world gathered Oct. 28 in Clarke Lounge to share their cultures and kick off the 2013 International Education Week.

Junior Giulia Dwight, president of the International Club, said this is the first year that the club is collaborating with other international organizations, including PODER: Latino Students Association, the Asian-American Alliance and the African Student Association.

“This is the biggest point, because it allows us to see that we’re more involved with the Ithaca community,” Dwight said.

“Around the World in 60 Minutes” was one of the events held this week. It consisted of a series of displays where students from different countries shared information about their cultures and traditions with those who attended. Australia, Sri Lanka, Cambodia, Canada, India, Italy, Mexico and Uganda were a few of the countries represented.

International Education Week is organized by the college’s International Club as a celebration of the diversity throughout the college. This is the 12th year of the events, Dwight said.

The international photo exhibit, which is also a part of the education week celebrations, began Oct. 28 and will run through Nov. 1 in Phillips Hall. The photos are taken by students who studied abroad or international students in their home country or the United States.

Dwight represented Italy at “Around the World in 60 Minutes.” She said she went through her closet to find what reminded her of home when she put her presentation together. Dwight said she wanted her display to give students a better understanding of her country.

“I want people to know not just the stereotypes, but who we actually are,” Dwight said.

Freshman Likhita Ravuri, who represented India at the event, said she wanted to change the impression people have of India and focus on the efforts being done to improve the country.

“There are people working to change the image of India and trying to reduce the poverty and the illiteracy,” Ravuri said.

Freshman Parin Kaba, who represented Uganda at the event, said she wanted people to learn about the many different countries and cultures of Africa.

“[Students] should make an effort to learn more about other countries,” Kaba said. “Many people don’t know that the longest river in the world has its source in Uganda.”

Kaba’s table also hosted Ethiopia and Zimbabwe. The display exhibited photos of Victoria Falls, which borders Zimbabwe and Zambia, as well as handmade slippers from Uganda.

The Australia-Canada table showcased a slide presentation of Australia and moccasins acknowledging the indigenous influences in Canada. The highlight of the Canadian presentation featured the Canadian anthem in French and English.

The International Education activities will be continuing through the rest of the week, with the Dia de Los Hallows event at 6:30 p.m. Oct. 31 in the Clarke Lounge. The evening, sponsored by PODER, will celebrate the South American culture surrounding the Day of the Dead.

The final event of the week will be the One World Concert from 7–9:30 p.m. Nov. 1 in Emerson Suites. The concert will feature an array of international performers.