Investigative journalist digs up the truth 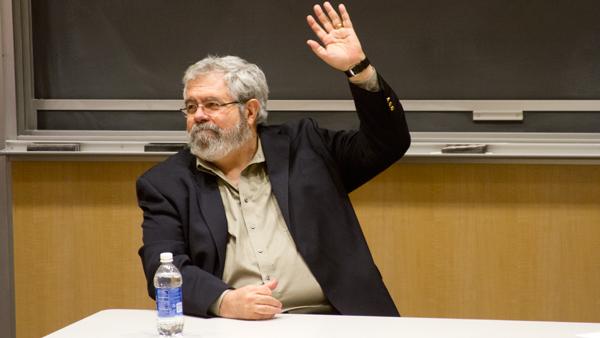 David Cay Johnston, Pulitzer Prize-winning journalist and president of Investigative Reporters and Editors, had a message for student journalists: “Find a way to distinguish yourself.”

Johnston’s message was part of a lecture, titled “Digging Up the Dirt: Investigative Journalism,” co-sponsored by the Ithaca College Chapter of The Society of Professional Journalists, the department of journalism and the Park Center for Independent Media.

In his presentation Tuesday, Johnston discussed investigative journalism, his reporting on taxes and the economy, and questioning the one percent.

Johnston said general tax reporting coverage can be broken down into three categories: what politicians say, money saving tips and action the government has taken — whether it be arrests or bringing a case against someone.

During his career as an investigative reporter, Johnston discovered tactics the wealthy used to find ways to live tax-free.

Following the lecture, SPJ president Meagan McGinnes moderated an informal question-and-answer session. At the end of the session, a larger discussion was opened up to the audience.

When asked about Mitt Romney’s tax returns, Johnston said Romney paid a 15 percent tax rate, because he was the manager of a private equity firm and was paying the legal tax rate.

Johnston closed the lecture by giving advice to any student pursuing a career in the field of journalism.

“Find a way to distinguish yourself,” Johnston said. “It’s still a very competitive business. I got ahead by out-thinking and out-competing the competition. Think about how to stand out.”

Junior Alexandra Leslie, SPJ treasurer, said she is interested in pursuing a career in investigative journalism. She said Johnston’s lecture offered valuable advice on how to thrive in the industry.

“David’s past was very interesting to learn about,” Leslie said. “Specifically his tips right at the end on how to be a good reporter and how to investigate thoroughly were very helpful.”

After hearing Johnston speak in her journalism ethics class, junior Amelia Reynolds said she was intrigued and attended the lecture to learn more about him and investigative reporting.

“I wanted to follow up, because I found him really compelling the first time,” Reynolds said.