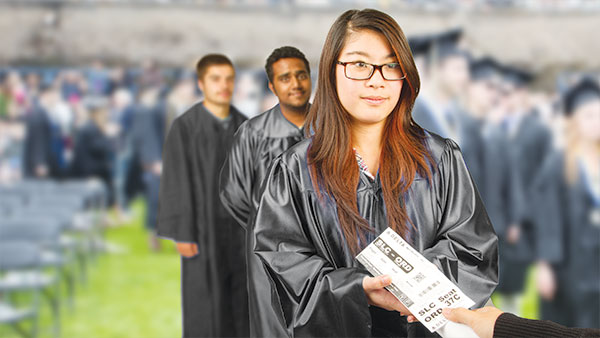 Ithaca, New York, home to three collegiate institutions, attracts the highest concentration of international students in the country, yet the city loses these constituents to bigger cities and a restrictive visa process.

The intensity of foreign students in Ithaca is 71.2 student visas per 1,000 students, which far outpaces the a national average of 22.4 for metropolitan areas, according to data from 2008–12 in a study conducted by Neil G. Ruiz of the Metropolitan Policy Program of the Brookings Institution.

However, only about 14.3 percent of Ithaca’s foreign students stay in the area after graduation to work, compared to a 45 percent national average, according to the study.

Julia Mattick, executive director of the Tompkins County Workforce Investment Board, said the low retention rate post-graduation is partly explained by the perceived lack of depth in Ithaca’s labor market compared to big metropolitan areas like New York City. However, this problem is applicable to young students in general, she said.

“There is a perception that there’s a lack of opportunities in this area for good employment,” she said. “Upstate New York is not considered a place that has a lot of great opportunities.”

Senior Brando Benetton, from Italy, said he does not plan to stay in Ithaca since he doesn’t foresee many opportunities in the film industries here, which is his area of study.

“For me, it would be New York or Los Angeles,” he said.

The path to citizenship for foreign-born students is what creates the extra hindrance preventing them from staying in the area.

In order to obtain a student visa, called an F-1 visa, a student must be accepted by a government-approved school, prove he or she has the money to cover expenses of one year of tuition and display academic preparedness to succeed in the program and school that he or she chooses. Students on F-1 visas are admitted into the country until their degree program is complete.

Following their college graduation, foreign students may choose to enroll in the Optional Practical Training program, through which they are permitted by the United States Citizenship and Immigration Services to work on a student visa and receive practical training in their field. The program allows science, technology, engineering and mathematics students to stay on for 29 months and non-STEM students to stay on for 12 months.

Tanya Saunders, assistant provost of international studies and specialprojects, said this is a common course for students to stay in the country.

“Many of these students do, in fact, transform those Optional Training experiences into employment and a green card down the road,” Saunders said.

Diana Dimitrova, director ofinternational student services, said of the 173 students currently on F-1 visas at the college, 39 are enrolled in the OPT program.

Senior Tariq Widarso, from Indonesia, said he plans to apply for graduate school in 2015, through which he would receive another student visa. He said the job prospects in his field of anthropology are better in this country, but whether he stays in Ithaca is dependent on where he is accepted for graduate school.

“I like Ithaca, and I wouldn’t mind staying here, but it really depends on my higher education after this,” he said.

The extra hurdle specific to international students who are trying to find local employment, Mattick said, is obtaining H-1B status: a visa for which companies petition to hire foreign-born workers after going through the OPT program.

“We regularly hear from companies that it’s difficult to get H-1B visas, which are allowable if they can prove that there is no one in the labor market that has the skills that you need, that they are justified in hiring someone,” she said.

One of the leading law firms in the country that helps individuals and companies with this process, Miller Mayer, LLP, is based in Ithaca, Mattrick said.

Hilary Fraser, a partner with Miller Mayer, said the H-1B quota is restrictive: 78,000 private company H-1B visas are available nationwide each year, and the odds of being granted an H-1B is about one in three for students with bachelor’s degrees. Moreover, these vacancies disappear often within a day of when the time period opens for companies to petition, which is April 1.

“Because there is such a competition to get these H-1Bs that are in short supply, there is a race, which means the visas are all consumed in just a very short period of time,” she said.

Fraser said the most common route to citizenship is by working under the OPT for as long as possible, the H-1B, then the green card.

“If we’re talking about employment-based immigration, there are very few options for foreign students,” she said.

Junior Dhruv Kumar said he plans to go to another country where he has never been, considering the cumbersome visa process in the U.S., but he has not solidified his plans yet.

“It’s more difficult to get a work visa in the U.S., especially because there are a bunch of fees that you have to pay and the company has to be willing to be your sponsor,” he said.

“Because they have to sponsor you, you are not their first choice,” he said. “They could hire a U.S. citizen with the same credentials without having to sponsor. You have to be attractive enough for them to want to go through that process.”

O’Brien said Cornell’s International Students and Scholars Office works closely with its students to be sure that they understand the OPT and H-1B processes.

“The ISSO holds workshops, which provide information about how to gain work authorization in the U.S. after graduation,” O’Brien said.

John Bradac, director of Career Services at Ithaca College, said it is up to individual companies to decide whether or not a student is qualified to participate in OPT.

“We help any student find opportunities that might be right for them,” he said. “Our goal is to create contacts for every student. Do those contacts turn into full-time professional positions? The answer is yes. We have a number of students who reached that opportunity.I’ve seen that locally, regionally and nationally.”

Saunders said the programs such as the college’s New York City Program and the Los Angeles Program, which are open to all students at the college, are opportunities for international students to create networks that can help them to secure employment.

“International students do well in these internships depending on the company placement,” she said. “Because many of them speak more than one language, many of them can bring their own country’s culture, in terms of marketing.”

Benetton, who is currently studying in Los Angeles, said he hopes his internship with AntFarm, a movie trailer company, will lead to a possible job opportunity.

Bradac said international students greatly benefit the workforce in that they develop the experience and expertise necessary for an efficient employee.

“They have all the positives of a good work ethic, commitment and an excellent education,” he said. “I see some advantages to that. It brings diversity and culture to the work force.”

Widarso said though the process for staying in the U.S. is more difficult, he believes it would be worthwhile.

“It would be the best-case scenario,” he said. “To go home is always the last resort just because it will always be an option, while it might be more fruitful to pursue the harder options first.”