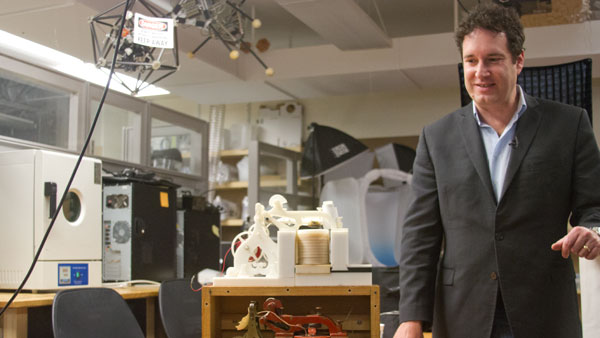 As science advances, the gap between reality and fiction continues to shrink. Though the idea of printing objects like food and toys may seem futuristic, 3-D printing is changing that perception — and it may be coming to Ithaca College as soon as next year.

The college’s natural science departments, including physics, biology, chemistry and environmental sciences and studies, are in the process of submitting a proposal to the School of Humanities and Sciences for purchasing equipment to create a 3-D printing facility.

Luke Keller, associate professor and chair of the physics department, said the departments hope to purchase a 3-D printer for printing models for both faculty and students to use in research.

“We’re going to propose to get a medium quality 3-D printer … and a scanner so we could scan objects and print them,” Keller said. “I can imagine it being used for classes, but also for different research projects with students involved with those.”

3-D printing is a process by which three-dimensional objects of all kinds, such as robots, ears and pastries, are produced based on a computer code. Typical 3-D printers place individual, small, three-dimensional pixels, known as voxels, of a given material on a tray, one at a time, based on the design programmed by the user.

“You’re going to see more and more products use 3-D printing in their development and production,” Lipton said. “Things that will be printed will be directly for people, but it’s going to be in the industrial, commercial setting.”

In a report this August, Goldman Sachs Group, Inc., a global investment banking firm, included 3-D printing in a list of eight markets that will have a major impact on manufacturing. According to the report, 3-D printing can produce complex parts at lower costs and with more customization than the majority of manufacturing machines currently in use. The 3-D printing industry has the potential to quadruple its revenue over the next eight years and reduce the cost of manufactured goods for the general public.

Engineers at the Cornell Creative Machines Laboratory are currently developing a way to speed up the printing process by placing entire layers of voxels, which vary in size, into the design at a time. Apoorva Kiran, a Ph.D. student in the Cornell Creative Machines Lab, said this process will allow 3-D printers to significantly cut down the time it takes to print by adding hundreds of voxels per second to the object.

3-D printing can significantly reduce the number of steps involved in manufacturing. Kiran said machines that normally have long assembly processes can be printed in a matter of minutes.

“If you do 3-D printing, the machine remains the same … [and] you don’t need assembly,” Kiran said. “You can make this thing from scratch on a single platform within 15 minutes, and that’s the power of 3-D printing.”

Depending on the type of printer, 3-D printers can either place individual, small, solid pieces of materials, such as plastic and metal, or drop voxels of liquids and gels, such as plaster and clay, through a syringe.

The variety of materials 3-D printing can use has also allowed engineers to print food. The Barcelona-based company Natural Machines is currently working on the Foodini, a 3-D printer that specializes in printing food products by using materials like chocolate, pasta and cheese.

3-D printing can also be used to enhance the work of researchers outside of engineering. Michael ‘Bodhi’ Rogers, associate professor of physics at the college, has recently purchased a 3-D printer, which he intends to use in his archeological research. Rogers said, by using a 3-D printer, he can improve the way in which he shares his findings with the public.

“I can’t hand somebody a several-hundred-years-old artifact to handle, but I can scan it, print out a copy of it, and then you can touch it and feel it,” Rogers said.

In his research, Rogers also uses a 3-D laser scanner, which uses a laser to create a 360-degree image of a given space. That image is then used to create a three-dimensional model on a computer. Rogers said by combining this technology with a 3-D printer, he could potentially create physical models of this data.

3-D printing has only recently gained attention and is still a developing field. Hod Lipson, director of the Cornell Creative Machines Lab, said the lab is already exploring the future of 3-D printing.

Bioengineers are currently studying the possibilities of creating living tissue with 3-D printers. This type of printing, referred to as bioprinting, could lead to major advances in the medical field, including the ability to produce new organs for people in need of transplants. Lipson said, while 3-D printing has not yet reached the point of being able to print working organs, engineers have made advances in printing living tissue.

“The ultimate goal is to potentially print organs,” Lipson said. “We’ve done some stuff, like printing cartilage, but there’s still quite a ways to go before we can print an entire organ.”

While the prospect of 3-D printing organs would be monumental to the medical field, many people may wonder when they’ll be able to use 3-D printers in their homes as they would use a traditional printer. 3-D printers such as the Makerbot and the Fab@Home can already be purchased for personal use. Though these desktop printers are significantly smaller than commercial printers, they can cost between $2,000 and $5,000, and replacement parts typically cost several hundred dollars each.

Some engineers have made affordability a priority in 3-D printers. Anthony McNicoll, a junior mechanical and aerospace engineering major at Cornell, said he began working in the lab after designing a prototype for a 3-D printer that the average person could purchase.

“When I was in high school, for my senior project I designed an affordable 3-D printer, roughly based on what was out there at the time, which were the Makerbot and the Fab@Home,” McNicoll said.

While some people may want 3-D printers in their homes, Lipton said home printing is no longer the focus of the industry because limited resources and high costs make it impractical.

“[3-D printers] are going to be common, but they’re not going to be in everyone’s home for making cellphones and toys and everything,” Lipton said. “The original idea was that they could do that, but as we work on it, we’ve realized that’s not how it’s going to work out.”