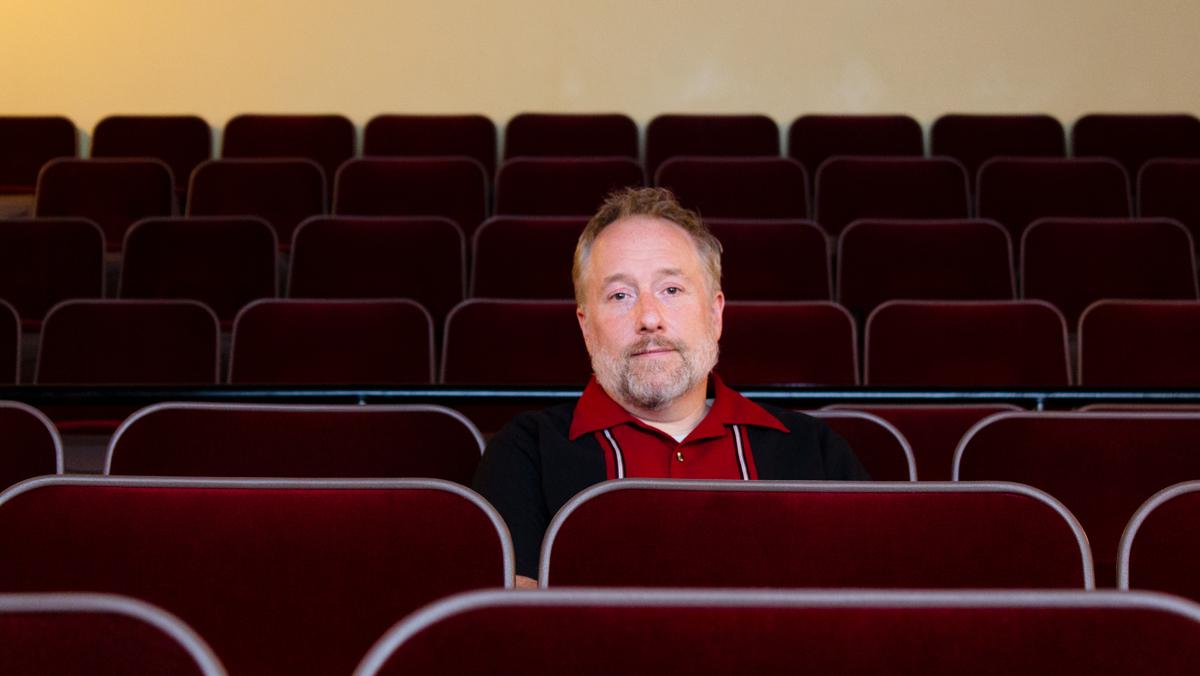 Courtesy of Caroline Bissialon
Brett Bossard, executive director of Cinemapolis, said that due to the business’s nonprofit status and dedication to being a living wage employer, he could keep all 12 employees on the payroll while Cinemapolis remained closed.
By Ashley Stalnecker — Senior Writer
Published: February 18, 2021

In February 2020, The Commons was a hub for the Ithaca community, where students from Ithaca College and local residents crossed paths. Downtown was bustling with students and Ithaca residents dining at restaurants, going to bars and browsing through the local shops. Over the course of the year, the COVID-19 pandemic left the future of many businesses uncertain.

However, now that students are returning back to Ithaca, businesses are adjusting and hoping to bounce back after a difficult year.

When college students do not return, a college town’s economy suffers. In Ithaca, a city that houses Ithaca College, Cornell University and neighbors Tompkins Cortland Community College (TC3), businesses are struggling through a recession. Elia Kacapyr, professor in the Department of Economics at Ithaca College, reported on COVID-19’s impact on Ithaca’s economy in the Ithaca Business Index. In Spring 2020, Cornell University, TC3 and Ithaca College all went remote to limit the spread of COVID-19. All three colleges planned to return in the fall, but Ithaca College reversed its plan in favor of a fully remote fall semester just weeks before the semester was scheduled to begin.

Kacapyr found that job loss in Ithaca has been proportional to the national job loss, with 9,500 jobs in Ithaca lost, compared to 20.5 million jobs lost nationally in April 2020 alone.

“That was really scary,” Kacapyr said. “When that happened, it’s just like so earth shattering and of course, the economy immediately went into full lockdown.”

City of Ithaca Mayor Svante Myrick was sourced by CNBC saying that the closure of Ithaca College or Cornell in the fall could be a devastating blow to Ithaca’s economy. Since the article was published, Ithaca College did announce a fully remote semester.

The financial strain of a pandemic threatens already vulnerable colleges and their respective college towns. According to a study on college towns and COVID-19, the outlook for higher education is changing from stable to negative.

The Ithaca Business Index includes jobs figures, labor force data, retail sales, hours worked per week, home sales and help wanted advertising. The labor force is made up of anyone residing in Ithaca who is employed, or anyone who is seeking employment. The labor force has decreased as a result of the pandemic. However, in December 2020, the labor force increased by 100 people, for a total of 48,600.

Retail sales decreased by 1.8%, and the volume was down 11.2% from a year ago. Employment in the retail sector was down by 800 jobs.

According to Kacapyr’s report, Ithaca’s primary job provider, education and health services, is down 500 positions out of more than 32,000. Due to the pandemic’s effects on the college’s finances, Ithaca College is planning to eliminate 116 full-time equivalent faculty positions. Since March 2020, the college has laid off or furloughed at least 264 staff members.

According to Kacapyr’s report, the economy had risen to just under half of pre-COVID levels by the end of 2020. Kacapyr said that colleges’ abilities to remain open now that students have returned would impact the economy’s ability to continue rising.

From April to December 2020, economic activity increased in seven out of the eight months. In December, the economy ran at 95% of 2019’s level.

Jennifer Tavares, president and CEO of the Tompkins County Chamber of Commerce, said that the economic impacts of COVID-19 will affect Tompkins County into 2021 but that the county will see benefits from community initiatives as the economy recovers.

“The economic impacts are devastating, and they’re widespread, and there’s a lot of industry sectors being impacted, for sure,” Tavares said. “But I think if everyone wasn’t so creative and collaborative and willing to work together to address it, it could be a lot worse.”

Despite loss of revenue, Cinemapolis is one business that has been able to retain its staff. Cinemapolis is a theater in Ithaca that primarily shows independent films. Brett Bossard, executive director of Cinemapolis, said that due to the business’s nonprofit status and dedication to being a living wage employer, he could keep all 12 employees on the payroll while Cinemapolis remained closed. Bossard said Cinemapolis has used funding from the Federal Paycheck Protection Program and dipped into the business’ reserve funds to continue paying employees.

The theater has been closed since mid-March, when the pandemic first shuttered businesses across the nation. Bossard said Cinemapolis’ revenue is less than half of what it normally would be. Normally the theater brings in approximately $1 million a year, but Bossard said he would consider it lucky if the theater earned $500,000 in 2020.

“It’s definitely going to be a challenge,” he said. “We’re very fortunate that we have a generous landlord, an understanding community and a very supportive community financially that we’re able to survive. I think there’s going to be certainly many other small businesses and small movie theaters, particularly, that might not survive this.”

Bossard said Cinemapolis plans to open at the end of February with private showings for groups of 10 to 15 people. Rates and more information will be available to the public later in the month.

Due to limited seating restrictions and a lack of independent film releases, Bossard said Cinemapolis will not have public viewings until further notice. However, Cinemapolis will work with Ithaca College for its annual Finger Lakes Environmental Film Festival, which will be held virtually this year.

In a normal year, Bossard said a quarter of Cinemapolis’ 75,000 guests are college students. This includes students from all colleges in the Ithaca area but particularly Ithaca College given the theater’s strong connection to the Park School of Communications and FLEFF.

“I’m hopeful that we can make some efforts to make sure that folks that are returning to campus are aware of the virtual offerings and these private rentals as soon as we’re live,” Bossard said.  “I do think we’ll see a fair amount of early adoption from students because it’s, like I said, if you split it amongst a group, it’s a cost effective way of getting back into the movies and watching movies the way they’re meant to be seen — with friends on a big screen.”

When many businesses in the entertainment and leisure sectors of the economy had to remain shut down for much of the year, businesses selling alternate forms of entertainment saw a small boost that evened out profits for the year. Joseph Wetmore, owner of Autumn Leaves Used Books, said he has seen a rise in tourists coming to Ithaca to buy books.

“People couldn’t go to concerts, people couldn’t go out and do the normal things they did, so they found entertainment they could do, which included buying books and games and movies and stuff,” Wetmore said.

Wetmore said the bookstore normally has four employees other than himself. When the store closed in March, he had to lay them off. After the store reopened in July, he only rehired one of those employees to cut down on costs.

He said the bookstore was often a place where visitors could sit down and hang out for a couple of hours. Now, he has had to limit seating, and the cafe, Ten Forward, that was on the upper floor has closed. It will not be reopening, he said.

Even though Ithaca College turned to remote instruction for the fall semester, some students lived in off-campus housing to stay in the Ithaca community, which helped support local businesses.

Senior Kasey Charron said she would normally spend every weekend visiting local shops and restaurants in Ithaca, but this semester has made it harder to keep up with that routine.

“I think that it’s something that’s really easy to forget about during these times but it is something that we should think about supporting because that was such a big part of culture in college,” Charron said. “Ithaca just has so much culture and, like, a lot of that culture is fed by the small businesses in the area.”

Charron said she is also disappointed to see that some businesses have permanently closed.

“I’ve heard so many great things about Silky Jones, and I was so excited to go there as a new 21-year-old and experience the bar culture,” she said.

Cafe Pacific owner Fumie Oda said her landlord ended her lease, forcing her to close her business Jan. 31 after struggling to meet rent payments of as much as $1,000 for several months. Currently, she said she is looking for a new location, but most locations are too expensive, too small or simply not renting during the pandemic.

“I did not expect the community to come together like this,” Wu said. “It’s surreal how the — not just alumni from I think Cornell but just in general, people who lived in Ithaca — they feel that attachment to the city and to the small town and how they want to help and keep these businesses up.”

Senior Lizzie Carroll said closures in Ithaca and throughout the country are upsetting. Carroll has been on The Commons but said the experience is different this year than in the past.

“Obviously it’s upsetting that we don’t get to have our normal Ithaca Commons experience, but I think it’s important that everyone is operating at their comfort level while also maintaining COVID protocol,” Carroll said. “We have to take care of each other while also doing what we love.”