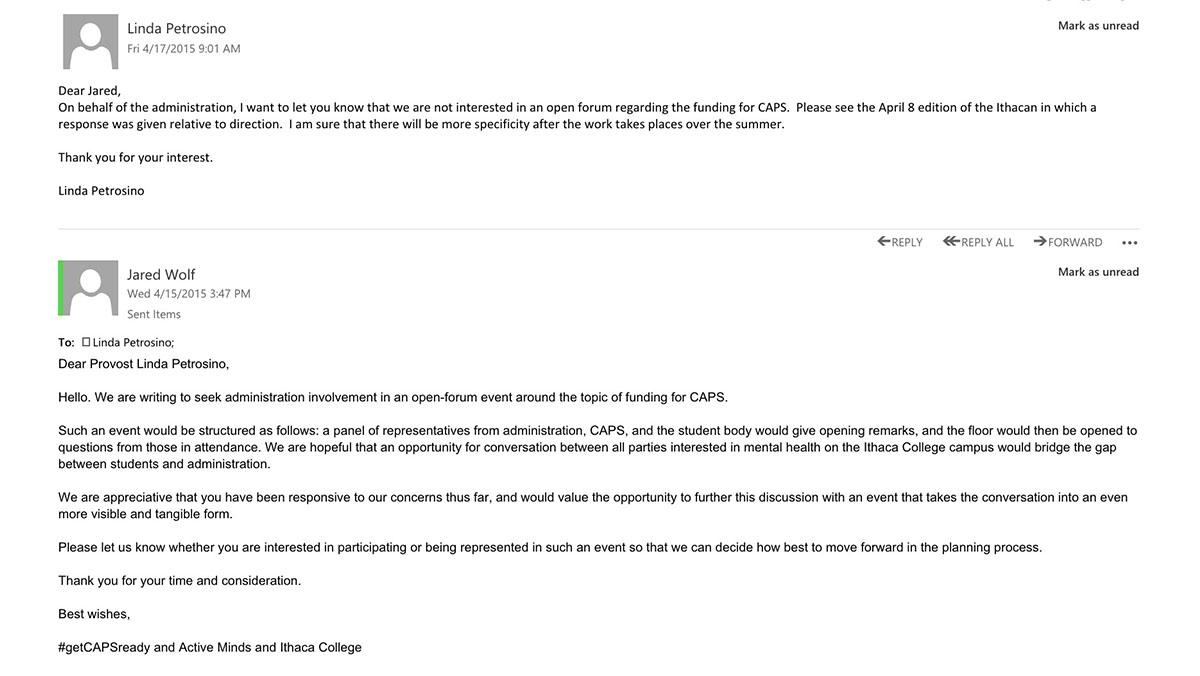 A screenshot of the email Linda Petrosino, interim provost and vice president for educational affairs, sent to Jared Wolf on April 17, regarding administration particaption in an open-forum discussion.
By Max Denning — Online News Editor
Published: April 17, 2015

The Ithaca College administration has rejected the #getCAPSready campaign’s invite to have an open-forum event, which would have included representatives from the Center for Counseling and Psychological Services and the administration on a panel speaking to students.

Senior Jared Wolf sent an email April 15 to President Tom Rochon; Linda Petrosino, interim provost and vice president for educational affairs; and Thomas Grape ’80, chair of the Ithaca College Board of Trustees, seeking administration involvement in a panel on behalf of  #getCAPSready and Active Minds.

Wolf said the event was designed to give students a forum to “get on the same page” with administrators and CAPS staff.

“What #getCAPSready is trying to be in this next stage is a liaison between students and administration,” Wolf said. “That’s what this event was intending to do: bridge that gap.”

Wolf said Petrosino’s response shows the administration’s lack of understanding of the degree to which the student body wants action.

Sophomore Kevin Doubleday,  a member of the #getCAPSready campaign, said it’s nice the faculty wrote a commentary, but would like to see more.

“It’s nice to be acknowledged, but it would be nicer for change to happen,” he said.

Wolf said he is frustrated by the administration’s decision.

“From day one, it’s been what can we do for CAPS and with administration for CAPS. This was an opportunity, and if nothing changes, it’s lost, and that’s on their end,” Wolf said.