Ithaca College has appointed Linda Petrosino ’78 the next dean of the School of Health Sciences and Human Performance. 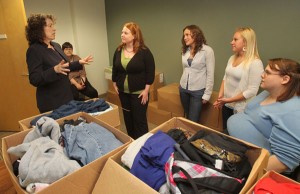 The search process for the new dean included candidates from across the country. The applicants were narrowed down to a group of semifinalists who had neutral site interviews in January. Four of those were then chosen and brought to campus, Marisa Kelly, provost and vice president of academic affairs, said.

“They were all excellent candidates, but Linda really stood out as having the right combination of both experience and enthusiasm,” she said. “That combination in addition to all of the practical abilities that she clearly had really helped us make the decision.”

Petrosino also engaged well with faculty, administrators and students throughout the search process, which is critical for a dean, Kelly said.

“It was easy to see during her time here on campus that she would be able to engage with all members of the campus community in a
positive way,” she said.

Petrosino received a bachelor’s and master’s degree in speech pathology and audiology from the college, but Kelly said this did not have a major influence on her hiring.

“It is a very nice side benefit to be able to welcome her back to her alma mater,” she said.

Petrosino began as an entry level assistant professor in Communication Sciences and
Disorders at Bowling Green State University 26 years ago. She then served as associate dean at the College of Health and Human Services at BGSU before gaining the full position, which she has been in for the last 10 years.

Petrosino said she was attracted to the college because of the presidential and new provost leadership and the commitment of the faculty, as well as the strength of the programs, many of them being nationally ranked. These programs include physical therapy, occupational therapy, and speech-language pathology.

“I certainly have a love of Ithaca College, having been an alum of the late 1970s and having some other family lineage there,” she said.

The IC 20/20 plan was also instrumental in Petrosino’s decision to apply for the position of dean at the college.

“It is a very exciting, aggressive plan that I think is the right direction for an institution of higher education, and I was excited to see the college
really being on the forefront of where higher education needs to go in terms of a real student-centered plan,” she said.

Diane Gayeski, dean of the Roy H. Park School of Communications and chair of the search committee for the new dean, said the committee selected a list of candidates that were most qualified for the position.

From that list, the provost ultimately chose Petrosino. This decision was made by measuring Petrosino’s background up to the needs of the school and responsibilities of the dean position.

Besides her practical experience as a dean and her genuine interest in IC 20/20, Petrosino will bring her track record of fundraising experience and success to the college, Kelly said. Once Petrosino takes office, one of the main projects she will tackle will be assisting with the fundraising for IC 20/20.

“There are many elements of IC 20/20 that we intend to be funded by way of the institution’s next capital campaign, and we will want all of the deans involved in that effort,” Kelly said.

She said Petrosino has collaborated with people across programs, schools and divides at BGSU, helping people resolve their differences and come to agreements.

“She has a lot of experience in bringing people together, getting them to sit down at the table when they have a disagreement and being able to
ultimately develop a common direction that everyone can agree to,” Kelly said.

Petrosino is also confident that she will be a good addition to the college administration.

“Hopefully I can bring my many years of administrative experience coupled with my years as a scientist researcher,” she said. “I also understand what is necessary to educate the next generation of health sciences and human performance professionals.”