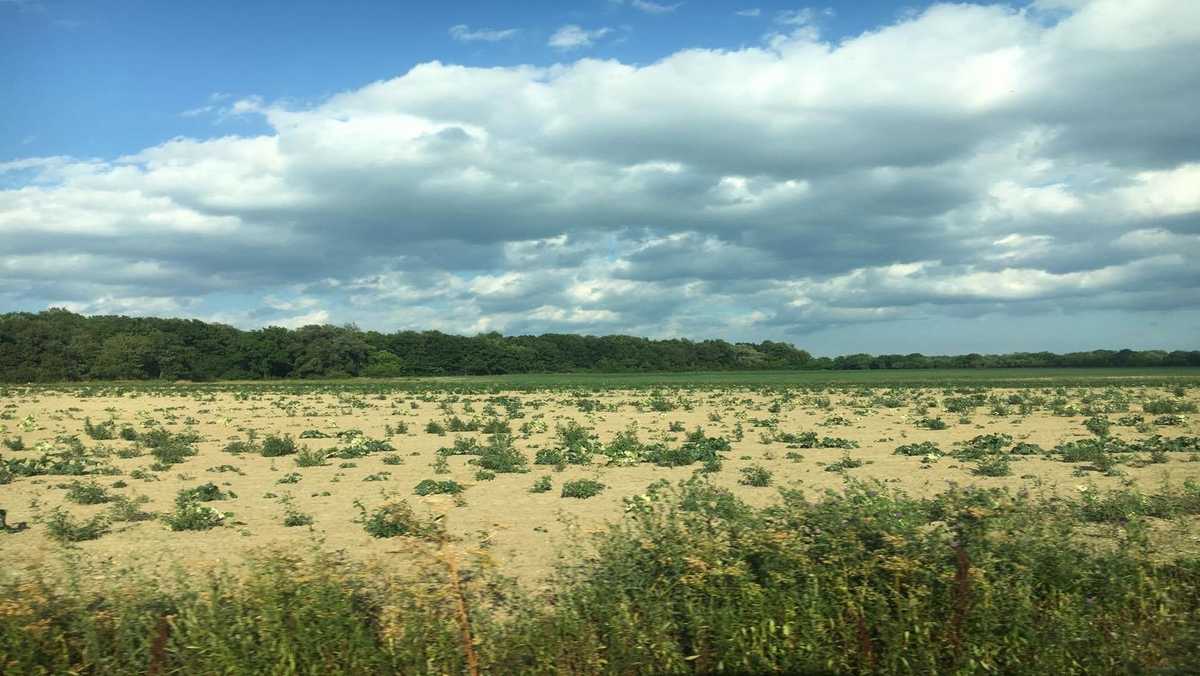 Courtesy of Sophia Pitti
Cornfields near Ithaca College sophomore Sophia Pitti's house in Lansing, New York are not at their normal heights this summer. Following a severe drought, and some of the lowest rainfall on record in the Ithaca area, the community and campus are initiating conservation efforts.
By Sophia Tulp — News Editor
Published: August 9, 2016

In the midst of unrelenting heat and minimal rainfall, Ithaca College sophomore Sophia Pitti has watched the grass turn browner daily and her neighbor’s cornfield in Lansing fall behind schedule.

“The grass is dying, and the vegetation is suffering,” she said. “The corn is so low. It’s supposed to be knee-high by the Fourth of July, and it’s struggling to get there.”

With total rainfall in the Ithaca area from March through June at its lowest on record — 6.94 inches, which is 53 percent of the normal level — Ithaca College is taking measures to conserve water as the surrounding area experiences its most severe drought in years.

On July 23, the City of Ithaca announced that the city’s water supply was “critically low” and the city’s reservoir could be drained within the next month if there was no significant rainfall. A drought watch for New York state was issued by the New York State Department of Environmental Conservation July 21 as a result of a prolonged period of low rainfall.

And according to the U.S. Drought Monitor, Tompkins County is experiencing “severe drought” conditions. While the college is not affected as heavily by the drought as many other places in the community — the Bolton Point Water System that the college uses is not currently facing low supply levels — it released an announcement addressing how the campus community is practicing conservation efforts during this time.

Among the listed efforts are: temporarily halting the washing of college vehicles and outdoor surfaces with water, lowering the height of the Dillingham Fountain by half and reducing hours by turning it off from 9 p.m. to 8 a.m., adjusting air conditioning systems to reduce water being used, reusing stormwater for watering plants and looking for leaks or other issues that could leading to unnecessary water use.

“Ithaca [College] wanted to be a good steward of the community and be a good example of the conservation efforts,” Kruppa said in a recent interview. “We appreciate the support of Ithaca College as a community partner to conserve water.”

Coupled with the effects of the drought have been reports by local residents of discolored water, appearing to be various shades of yellow and brown. The discoloration is caused by manganese in the water from Six Mile Creek, which is present in higher concentrations due to the drought, according to an Aug. 4 release from the city.

The release stated the city has been treating the water with sodium permanganate to remove iron and manganese., It stressed that the city’s water is safe to drink, however the levels of manganese “may affect the taste and odor of the water,” and cause staining during laundry cycles.

Cornell University, which uses different water source than the City of Ithaca and the college, also announced July 28 it would be taking water conservation measures.

Kruppa said Bolton Point reported a decrease in demand in the last week as a result of the college’s efforts.

However, he cautioned that the drought could continue to be an issue in the coming weeks as over 25,000 students arrive back on campus. He noted that extra measures like shorter showers, turning off water when brushing teeth or shaving, and any other means of water conservation possible need to take place once the student population returns.

Kruppa said Tompkins County needs 6–9 extra inches of rainfall to alleviate much of the drought impact, making it likely the drought could last weeks longer.

“It is a serious issue; we need three-quarters of an inch of rain a week to keep us stabilized to where we would be comfortable having enough source water,” Kruppa said. “We are not certain that this is necessarily going to happen in the next few weeks based on the weather.”

Despite rainfall last week, Kruppa continued to urge citizens in a press release issued by the health department Aug. 3 that this rain will only provide short term relief, and the drought is still in effect.

Pitti said the entire community is rallying around the conservation efforts and that talk of the drought is almost inescapable.

“It’s the biggest news of the summer for sure,” Pitti said. “Everybody is talking about the drought, Facebook is abuzz with everything that has to do with the drought.”