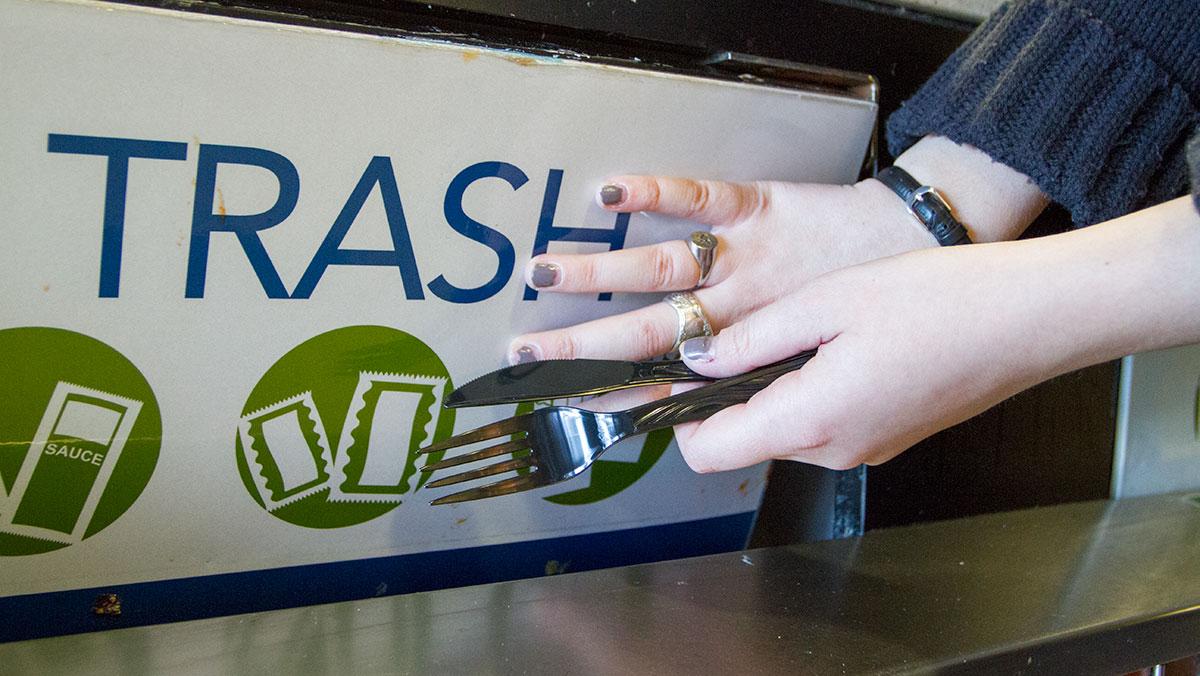 Ithaca College can no longer accept disposable forks, spoons and knives that are labeled as “compostable” into the compost collection bins, and all utensils must now be thrown into the trash.

Mark Darling, sustainability programs coordinator, said Cayuga Compost, the company that accepts and processes the college’s compostable waste, notified the college of the new ban and set a compliance date of Jan. 1.

Bobby Seymour, compost operations and marketing manager at Cayuga Compost, said the ban at the operation currently encompasses all disposable plastics advertised to be compostable.

To address the problem, Cayuga Compost first confirmed that compost was being processed correctly at the facility, Seymour said, and then moved forward with obtaining samples from manufacturers and testing the cutlery.

“We’re putting them into our compost windows at different places, bringing them out at different dates and times, recording what the amount of degradation is, if any, and then putting them back in for well over the standard period,” he said.

The standard period Seymour refers to is 30–45 days, which he said is based on U.S. Composting Council definitions.

Seymour said the estimated cost of manually removing the cutlery contamination from Cayuga Compost’s windows was $21,000 for the year 2014.

“We came to the conclusion that unless and until manufacturers change or we can find truly compostable products that we had to make the decision to stop taking them,” Seymour said.

Both Darling and Seymour said this is an issue happening across the country, and Darling said he believes it is rooted in the lack of state legislation making a clear definition of “compostable.” Green Wave International Inc. manufactures the utensils used at retail locations on campus, like IC Square.

“They’re calling their product compostable because there isn’t a state law that says you can’t use the word compostable,” Darling said. “[Green Wave] misrepresented their product. A portion of their reason is it is compostable … and they’re saying that the whole product is therefore compostable, when in fact, it is not.”

John Calarese, executive director at Green Wave, said the product should break down in approximately 90 days. Green Wave’s website indicates that products will break down into finished compost in 120 days.

“Our product is probably the heaviest product out in the marketplace from all competitors involved,” Calarese said. “Our heavy, full-sized piece of cutlery will take more time to decompose because of the weight of the product, not the composition of the product.”

In response to Darling, Calarese said the product contains no plastic and is wholly compostable.

A study conducted in 2009 in Vermont by Green Mountain Compost tested nine brands of cutlery, eight of which were certified by the Biodegradable Products Institute. The noncertified product was from Green Wave, and it was the only product in the study that remained whole at the end of the testing.

Calarese said this test was old, and Green Wave has since earned BPI certification, which can be seen on the company’s website.

While Green Wave does have the BPI seal on its website, at the bottom of the product page in small print there is a specification that only their bagasse products, made from bamboo and sugar cane, are BPI certified. This does not include the cutlery.

Currently there are printed signs hung over waste receptacles reminding students and faculty to place the cutlery into the trash. Darling said his goal is to find a more permanent solution for the college by April 1, when event season on campus begins in full.

The ideal solution, he said, would be to offer reusable options to students.

“Whether it goes to the compost or to trash, you’re still throwing it away — that one piece that all that effort went through so you can use it once and throw it out,” Darling said.

For students who are motivated to find sustainable options, Darling suggested finding a personal reusable cutlery set to carry along. Such sets can be wooden, bamboo or metal. Offering personal cutlery sets for sale at the Bookstore, installing washing stations at places like IC Square for personal utensils and incentivizing students — similar to the discount received for using a mug instead of a paper cup for coffee — are all ideas Darling said he is considering with the help of students in the Resource and Environmental Management Program.

Junior Rebecca Newman, an Eco-Leader in REMP, said she thinks installing reusable utensils in retail locations will be cheaper for the college over time. She said properly marketing personal cutlery sets to students will be important.

“I think people need to think it’s cool to have this,” Newman said. “With the compostables, people feel slightly better when they use them … compost is great, but the even better alternative is to have reusables.”

Newman said educating students on the disposable cutlery ban and marketing reusable cutlery sets to students will be on REMP’s to-do list this semester.