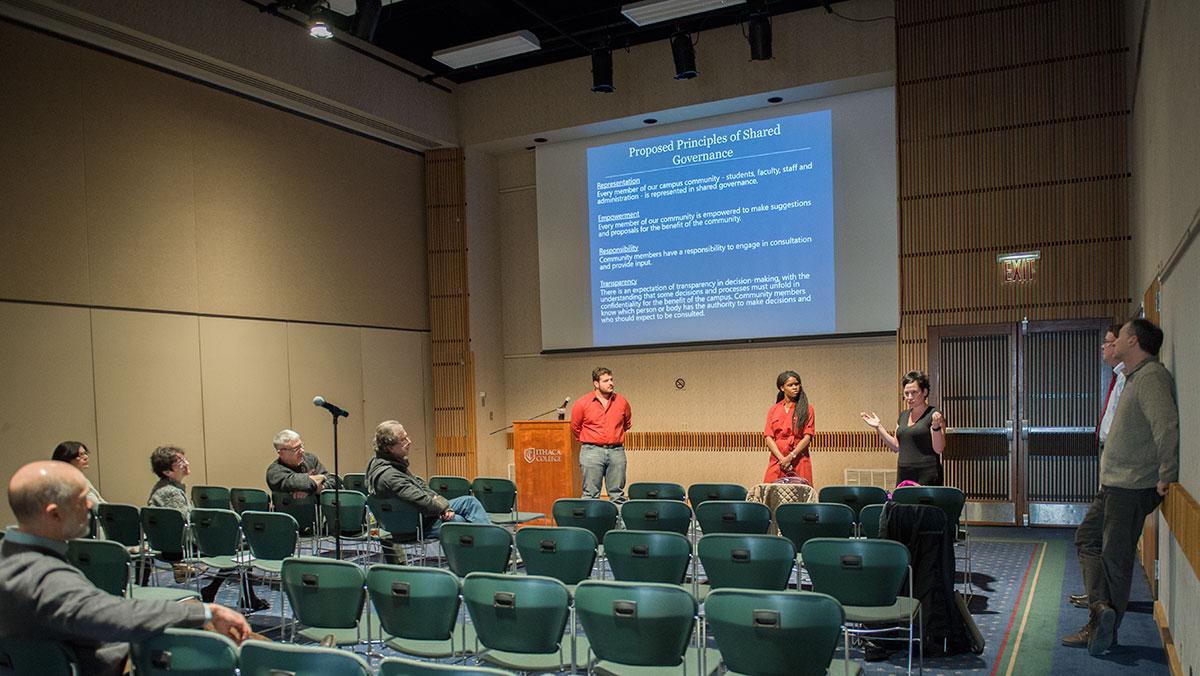 In an effort to implement a structure of shared governance, the Ithaca College Shared Governance Task Force has held listening sessions for the task force to effectively solicit feedback from the entire campus community.

The Task Force, formed over winter break by Benjamin Rifkin, provost and vice president for educational affairs, held the sessions March 1, 2 and 3, in addition to gathering feedback from two surveys. According to a Jan. 14 announcement from the Ithaca College Board of Trustees, the Task Force is designed to help devise new ways of fostering collaboration within the college community.

At each session, the Task Force presented a proposal of principles — representation, empowerment, responsibility and transparency — for a model of shared governance.

Seven members of the campus community were present at the March 1 session, largely inquiring about how shared governance would change the current structure of the administration. Sophomore Ryan Opila asked the Task Force how it would fit into the pre-existing structure of governance.

“This is step one,” said Bonnie Prunty, director of the Office of Residential Life and Judicial Affairs and assistant dean for first-year experiences, in response to Opila’s question. “Step one is shooting for the concept and the theory. What does that model we create hope to achieve? What’s our target?”

Opila said he was afraid the student body does not have much active representation in administrative decisions.

Senior Dominick Recckio, SGA president and Task Force member, said with the Task Force, he can have direct involvement with the administration with initiatives such as creating a safe space.

“The safe space doesn’t end up being designed by Facilities Planning,” he said. “It can be designed by the students who need the space.”

Peter Earle, multimedia lab technician and Staff Council member, said governance reform should begin with the board of trustees.

Rifkin responded by saying there might be misunderstanding on campus about what New York state law dictates about the board’s relationship with the college.

“The board of trustees isn’t interested in being interested in day-to-day decision-making on campus,” he said. “The board is interested in monitoring the campus’s financial stability and doing what it can in its standing in the state, and in the nation and in the world as an institution of higher education.”

At the March 2 meeting, six members of the campus community were present including third-shift staff members. Tati Herold, administrative assistant in the School of Health Sciences and Human Performance and recording chair of Staff Council, said third-shift staff members are typically left out of Staff Council’s meetings due to their work shifts beginning late at night and ending in the midmorning.

According to the Task Force’s presentation, only the Faculty Council can directly submit proposals for administrative decisions to administrative committees, and the Staff Council and the SGA have no systemized method of proposing administrative suggestions.

“It’s important that we continue to think about how we can include everyone, and that really includes these other groups as well,” Recckio said.

SGA Senator junior Tim Conners said the Task Force’s ability to deliver on the needs of its constituency is just as important as its transparency to the campus community.

“I think not only being transparent, but being able to deliver,” he said. “When people feel like it impacts them, they want to be involved in that process.”

“When someone doesn’t really know what it is and they’re not confident in it, they’re not going to come and try to talk about it either,” she said.

In response, Recckio said he hopes that one day they can have completely inclusive discussion from all campus community members and that is going to require visualizing the potential structure of shared governance.

At the March 3 session, 12 campus community members were present. Staff members said they did not know how they can contribute to a shared governance initiative and that they felt disconnected from the administration and its decisions.

Prunty responded by saying the Task Force still needed to develop a model to include the entire campus community.

“When we talk about responsibility, I think what we’re talking about is just the fact that the campus is asking for a better system,” Prunty said. “Once there’s a model that the campus somehow agrees on, people need to find a way to participate.”
Following the listening sessions, a survey open to the campus community was released to solicit feedback on the proposed principles of shared governance and the next steps for the Task Force. The Task Force declined to disclose any information about the sessions until they convene as a group.