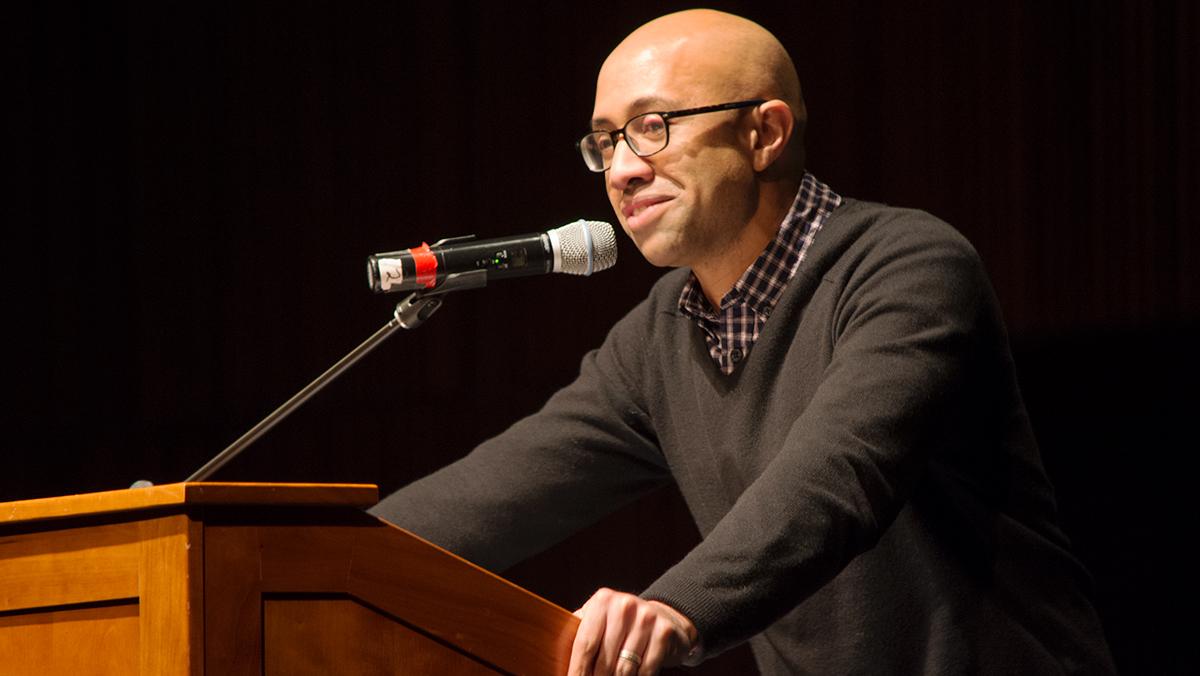 Ted Zerivitz/The Ithacan
Keynote speaker Russell Rickford, associate professor in the Department of History at Cornell University, discussed how King's legacy was transformed from the radical activist he was to a more tame icon of the civil rights movement.
By Ben Kaplan, Meaghan McElroy — Staff Writer, Staff Writer
Published: January 25, 2017

Ithaca College has continued its tradition of honoring the work of Martin Luther King Jr. by celebrating MLK Week, with the events of this year reflecting on the more radical ideas of King and how they relate to recent events.

The events of this year’s celebration are centered around “the ultimate weakness of violence,” a topic taken from King’s last book, “Where Do We Go From Here: Chaos or Community?” RahK Lash, assistant director of multicultural affairs at the Office of Student Engagement and Multicultural Affairs and member of the IC MLK Celebration Committee, said via email that the theme of the week and the events planned for the celebration were all well-thought-out and intentional.

“We had to ask ourselves some real and difficult questions that mattered,” Lash said. “We had to acknowledge our power to create the narrative for the week. We took into consideration the long-standing violence around us. The committee was a pretty dynamic team.”

The MLK Campus-Wide Celebration began Jan. 23 with the School of Music’s Annual MLK Celebration Concert, where students, faculty and alumni performed jazz and gospel music. The following day, the college hosted Russell Rickford, associate professor in the Department of History at Cornell University, as the keynote speaker. On Jan. 25, the freshmen MLK Scholars presented on the Civil Rights Tour they took during the fall semester.  Additionally, the film “Tangerine” was shown to shed light on violence towards the transgender community. Storyboard P, a flex dancer from Brooklyn, New York, will be performing at 7:30 p.m. on Jan. 26 in Clark Theatre. The week will end with the MLK Day of Service on Jan. 28, where students from the college will volunteer in the community as part of a national movement to honor King’s vision of communities working together.

Rickford spoke mostly about the reality and the myth of King’s work. Specifically, Rickford emphasized that King was seen as a radical and a terrorist during his own life, but over time, his legacy was transformed into a more tame icon of the civil rights movement.

“The King you know never existed,” Rickford said. “He is a fraud, an imposter. This King was manufactured. He was designed to validate and preserve the status quo, to mislead and pacify. … The King you know was sent from the future … to bury his meaning, to decontextualize the movement that produced him, to smother the democracy for which he fought.”

Senior Samantha Ampel, who attended the speech, said she thought Rickford’s points on revisionism were important to consider during the events of the week.

“We have a white revisionist picture of Martin Luther King, and I think that expands to a bigger issue of a white revisionist view of our entire history,” Ampel said. “I think he shed a lot of light on that in a way that was easy to understand, and I think that helps people to really rethink Martin Luther King Week as a whole.”

“We have a line where we say, ‘We glorify our heroes so much, we forget they’re human,’” Nelson said. “I think, over the years, we’ve assigned King this idea of this perfect figure. Yes, he stands for a movement, but if you go in-depth, the things he was doing and saying were … threatening a lot of what America stood for at that time.”

Rickford also spoke about considering King’s legacy in the context of current events — notably, the new Trump administration and the protests that are stemming from it.

“I think it’s really important in this moment … to recover the radical movement and to recover the radical King,” Rickford said. “Those models are deeply instructive and deeply important in the moment when folks have lost faith in the political establishment and mainstream institutions. I think those lessons of mass mobilization and self-organization … are incredibly significant.”

The 12th annual civil rights presentation highlighted the experiences of the freshman MLK scholars from their time attending the Civil Rights Tour in Georgia and Alabama in the fall.

In an opening statement, Melinda Smith, director of multicultural affairs and coordinator of the program, reiterated that the MLK Scholarship is more than just a scholarship, but a program that focuses on personal and academic achievement, social justice service, leadership development and international education through engagement in meaningful learning opportunities and experiences such as the tour.

“As the MLK program enters its fifteenth year here at Ithaca College, it continues to strive to develop future leaders and global citizens who are committed to promoting social justice in their personal and professional lives,” Smith said.

The presentation featured performance, visual, and written components including a rendition of Pete Seeger’s song “We Shall Overcome” and a video montage that contrasted historical footage of both plight and activism with video of the scholars’ trip and modern movements. All of the performances explored themes of police brutality, segregation and self-acceptance, among others.

Sophomore Jaleel Green, who attended the event this and last year, said he found hearing each scholar talk about their personal revelations and connections to the movement extremely powerful.

“For me, the takeaway is that the fight is not over,” he said. “You should always keep your mind open. You shouldn’t be afraid to ask questions and to keep learning.”