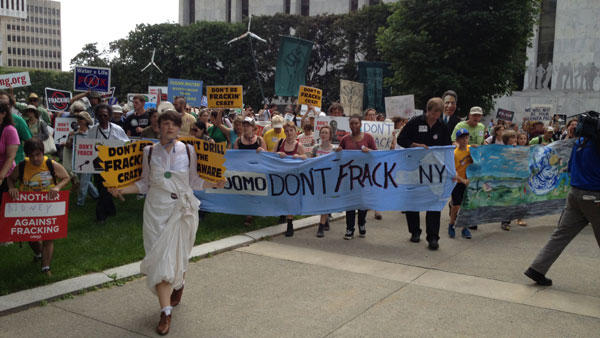 The three-day event, which began Aug. 25, was endorsed by more than 60 grassroots organizations working to protect New York from fracking, an extraction process that pumps sand, water and chemicals into the ground to release natural gas trapped underground.

Senior Ren Ostry, who has led many protests on campus and in the Ithaca area, helped organize the Albany event. The weekend began with leadership development and direct action trainings, culminating in Monday’s march. Ostry said the rally began at a local Albany park, and the march to the Capitol included a stop at the state Department of Environmental Conservation, where some anti-fracking street theater — which included a puppet of Cuomo — was performed.

The rally ended with Sandra Steingraber, a distinguished scholar in residence and environmental studies and science professor at the college, leading a ‘human microphone’, also called a mic-check.

“At the end of the day — which in my opinion was the highlight — Sandra Steingraber mic-checked the [anti-fracking] Pledge of Resistance to the crowd, and people raised their fists in the air,” Ostry said.

Ostry called the event the ‘last appeal’ to Cuomo, but she said his decision is not actually the final say.

“We are empowered enough to keep fracking out of the state as individuals,” Ostry said. The power of local movements at the grassroots level can protect New York from fracking, she said.

Mara Alper, associate professor of television-radio on sabbatical this year, was also involved in the protest. Alper said she has previously protested fracking on the local level to protect New York waters.

“I don’t think proper attention has been paid to the health implications, the effect it will have on all of the local communities [and] to the resources New York state has,” Alper said.

“The contamination of New York’s water is certain,” Fox said in the statement. “Surely Governor Cuomo must listen to the science and roundly reject this industrial proposal. We can develop more jobs and energy by announcing that New York aims to lead the world in renewable energy development.”

Ostry said the rally was an opportunity to remind Cuomo that he has a choice to make and to show him what New Yorkers want.

“He is a civil servant and his job is to listen to us, and we had to get loud because he had not been listening,” Ostry said.