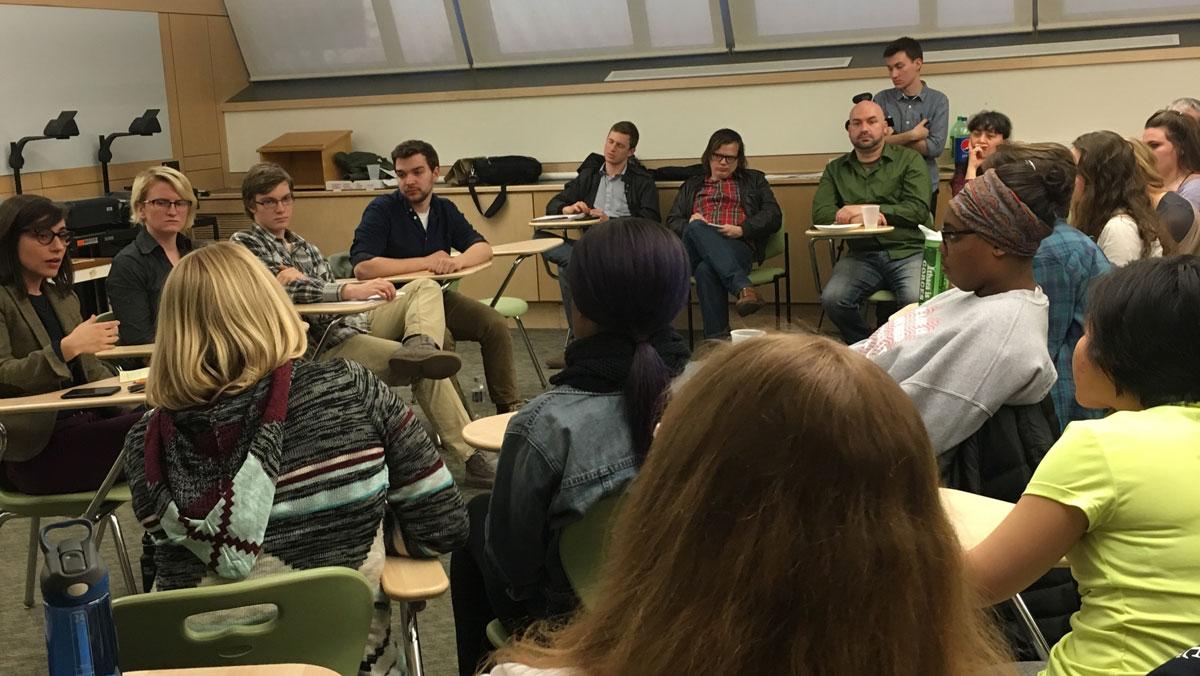 Evan Popp/The Ithacan
Over 50 Ithaca College faculty members and students gathered April 14 in Job 160 for a teach-in about working conditions for part-time and full-time contingent faculty at the college, as well as the movement to join the union, which part-time faculty are a part of.
By Evan Popp — Staff writer
Published: April 15, 2016

Over 50 Ithaca College faculty members and students gathered April 14 in Job 160 for a teach-in about working conditions for part-time and full-time contingent faculty at the college, as well as the movement to join the union, that part-time faculty are a part of.

The event comes in the wake of the administration’s rejection of the request by full-time contingent faculty — non-tenure-track faculty — to join the existing part-time faculty union on campus, Service Employees International Union Local 200United.

Shoshe Cole, assistant professor in the Department of Physics and Astronomy and a full-time contingent faculty member, said that following the denial, a petition was filed with the National Labor Relations Board requesting that a vote be held to form a union. Cole said the vote will most likely happen in early to mid-May and the full-time contingent faculty expects to get the votes necessary to join the part-time faculty union.

Cole said it makes sense for full-time contingent faculty to unionize with part-time faculty because there are many people who go back and forth between being part-time and full-time contingent depending on the needs of their department. Sarah Grunberg, a part-time lecturer in the Department of Sociology, added that having one union for the two groups would be beneficial because both groups have similar interests and problems with their contracts.

Grunberg spoke at the teach-in about the insecurity of being on short-term contracts and said there is always the risk contingent faculty members — who operate on year-to-year or semester-to-semester deals — won’t be offered another contract.

“I was in an office with another part-timer at one point, and I had received word that I had a contract for the next semester, and she didn’t, and she was a mother, and she said to me ‘I have no idea what I’m going to do now. I have to start applying for jobs,’” Grunberg said.

Grunberg also noted the low compensation of limited-term contract faculty. She said one in four adjuncts is on some form of government assistance. She said it is important for students to be involved in and support the unionization effort and to realize that contingent faculty working conditions impact them too.

Senior Elisabeth Galluzzo, who attended the teach-in, agreed and said it is important for students to support unionization efforts by faculty. She said because contingent faculty operates on short-term contracts, it makes it hard for students to tell if a favorite professor will still be at the college.

“What classes are going to be taught next semester? Am I going to have the reinforcement from the same professors that I’m comfortable with?” Galluzzo asked.

Jon Hilton, an instructor in the Department of Media Arts, Sciences and Studies, said he has been working at the college for 22 years on one-year contracts. He said the value of unionization is that it will provide stability for students, faculty and academic departments.

“Our programs are like a jigsaw puzzle put together, and when we lose a contingency person for whatever reason, it’s like we lost a piece of the jigsaw puzzle forever, and your program no longer goes together as well as it did,” he said.