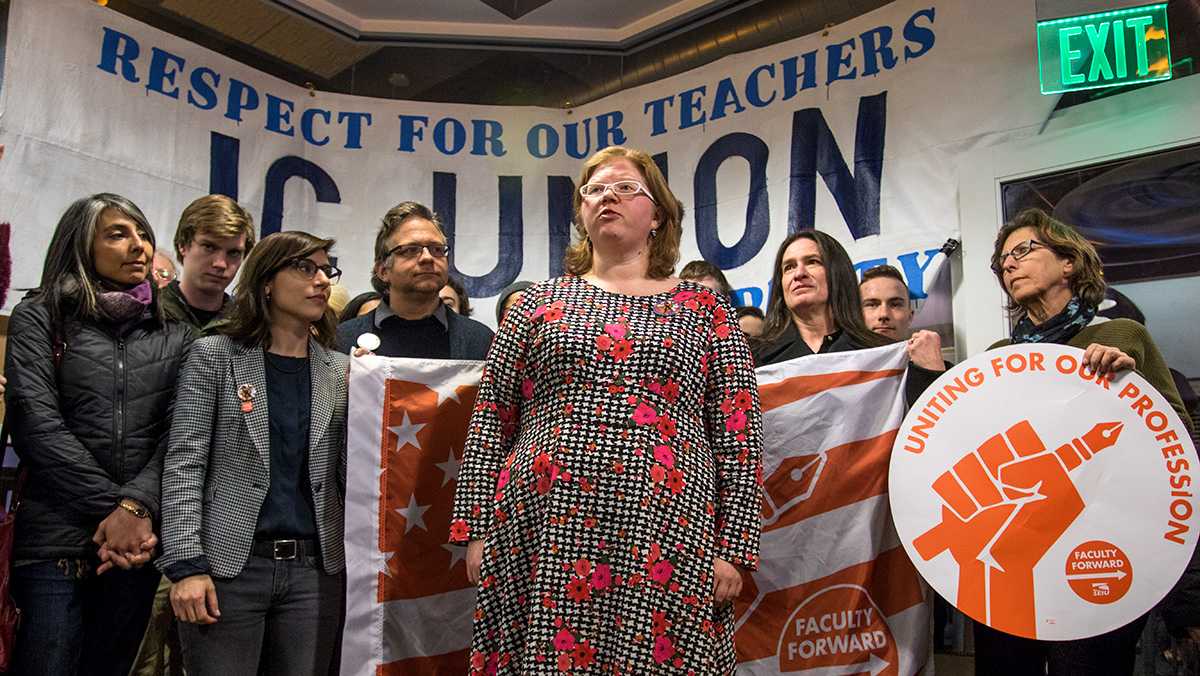 Sam Fuller/The Ithacan
Megan Graham, assistant writing professor, along with faculty and student supporters, announced Feb. 14 that the strike vote had passed — giving the unions authorization to take actions up to and including a strike against Ithaca College.
By Grace Elletson — News Editor
Published: February 14, 2017

Of those who voted, 88 percent of part-time faculty and 88 percent of full-time faculty voted to authorize a strike, said Megan Graham, assistant professor in the Department of Writing, at a news conference held by the unions Feb. 14. However, the unions would not release how many total part-time and full-time faculty members voted at this time, a Service Employees International Union representative said, and they did not know when the numbers would be released. For the 2016–17 academic year, there are reportedly 406 contingent faculty members at the college — 249 part-time and 157 full–time.

The strike vote does not necessarily mean the unions will hold a strike, but Sarah Grunberg, instructor in the Department of Sociology, said that if the college does not present proposals for a clear pathway toward pay parity for part-time faculty and increased job security for full-time faculty at the Feb. 21 and 24 bargaining meetings, a strike could occur.

“The college…believes that any strike action while continual progress is being made, while negotiations are on the way, would be premature,” Maley said.

The press conference was held in the Fishbowl in IC Square and was packed to the brim with students and faculty supporters. One of the student supporters, senior Taylor Ford, runs the IC Students for Labor Action group and said the group is currently strategizing different efforts to encourage the administration to meet the union’s demands.

“There are certainly students who would be willing to stand in solidarity with their professors because this is really in their long-term interest, even if they’re missing a few classes in the short term,” Ford said.

As of Feb. 14, 10 departments at the college have expressed their support for the contingent faculty unions and have refused to fill their positions if a strike did occur. Patricia Rodriguez, associate professor in the Department of Politics and Latin American studies coordinator, spoke at the press conference in support of the unions and called their mobilizing efforts admirable.