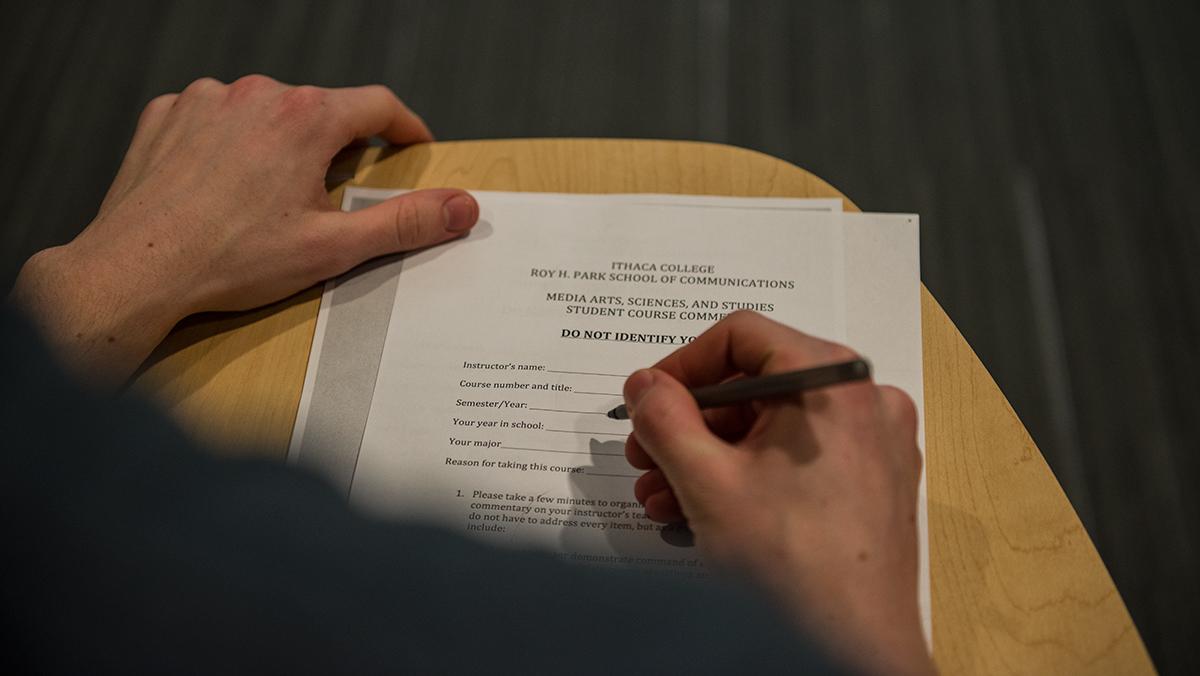 A preliminary discussion was held at the Dec. 1, 2015, Faculty Council meeting about the positives and negatives of conducting course evaluations online collegewide. Benjamin Rifkin, provost and vice president for educational affairs, advocated for the switch. He said moving evaluations online provides more instant feedback for professors, students’ handwriting wouldn’t give away their identity, and the college would save money.

Rifkin said the previous school he worked at, The College of New Jersey, had a successful switch to conducting evaluations entirely online.

Perry Benedict, a freshman majoring in cinema and photography, said he would prefer online evaluations because they’re more accessible for students. He said he thinks there should be some sort of incentive to encourage the student to complete the evaluation and would support tying the completion of the evaluation to the student’s grade.

Currently, there is wide variation in how course evaluations are handled within schools and even individual departments.

The School of Business is the only school at the college that has all evaluations done online. According to sources in the business school, the switch was made in 2013.

Vivian Conger, associate professor in the history department in the School of Humanities and Sciences, said her department conducts its evaluations on paper. She said she wouldn’t be “adamantly opposed” to having evaluations online but feels that by moving them online, they would have more of a “rate my professor” effect.

“If students are going to bother to fill out the forms outside of class, it’s because they either hate or love the professor,” Conger said.

Rifkin said he does not know what the next step is for moving student evaluations online but expects there to be more conversation about the idea from Faculty Council and the Academic Policies Committee.

“If we are to make a shift as a college, I think it would be useful for us to discuss how to do this and use the same platform so that students have a similar experience with the forms across all their courses,” Rifkin said.

However, there has been conversation nationally in higher education questioning how effective student evaluations actually are, regardless of whether they’re conducted on paper or online.

Philip B. Stark, associate dean of the Division of Mathematical and Physical Sciences and professor in the statistics department at the University of California, Berkeley, found in a study that evaluations are not as accurate as they seem. He described them as “popularity contests” and that professors’ anxiety about receiving good ratings can encourage them to water down their courses. In another study, Stark found students tend to judge their teachers by their gender, giving their female instructors worse evaluations than their male instructors.

An article by Stacey Patton, senior enterprise reporter at The Chronicle of Higher Education, outlines flaws in the paper evaluations system. Professors could pass out the evaluations when attendance is low, risking unequal representation of opinion. Or, professors could not leave the classroom — even if it’s required — which risks students’ anonymity.

Sergio Pedro, assistant professor in the Department of Modern Languages and Literatures at the college, said he thinks student evaluations give professors a chance to see where they can improve.

“The danger is in the idea that they should be used somehow… to define whether someone is a good instructor or not. Someone is a bad instructor when they keep getting the same negative comment year after year… that clearly should get addressed but hasn’t gotten addressed,” Pedro said.

He said he doesn’t worry about negative evaluations affecting his job, because he addresses them.

Junior Catherine Proulx, an integrative marketing communications major, said exercising student feedback is important to oust bad professors. She referenced one class she took where it was clear teaching wasn’t the professor’s strong suit, and after the class collectively gave the professor a bad review, the professor left the college.

Rifkin said evaluations at the college are not the only data used to assess professors for tenure renewal. Departmental and schoolwide personnel committees are also used to evaluate professors.