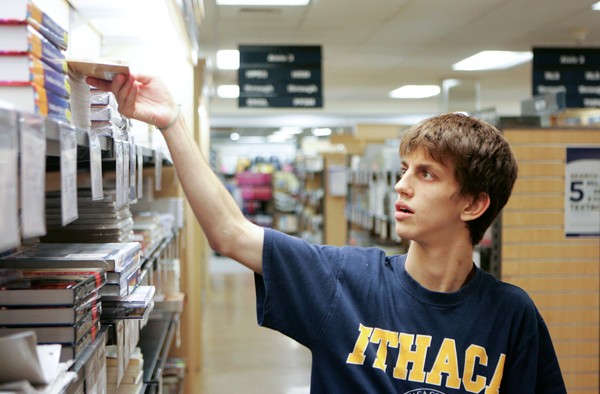 To address a lack of information about textbook requirements for students during registration, the Ithaca College Bookstore and Office of the Provost are raising faculty awareness about an education law that requires early notification of textbook and class material prices.

The Higher Education Opportunity Act, which Congress passed in 2008, requires colleges and universities receiving federal funds to disclose the cost of textbooks and class materials to students by the time they register for courses for the following semester. This will allow students to know the cost of a class. Textbook information at the college is handled by the bookstore.

Marisa Kelly, provost and vice president for educational affairs, said textbook and class material disclosure is only one small aspect of the act.

“It really has to do with ensuring that institutions are acting in the best interest of students,” Kelly said. “That at least is the spirit underlying the law.”

For example, the HEOA allows the federal government to regulate Perkins Loan and Pell Grant increases. It also requires textbooks to be sold separately from class materials in order to eliminate bundled sales to students, unless they are bound by a third-party contract, custom materials or designed as integrated materials.

Though Kelly was unable to provide the percentage of how compliant the college is with the law in regard to textbook information, she said her goal is to be as compliant with the HEOA as any institution possibly can. She said she addressed the Faculty Council to promote the importance of getting textbook lists back to the bookstore on time.

“It’s about making sure we have this information there,” Kelly said. “Anything we can do to make that job easier for the bookstore means we’ll be better and more accurate.”

Kelly said there are some exceptions to the HEOA.

“If a faculty member hasn’t been assigned to a course yet, then that requirement doesn’t apply,” Kelly said.

Rod Beers, textbook manager at the college bookstore, said he sends out textbook adoption forms four weeks before course registration begins and asks professors for a list of books they will be using for class. Beers said this ensures a student can understand how much it would cost to register for a class.

However, Beers said the response rate to order forms is low. He said he addressed this with Kelly in July and that the provost office is going to work to improve faculty response time to the order forms. His goal for this semester is to have information available by Nov. 4.

“I don’t get very good compliance,” Beers said. “Currently what we’ve done is, when you register for a class through HomerConnect at the registrar’s office, you can view course materials. Whereas [when] you are doing the pre-registration, there is not all the information available.”

Beers said the problem can’t be blamed entirely on faculty, as there are logistical issues in planning the next semester.

“It ends up being how the department or the school comes up with who gets assigned to classes,” Beers said. “Not necessarily does everyone get his or her assigned classes on time. You don’t necessarily know what they’re teaching.”

The lack of information has affected students looking to budget themselves for the next semester.

Junior Jennifer Snyder said she’s had several professors email her textbook information about a week before classes start, making it more difficult to find cheaper textbooks in a timely manner.

“I need to have the time to research different areas to find the best price,” Snyder said. “It’s really inconvenient when I’m not planning out what I have to order until the week before classes start.”

Though this is an issue the college needs to address, Beers said not all departments fall behind in submitting their forms. Beers said the School of Music, as well as the departments of Physical Therapy and Occupational Therapy, usually get textbook information back before registration begins. However, the School of Humanities and Sciences is often behind.

Kellie Mooney, administrative assistant in the Department of Physical Therapy, said she returns the textbook information to Beers within three weeks of receiving them. She said the physical therapy department courses are predictable.

“We follow the curriculum, so from semester to semester we know what courses are offered,” Mooney said.

Leslie Lewis, dean of the School of Humanities and Sciences, said in an email that she believes this might stem from a lack of awareness of the HEOA. She said that increased faculty familiarity should resolve much of the problem.

“I suspect that faculty in the Humanities and Sciences have not been aware of why the bookstore has needed book orders in a timely manner,” Lewis said. “Now that they know more about the issue, I’m sure we’ll see much more compliance.”

Correction: An earlier version of this article reported that  Title IV financial aid could be pulled for noncompliance with the textbook disclosures, but this is not true.  It was also reported that textbooks could not be bundled with class materials. However, they are able to be bundled under certain circumstances.