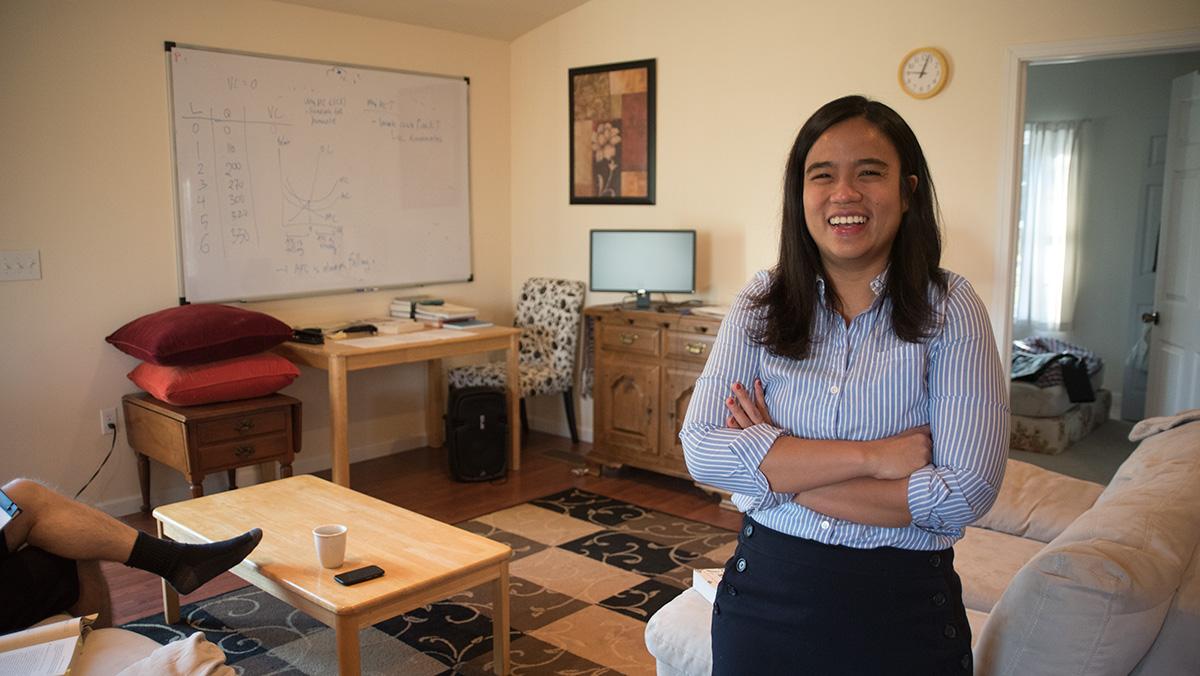 Amanda den Hartog/The Ithacan
Puspa Amri, assistant professor for the Department of Economics, stands in the living room of her home in Ithaca. Amri said she advertised herself to renters online before she moved from California.
By Grace Elletson — Staff Writer
Published: November 4, 2015

Ithaca College faculty are faced with the challenge of finding both affordable and suitable housing in Ithaca — a city that isn’t necessarily known for either, said several faculty who have experienced the housing and rental market.

Faculty who move to Ithaca struggle to find housing that is both adequate and affordable. The city was ranked 11th on a list of the cities where rents are highest compared to median gross income in the United States, according to a study done by The New York Times in 2014. This is compounded by a national in higher education: The Chronicle of Higher Education reported that many colleges across the country don’t help professors with the housing search, especially when moving from long distances.

Jennifer Spitzer, an assistant professor for the Department of English, said she struggled to find a suitable rental when she first moved to Ithaca two years ago. She said she had a difficult time finding suitable housing because she had to find a place to live in a single weekend at Ithaca, so she didn’t have many choices. She settled for a rental until she could find a house.

When Spitzer began looking for a house, she realized that the market was lacking in middle-class housing.

“There is a real deficit in medium-priced housing here. There’s a collect of poor quality, older and small homes that sell for maybe $100,000, and then there’s a lot of really expensive houses that are [in the] $500,000 range,” Spitzer said.

Ithaca is currently suffering from a lack of housing, said Lynn Truame, Ithaca community development planner. She said the rental vacancy rate is currently at 1 percent, compared to a typical desirable vacancy rate of 5 percent, causing the high cost in market prices. However, Truame said professors have an advantage in this tricky housing market.

Truame said she thinks the housing market isn’t a deterrent to professors because they can afford it. The average professor at the college makes about $100,000 a year, and associate professors make about $80,000, according to data from The Chronicle of Higher Education. Her concern lies with the people at the lower end of the income spectrum who can no longer afford to live in Ithaca because of rising market prices.

“People who have been here, with service industry jobs, are getting pushed out of the market,” Truame said.

She said the prices are rising simply because of supply and demand. She said the school districts and appeal of the culture and job market makes many people want to move to Ithaca.

Chris Holmes, assistant professor in the Department of English, moved to Ithaca in 2012. He said many people who wanted to live in downtown Ithaca either thought apartments were too expensive or very run-down. According to Zillow, an online real estate marketplace and database, the median rental estimate for all housing in Ithaca is $1,771 a month as of September 2015.

He also said he thinks buying is a much better option than renting in Ithaca.

“Rental prices are very high, and there just aren’t enough,” Holmes said. He referred to the issue that Mayor Svante Myrick is tackling in order to retain funding for public housing in Ithaca.

Puspa Amri, an assistant professor for the Department of Economics, moved to Ithaca this August from California. Because she was still living in California while searching for housing, she decided to advertise herself online as a tenant and let renters come to her.

“I had very specific preferences, but still got a lot of responses,” Amri said.

She said her job and characteristics made her an attractive rental candidate as she identified herself as a professor.

“Having a job at a university would signal the ability to meet the responsibility of the tenant profile that they like,” Amri said.

Truame agreed that professors from both Ithaca College and Cornell University have an advantage when looking for housing in Ithaca because tenured faculty have more security as renters than a family living with the help of public assistance would.

Amri said while she was lucky with all the options that came to her, she said that process was still very difficult, especially since she was searching from California.

Spitzer agreed. She said at a previous job working for Harvard, they would assist faculty in looking for housing. Cornell also offers temporary housing assistance to professors.

The college does offer some monetary assistance to faculty moving to Ithaca, depending on bargaining and how far away the faculty member lives. The college will reimburse qualified expenses, which includes the cost of moving personal belongings and lodging, while making the move.

Kirra Franzese, director of talent management, said the school does offer resources to professors if they need help finding a place to live. She said she would direct faculty to the college’s website for information about housing and the Office of Human Resources can help direct faculty to real estate services to help them.

“We will connect [faculty] to resources, but the responsibility is on faculty to decide where they’re going to live,” Franzese said.

Franzese said the college does have some temporary housing available for professors as a last resort, but it’s often already being used.

“Unfortunately, more often than not, there isn’t anything available,” Franzese said, referring to the temporary housing.

She agreed that the college could look into potentially adding a relocation firm to help faculty with the transition.

“I know it would help incoming employees if there was a more streamlined process,” Franzese said.