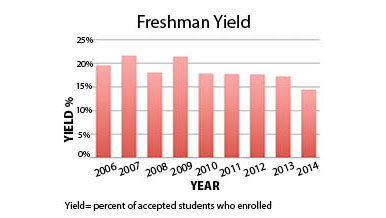 The under-enrollment by about 150 students for the Class of 2018 is creating a financial setback for Ithaca College, but the college has the means to compensate for falling short of its target of 1,700 students, Eric Maguire, vice president of enrollment and communications, said.

For the current fiscal year, the shortage results in a financial loss of about $4.6 million for the institution, Gerald Hector, vice president of finance and administration, said. However, Hector said the college is financially prepared to handle this loss.

“The planning that the college has been doing over the last year, year and a half, has positioned us very well to address this issue,” he said.

About $1.5 million will be covered by the contingency fund, a carefully allotted amount of money already built into the budget for enrollment shortfalls or damages, Hector said.

He also said another initiative for long-term saving is shifting toward a strategic sourcing of the college’s expenditures, where the college would purchase items and supplies in bulk and through one source rather than several departments buying from multiple vendors. This, Hector said, would result in discounted prices through big-volume purchases.

Hector said this more centralized system is estimated to take about 12–18 months to be fully implemented. In addition, with this method, Maguire said, the college estimates to save about half a million dollars for the current fiscal year, procuring millions of dollars in savings over time.

Thus, he said, the enrollment shortage this fall is not likely to affect the college negatively in the long run.

“I don’t think this is a long-term problem,” he said. “I think this is a matter of growing pains as our application pool has grown and adjusting to that larger applicant pool, more so than it has been a broader systemic problem.”

The college is still working through the issue of looking at vacancies in staff or faculty positions as another means of addressing the monetary shortage, Hector said.

Peter Rothbart, professor of music theory, history and composition, and chair of the Faculty Council, said vacancies are created when members leave of their own volition or when the college evaluates an empty position and decides whether it is needed.

“That’s probably the least painful way of dealing with it, though it could affect programs,” he said.

Rothbart said the other avenue for saving money through vacancies is by laying off occupied positions, but the procedure for doing so is meticulous and a last resort.

“I personally don’t expect that they will go there,” he said. “There are other ways to find extra money. But they did open the door that there is a possibility for faculty and for staff, bearing in mind that periodic attrition isn’t necessarily a bad thing.”

Amanda Lippincott, chair of Staff Council, said there has been open communication between staff and administration about feedback on the college’s efforts to save money while maintaining staff efficiency.

“Administrators have been very receptive and supportive of our interest and involvement,” she said. “We strive to communicate respectfully regarding challenging and sensitive issues, and are deeply appreciative for the opportunity.”

Under-enrollment places extra pressure on the college to hit its target enrollment in the coming years, Rothbart said, as the main concern of the faculty is to maintain the college’s academic quality.

With a record-high applicant pool last spring, Maguire said, the college was more selective this year, accepting below 60 percent of the pool, while previous years have averaged a 66 percent acceptance rate. He said greater selectivity had the probability of leading to a lower yield — the percentage of those accepted who decided to enroll.

“Those are all positive things for the institution, it’s just that we couldn’t exactly anticipate where that yield would come in,” he said. “So we learn from this and look to apply those lessons when we move forward in future years.”

Despite the setback, Maguire said, the administration intends to continue increasing tuition by a lower percentile each year. The tuition increase this year was less than 3 percent, which he said is a record low for the past 40 years.

“Our dedication to creating more affordability for our students remains intact,” he said.

Hector said the college’s contingency plans already in place leave the budget in an uncompromised position in the face of a problem like this one.

“This issue is now here, and we are more than able to address it in a very meaningful and substantial way,” he said.