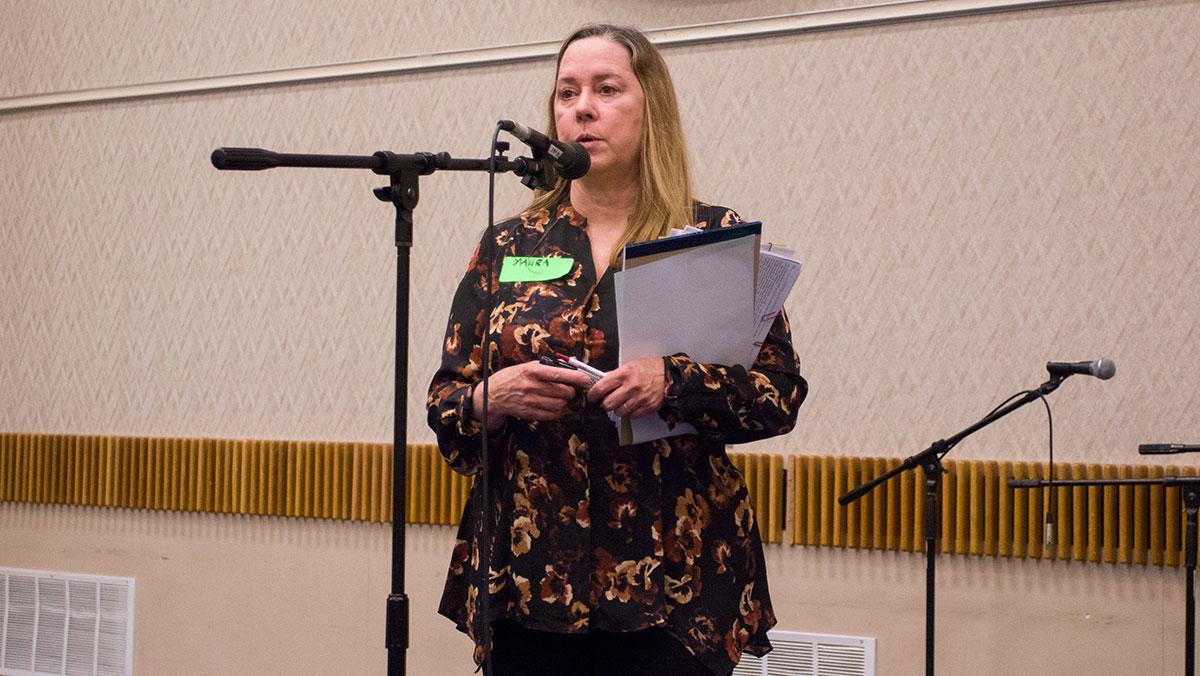 Amanda Den Hartog
From left, Maura Stephens staff member from the Park Center for Independent Media spoke at the event hosted in Emerson Suites to discuss alternative ways of governance, issues they found with the Ithaca College Board of Trustees and diversity.
By Elena Piech and Parita Desai — Staff Writers
Published: March 10, 2016

A group of faculty and staff has hosted an event titled “Campus Celebration & Community Conversation,” to express its frustration with the diversity and inclusion initiatives at Ithaca College.

The Facebook group Faculty at IC was formed in October 2015 as a way for faculty and staff to address their issues regarding administration. The group changed its name to IC Onward following President Tom Rochon’s announcement of retirement, to involve more voices in the movement.

Some original members of the group as well as some students hosted the event 7:30–9 p.m. March 8 in Emerson Suites to discuss alternative ways of governance, issues they found with the Ithaca College Board of Trustees and diversity, as well as to celebrate progress students and faculty have made in the past semester regarding these issues. Ten faculty and staff members and 16 students, including six members of POC at IC, were present for the event.

Patricia Rodriguez, associate professor of politics, said that after listening to students’ input at the event, she realized faculty members still have more to learn regarding students’ experiences and understanding how they can be of help to students.

“We need to think of the problems in greater depth and perhaps move to take some steps together,” Rodriguez said. “But most of what came out was — in essence — is the need to come together for more conversations like this.”

Staff members, including Maura Stephens from the Park Center for Independent Media, brought up concerns they had regarding the board of trustees. Stephens said she finds issue with the majority of board’s members’ having ties with corporations.

Stephens added that she believes that students, staff and faculty have to be the driving force for any change they may want to see.

“When we’re pressuring the board of trustees to become the kind of collective community governance that we’re looking for, we have to remember that we don’t have to listen to their top-down directive. We need to force them to create the kind of inclusive, sustainable community that we want.”

A packet was placed on every table, along with other papers, detailing whom IC Onward would like to see the college look at as potential presidents. The list included eight names, with suggestions like Noelle Witherspoon Arnold, associate professor of the Department of Educational Studies at Ohio State University, and Freeman Hrabowski III, the president of University of Maryland, Baltimore County.

Jennifer Jolly, associate professor and chair of the art history department and one of the original members of IC Onward, said the group has a long way to go until it can celebrate changes made regarding diversity and inclusion.

“I know this is supposed to be a celebration,” Jolly said. “But I have to confess, for this part of our challenge, it does not feel like we’re ready to celebrate.”

Jolly also questioned what professors are doing to address issues of diversity within their department.

“I look around at the various departments,” Jolly said. “I feel like whenever I’m in a group of faculty, I try to ask the question, ‘What is your department doing to address diversity and inclusion?’ And I don’t hear very much.”

“Students, currently, are unaware of the part-time faculty who taught them on this campus,” Grunberg said. “It’s important to understand that 30 percent of your faculty on campus are part-time.”

Senior Dominick Recckio, president of the Student Government Association, spoke at the event and afterward said he hopes IC Onward encourages future mobilization at the college.

“I hope that it’s another collective start for students, faculty and staff communicating together, and to having hard discussions,” Recckio said. “There was a lot of poignant and powerful critiques in the room tonight, and I take a lot of those seriously.”