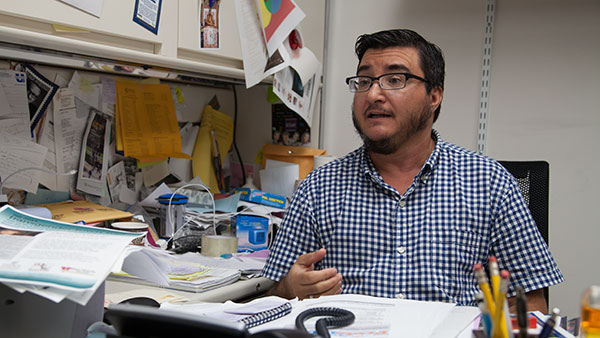 In time for LGBT Center Awareness Day on Sept. 15, Ithaca College has been ranked on Campus Pride’s Top 50 LGBT-Friendly Universities and Colleges list for the third consecutive year and is continuing its success with upcoming programs.

Campus Pride, the national organization that works to create a safer environment for lesbian, gay, bisexual and transgender students, has included the college on its list since its creation three years ago. This list is based on responses to the Campus Pride Index, which considers self-assessments of LGBT-friendly policies, programs, practices and admission efforts. LGBT Center Awareness Day is a national observance every year, but this is the first year it is including campus-based LGBTcenters in addition to community-based.

“I am very pleased and love being a part of a campus community that wants to do the right thing when it comes to welcoming and affirming all of our students,” Maurer said.

The official observance of National Coming Out Day is Oct. 11. Maurer said the LGBT center encourages the campus community to take part in the LGBT activities that are happening around the date.

Maurer said the center’s biggest upcoming event is Chocolate in the Chapel, where all members in the LGBT communities on campusas well as the chapel communitiesget together for a social to meet each other on Oct. 1.

He said several hundred people usually come to this event, including the college president, Tom Rochon.

On Oct. 8, novelist and cartoonist Alison Bechdel will be coming to the college with a program titled, “Dykes, Dads and Moms To Watch Out For: The Illustrated Life of Alison Bechdel,” to be presented by the Roy. H. Park School of Communications.

Mara Keisling, the executive director of the National Center for Transgender Equality, will be coming to the college Oct. 9 to speak about the national view of transgender rights and what is next in the fight for transgender equality in New York State and nationally.

In addition, the college has introduced the course WGST 22000 Queer Studies as a way of determining the feasibility of adding an LGBTQ Studies Minor to the School of Humanities and Sciences.

Junior Kyle James, president of Athlete Ally, an organization that is dedicated to ending homophobia and transphobia in the sports teams at the college, has been the spearhead behind the minor and said the process of creating a new minor is normally a lengthy process, but in his case, receiving approval from H&S for the course, one of the first steps toward creating a minor, was relatively fast.

“Usually it takes about a year if not more to even get a course,” James said. “The fact that I’ve been able to get a course within the year is remarkable.”

James said the interest in the course has been overwhelming.

“The course filled, I believe, 150 percent in capacity, and there have been several emails from students asking the professor if the course will be offered in the spring,” James said.

Senior Natalya Cowilich, president of Spectrum, a student organization that represents the entire “spectrum” of sexual orientations and gender identities, said she is surprised how long it has taken for the college to get a queer studies class considering this program has appeared on other campuses including Cornell University and Syracuse University.

“There are a lot of colleges who have queer studies programs, but I think it’s great that [the class] is here now,” she said. “I hope people of all identities will take these classes and not just people who identify as some form of queer.”

There are several LGBT groups on campus, including general social groups, the political group Created Equal, Athlete Ally and asexual meeting groups. James said at the LGBTQA Welcome Night that the LGBT Center hosts annually, students watched a video of the three on-campus a cappella groups making a song for The Trevor Project and the Ali Forney Center. The Trevor Project is the leading national organization providing crisis intervention and suicide prevention for LGBT youth, and Ali Forney Center works with homeless LGBT youth.

“In this community, you find acceptance of LGBT students in places you never thought there were,” James said. “We have everything in the spectrum and also allies in groups where people don’t necessarily expect to see allies.”

Maurer said back-to-school is one of his favorite times of the year because students come up with so many great ideas.

“There’s so much enthusiasm and so many good ideas,” Maurer said. “The biggest problem is figuring out, ‘How we do all this great stuff?’”