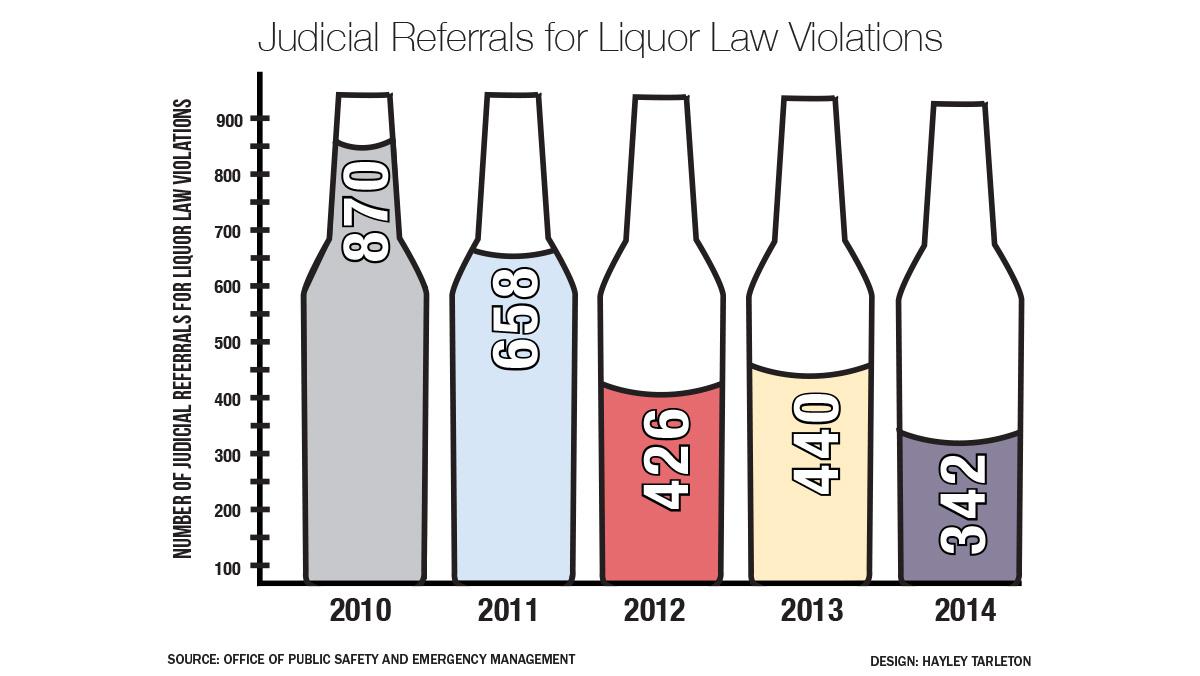 Judicial referrals related to alcohol violations on campus have decreased from 870 in 2010 to 342 in 2014, a decrease of 60.7 percent, according to the Annual Security and Fire Safety Report released by the Office of Public Safety and Emergency Management.

Campus officials offered a number of reasons for why the number of violations has decreased so substantially, attributing it to AlcoholEdu, the Medical Amnesty Policy and a decrease in student drinking.

Nancy Reynolds, director of the Center for Health Promotion, credited the decline in the number of documented alcohol violations on campus to the implementation of the Medical Amnesty Policy in Fall 2010 and to the increase in transparency in the judicial referral process.

The Medical Amnesty Policy allows students to avoid judicial referral and parental notification when they or a friend calls Public Safety in an alcohol-related emergency that is, or seems, life-threatening. Each student can avoid punishment for only one violation, after which he or she will be judicially referred, even if it is a life-threatening situation.

“One of the more prevalent concerns [among students] is that their parents will find out if there’s been an incident,” Reynolds said.

There have been 221 cases in which students received medical amnesty since 2010, said Mike Leary, assistant director of the Office of Judicial Affairs.

All students found with alcohol undergo Balancing Alcohol and Other Substance Use to Improve College Success, a national online alcohol education program that the college adopted in 2007, Reynolds said.

The college adopted BASICS and the Medical Amnesty Policy to educate and help students to avoid dangerous behavior involving alcohol, instead of relying solely on punishment, Reynolds said.

Leary said clearly explaining the judicial referral process to students at orientation and with AlcoholEdu, a national online education program the college adopted and made mandatory four years ago, may encourage students to avoid reckless behavior while drinking.

“Usually we knock on the door and ask the residents to keep it down, but upon opening the door, you discover a few of them may be intoxicated. You can smell the alcohol, and sometimes you can see the bottles,” he said.

RAs were made responsible for reporting alcohol violations in 2001.

Senior Sadia Tabassum, an RA for Lyon and Eastman residence halls, said students tend to party more as they get to know one another more. She said she has already seen an increase in parties just within Block I.

Bonnie Prunty, director of Residential Life and Judicial Affairs, said students and RAs may not notice the decline in violations because there are 130 RAs and a significant decrease in violations may manifest as one fewer violation per RA.

Prunty said the Office of Residential Life doubled the number of RAs in the Quads when the First-Year Residential Experience was brought to those residence halls in 2013, in which there would be two RAs per floor.

“During that same time when we had an increase in staff, we’ve had a decrease in student documentations both by Public Safety and by RAs for alcohol use, so I would believe alcohol use is decreasing,” Prunty said.

Senior Rebecca*, on the other hand, believes drinking is inevitable when freshmen live together as part of their own community. Students can avoid RA patrols because they are regularly scheduled and can get fake IDs or go to bars without much trouble, she said.

During Rebecca’s freshman year, she and her friends on the eighth floor of East Tower drank almost every weekend, she said.

“I felt it was an empowering experience for me to actually be able to look forward to hanging with people who admired me and thought I was cool,” Rebecca said. “And what we did was drink, so that’s what I would do.”

“My hope is that the efforts of our staff to educate students about responsible use of alcohol will continue to see positive results,” Leary said.

*Name has been changed for anonymity

Correction: An earlier version of this article said Rebecca lived in West Tower.