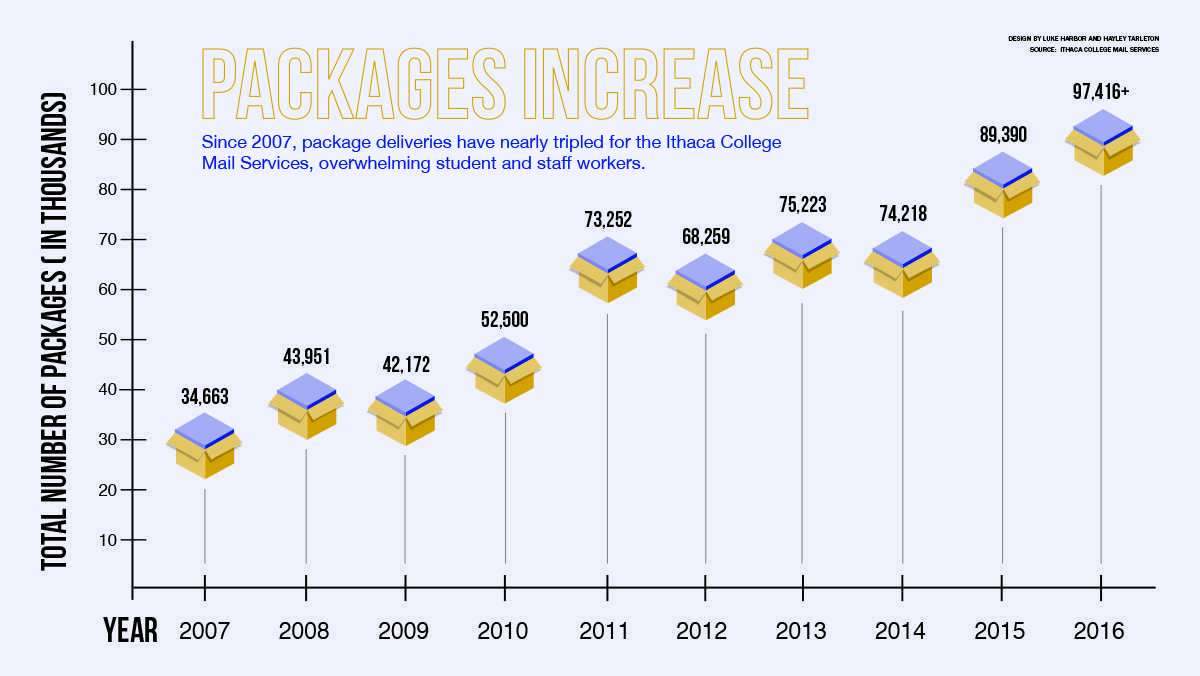 Design by Hayley Tarleton and Luke Harbur
Because students are able to order many different products online through services like Amazon, package deliveries to Ithaca College have soared over the years, causing clutter in the mail rooms.
By Luke Harbur — Multimedia Editor
Published: December 6, 2016

On Black Friday and Cyber Monday, hundreds of delivery packages lined the silver shelves in the Phillips Hall Post Office, where workers struggled to keep up with the haul.

Since 2007, Ithaca College Mail Services has seen package deliveries more than triple — holidays and nonholidays included — which has some staff members calling for an expansion of package facilities like the Phillips Hall Post Office.

“The post office lacks enough space to handle the volume during the delivery peak, which lasts four to six weeks at the start of each semester,” Schlough said. “Taking over a space on campus is a pipe dream because that would mean ousting someone or relocating them. It would rely on a lot of other things moving around.”

Schlough said a large part of this increase comes from textbook rentals and used–textbook purchases from services like Chegg and Amazon.

“Students buy textbooks online and get them one-by-one,” he said. “No longer are they getting them through the Bookstore, when textbooks were shipped in bulk.”

According to a 2015 statement made by textbook–rental website Chegg, the service saved families over $500 million through renting books rather than buying new textbooks in campus bookstores. Schlough also said programs like Amazon Pantry and Amazon Prime provide students with everything they need without having to physically leave the college, which also causes package numbers to soar.

“For freshmen and sophomores who don’t have cars, why would it be convenient to go to a store like Wal-Mart?” Schlough said. “People are ordering their lives online, and we’re distributing it.”

Postal services assistant Cheryl Christopher has worked at the Phillips Hall Post Office for 11 years. She said the peak delivery times for the post office happen on Black Friday, Valentine’s Day, and Halloween, and that that’s when the biggest issues related to space occur.

“The problem is we’re so small in space that we’ve been running into each other,” Christopher said. “So if we had more space, we could get through the line quicker. Usually there’s like a 20–25–minute wait in the line during the peak times.”

David Prunty, executive director of the Office of Auxiliary Services, said the biggest hindrance to expanding the Phillips Hall Post Office is finding enough space. He said he has seen other college campuses successfully solve their excess packaging problems by building a larger campus center or student union space and incorporating a larger mailroom into it. However, Prunty said the college is not planning to build a new structure due to lack of funding, so the problem cannot be resolved easily.

“Most of the packages delivered for students come out of Phillips Hall mail center, and you have to have a building that has a loading dock in order for packages to be delivered,” Prunty said. “It’s pretty complicated to address.”

In response to the apparent lack of funding, Christopher said she is disappointed.

“I was really hoping we could get somewhere that’s bigger or expanded,” Christopher said. “I wish we had a lot more room because we’re really outgrowing this space in the last two to three years. But it is what it is, and they know best.”

Prunty also said many campuses are experiencing issues with overall package increases. The Pitney Bowes Parcel Shipping Index has reported that shipping in several markets around the globe has grown 2.9 percent from 2014 to 2015 and is expected to grow 20 percent by 2018.

“Pete Schlough keeps the people he reports to aware of what’s going on,” Prunty said. “Usually twice a semester he’ll provide us information of what’s happening and what the trends are. Over the last couple years it’s been pretty obvious that the packaging is going up while first-class letter mail is going down.”

Mail Services employs about 35 students per academic semester on average, Schlough said. He said one of the college’s unavoidable funding issues due to the increase in packages will be paying future student employees. New York state law’s requiring minimum wage to be $15 per hour by 2021 could also put pressure on the college’s budget in addition to asking for a larger facility, he said.

“The price of paying wages to students goes up,” Schlough said. “With volumes of packages constantly going up, you can’t keep doing more and more and more work with the same number of hands.”

Students who work in Mail Services said they have noticed an increase in packages. Junior Melanie Kossuth said she has worked in Mail Services for more than two years and has been asked to work more due to the shipment increase.

Senior Oghenero Gbaje has worked in Mail Services for more than three years and said he does not see the need to expand the Phillips Hall Post Office since extra packages can be held in the Bogart Mailroom. But he said he has taken on extra work during peak delivery times of the academic year.

“Peter Schlough is quick to email when there is extra work to be done,” Gbaje said.

“I worked a long temporary shift at the beginning of the year that ended four weeks into the semester.”

“Mail Services is like a small business for many students,” Kossuth said. “Expanding the mail center would benefit the efficiency of getting the mail and packaging shipped out.”