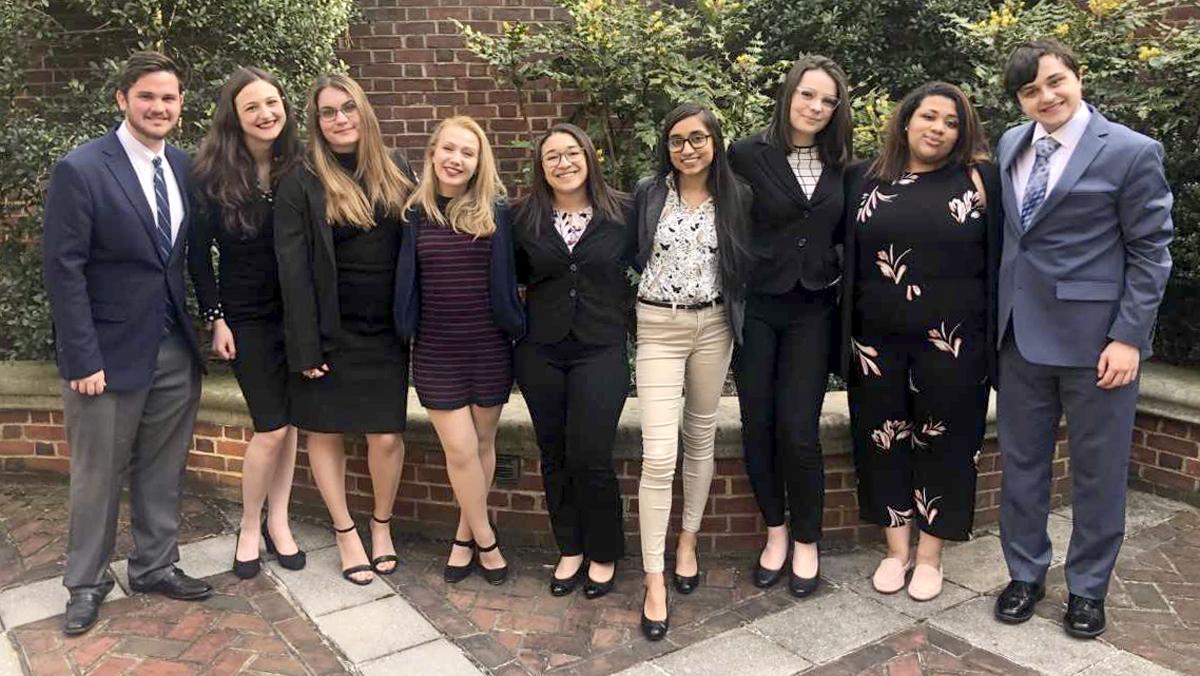 Although the team finished last, this was the farthest the team has made it in competition since its inception eight years ago.

Mock trial is a program that combines law with elements of theater and public speaking. Each year, teams are assigned to a side of a civil or criminal case and then must develop and rehearse scripts and build a substantial legal arguments to prove their points.

Unlike debate teams, which argue for or against certain issues, mock trial teams follow specific legal cases and have teammates act out the roles of attorneys and witnesses.

Even though only the top six teams qualify for ORCS, one team dropped out, and the college’s A team was placed back in the competition.

Shaffer said that despite making it to ORCS due to a dropout, the team was excited to make it to the national tournament.

“A lot of us didn’t think a team would drop out,” Shaffer said. “We were really shocked but really happy.”

Junior Alicia Armstrong, captain of the team, said the members were really excited to make it to ORCS. She said the team was at a disadvantage because it received a late notice that it qualified and, as a result, only had two weeks to prepare while most of the other qualifying teams had four weeks. During that time, the members had to get the team organized, get approval from the college and process new material for the ORCS case.

“We were going into a competition against other big–named colleges who had more time to practice,” she said. “While we obviously were pushing to qualify for nationals, at the end of the day, our goal was to learn from this opportunity.”

Armstrong said that parts of the experience were intense, similar to a real-life courtroom trial, but that the team has learned from this experience and will be more prepared for next year.

“You get excited with every objection and argument that you make and become even more excited when the judge agrees with you,” she said. “[We’re] thinking about next year and what the future has in store for our team.”

Senior Cole Abell, finance director of the college’s mock trial team, attributes much of the team’s success to new members of the team.

“The reason I think we’re here is because of the freshmen,” Abell said. “We had a lot of freshmen interested this year, and they stepped up.”

Shaffer said freshmen usually only play witness roles, but this year, a few acted as attorneys. Abell said six out of the nine members who went to nationals were freshmen.

Andrea Mooney, clinical professor of law at Cornell, began coaching the team this year. She said she has been continually impressed by the team’s work ethic and has high hopes for the future.

“I can’t believe how hard they work,” Mooney said. “I think they have a really good shot for next year.”

Angela Rulffes, assistant professor in the Department of Communication Studies, teaches a mock trial class at the college titled Courtrooms and Communications. Although Rulffes is not officially associated with the college’s mock trial team, she has provided support and ideas to strengthen the team’s arguments throughout the semester.

“I helped them here and there, but this is their accomplishment,” Rulffes said. “I’m really proud of what they’ve done, and they should be proud of themselves.”

Over the weekend, Ithaca College’s Mock Trial team faced its first competition and took everyone — even themselves — by surprise when they qualified for nationals in Hamilton, Ohio, next month.