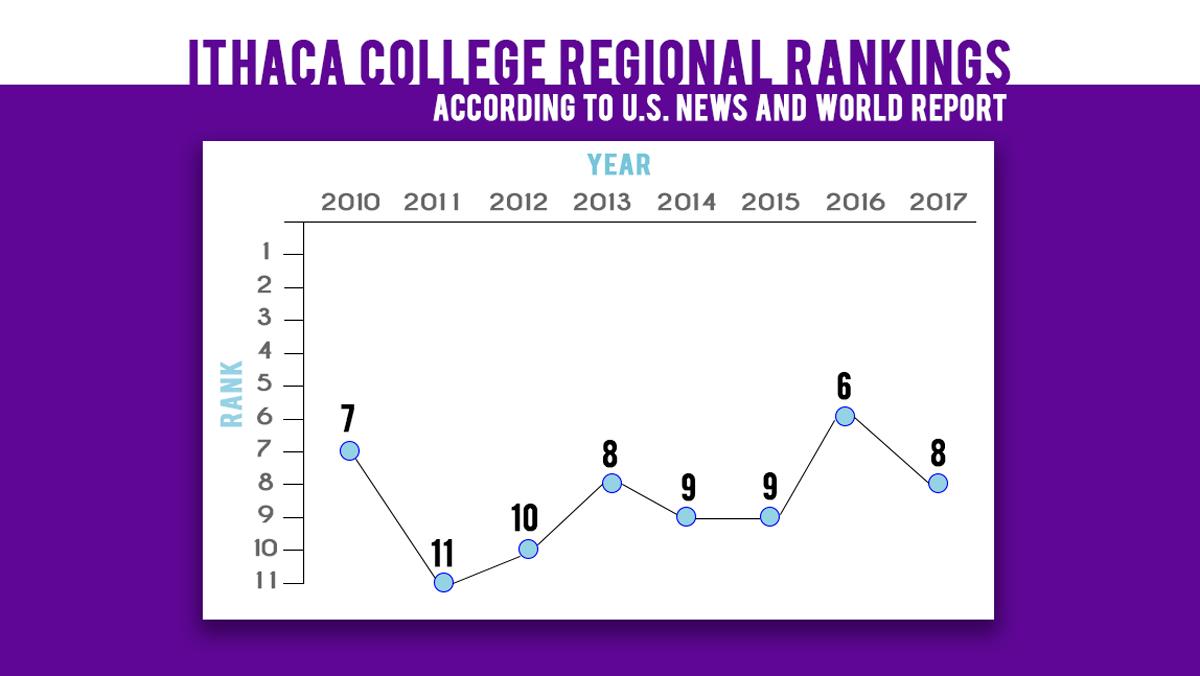 Ithaca College fell from sixth to eighth place in the Regional College — North section when the U.S. News and World Report announced its 2017–18 rankings Sept. 12.

Meanwhile, Cornell University rose from 15th to 14th place on the National Universities list from the report.

According to the U.S. News and World Report’s website, the college standings list is based on several factors, including first-year student retention rate, graduation rates and the strength of the faculty. Other factors such as financial aid, campus life and activities that are not included in the ranking go into picking a college as well. The significance of these rankings is often debated.

Nicole Eversley Bradwell, director of admissions for Ithaca College, said the college’s standing may serve as a starting point for looking at colleges, but the decision process relies more heavily on things such as campus tours and the academic programs that colleges offer.

Over the past 20 years, she said, she has not seen a significant change in the rankings. In the past year, the college has moved only two spots in comparison to the hundreds of schools in the region. The college has been in the top 15 for 23 consecutive years and the top 10 for the last six.

Bradwell said the college focuses on internal factors rather than the ones laid out by organizations who release college standing lists.

“The rankings are not a goal that we set our sights on,” Bradwell said. “We, of course, want to be the best institution we can be, and we work within our community to determine what the goals are that we want to achieve.”

Many colleges, including Ithaca College, feature the rankings on their websites for prospective students to see. On the college’s website, these can be found in the “About” page.

“I’m not certain college rankings are insignificant,” Bradwell said via email. “Rather, they mean different things and have different levels of importance depending upon the audience. … There are many students who never use college rankings as a guide in their college exploration to determine value, while others do use them to discover a school that is a good match for them.”

The college releases a press release annually to highlight its placement in the U.S. News and World Report. In Sept. 2016, then-President Tom Rochon said rankings are one of the tools he hopes students use to pick their institution.

“This is yet another affirmation of the consistent talent demonstrated by our students, faculty and staff,” President Shirley M. Collado said in this year’s press release. “We certainly hope that prospective students and families will take Ithaca College’s high quality and value into account when considering their higher education choices.”

Freshman Sydney Muraoka said colleges’ standings weighed heavily on her decision but were not the sole deciding factor.

“In applying, I relied heavily on ranks to decide which schools were worth paying the application fee for,” Muraoka said. “In the end, the atmosphere on campus is what solidified my decision on Ithaca.”

Freshman Jessica Tornai disregarded these standings when looking at schools. She said she had read articles that stated they were not the best indicator of a school’s value.

“I’ve learned about the fact that magazines and a lot of big organizations use school rankings as a selling point or as something that’s not necessarily true,” Tornai said. “Rankings and a lot of things can be based off of money.”

Gerard Turbide, vice president of the division of enrollment management, said the Department of Analytics and Institutional Research does not do any work or investigation into the college’s placement on lists either.

He said it is nice to be recognized in the top 10 of a ranking but that it is not something that students should base their college decision on.

“College rankings are a way for magazines to sell magazines,” Turbide said.

Turbide emphasized the necessity of an institution being a good fit for students rather than just being a high-ranking college.

“If looking at rankings brings an institution into view for you that you weren’t necessarily considering, I think that’s great,” Turbide said. “But beyond that, students need to be having good conversations with their families, their school counselors, and really, at a certain point, you have to go directly to the source and look at the institution you’re considering.”

Ronald Ehrenberg, director of the Cornell Higher Education Research Institute, did a research study with James Monks, associate dean for undergraduate business programs at the University of Richmond, titled “The Impact of U.S. News and World Report College Rankings on Admissions Outcomes and Pricing Policies at Selective Private Institutions.” The study shows that even if a college says otherwise, their placement on lists can have a serious influence on colleges.

His report explained that when a college drops down, it is prompted to accept a larger amount of students of lower quality and offer greater financial aid to make up for the loss of student applicants due to the lower ranking.

“Although administrators tell you that they don’t care about the rankings, they’re all lying,” Ehrenberg said.

However, Ehrenberg said his study typically refers to colleges that experience a significant change — moving up or down at least five to 10 spots. He said Ithaca College’s move of two spots was insignificant.

EqualApp, a virtual counseling service that provides tools for prospective college students, ranked Ithaca College as one of the 10 best U.S. colleges with acceptance rates of more than 70 percent. But EqualApp’s ranking comes after a year of over-enrollment problems that put the college at 25 percent over its target enrollment.