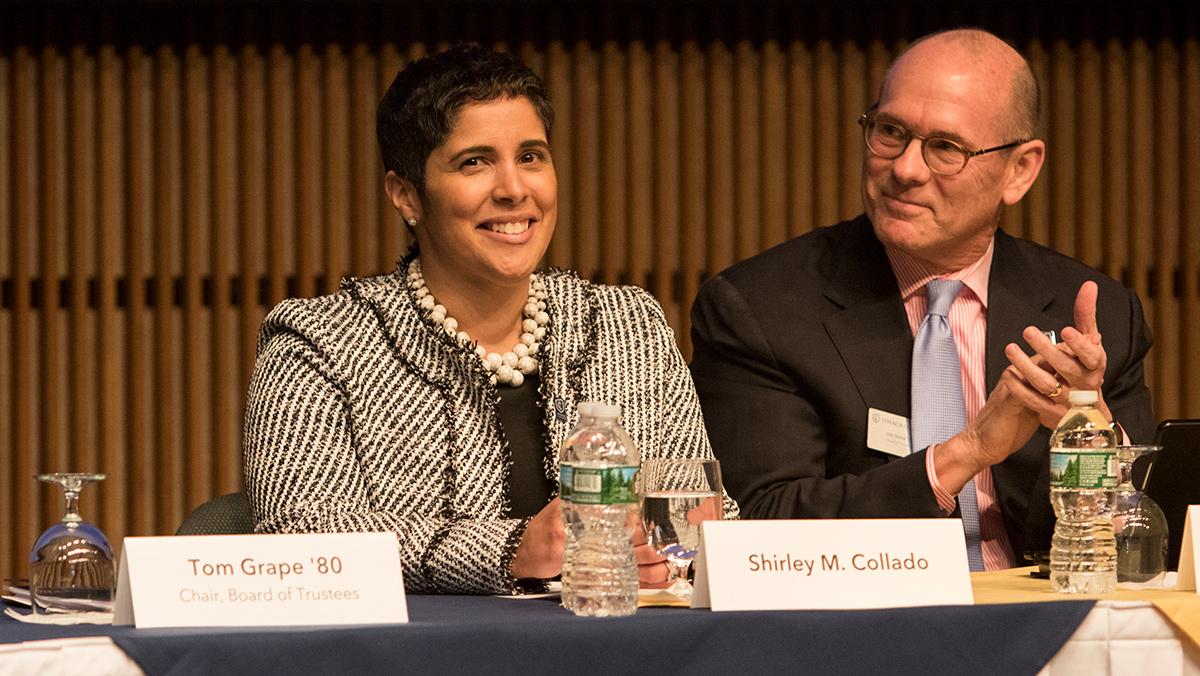 Shirley M. Collado, Ithaca College’s newly appointed ninth president, set the tone for her administration by spending her first full day at the college, Feb. 22, articulating her vision for inclusivity, sharing her personal story and connecting with students, faculty and staff across campus.

Tom Grape, chair of the Ithaca College Board of Trustees, announced that morning in the Emerson Suites that the Presidential Search Committee had selected Collado, executive vice chancellor and chief operating officer at Rutgers University–Newark, to succeed current president Tom Rochon, who has served in the role for nine years. She will officially take office July 1, when Rochon is slated to step down.

Throughout her interactions with the community, Collado — a first-generation college student who grew up in Brooklyn, New York — emphasized inclusive leadership, access to higher education, meaningful residential experiences and an integrated and transparent community as some of her priorities coming into the position.

“As a leader in higher education that has worked across public and private, large and small sectors of the academy and in national nonprofit organizations, I have to tell you honestly, I thought really carefully about the kind of institution that I would lead as a president,” Collado said in her first remarks to the campus community. “Ithaca College’s opportunities and challenges, culture and history, strengths and needs, align so closely to my core values and my strengths and talents as a leader and as a person.”

Collado has held executive leadership roles at numerous public and private institutions over the past 16 years. She was also previously the executive vice president of The Posse Foundation, a nonprofit college access organization for students from public high schools and multicultural backgrounds. A daughter of immigrants from the Dominican Republic, Collado was part of The Posse Foundation’s first cohort of students and was the first person in her family to complete college.

“That’s why this moment for me, for my family and for so many means an enormous amount,” Collado said at the announcement the morning of Feb. 22.

In her position at Rutgers, which she has held since January 2015, Collado oversaw academic and student affairs as well as the university’s strategic plan. She also led the development of the Honors Living-Learning Community at Rutgers-Newark, a residential community focused on college access for students from a variety of backgrounds. Collado earned her doctoral degree in clinical psychology, specializing in trauma among multicultural populations, from Duke University.

Peter Englot, senior vice chancellor for public affairs and chief of staff to the chancellor at Rutgers-Newark, said Collado contributed to almost everything involved with the HLLC project, including the academic components; engagement among students, faculty and staff; and even the conceptualization of the building that the community will eventually grow into.

Englot said there are currently around 90 students in this community and that this number is expected to grow to around 400 students by 2018 when the new building to house the community is completed.

“The trajectory has been set, and that is really largely owing to Shirley’s incredible vision of what could and should happen, and how best to identify and cultivate talent,” Englot said.

“As an alumna of the program, she represents the core values, the mission of Posse,” Bial said. “She is deeply dedicated to equity in education. She cares about diversity in a way that’s not superficial. She’s a role model for students. … So to have her in a leadership position at The Posse Foundation was a powerful message to young people following in her footsteps.”

Inclusive access to higher education is a concept that Collado told campus community members she is particularly passionate about. She also described her leadership style in a way that reflects this focus and said shared governance had been a focal point of her previous work.

“I believe in being authentic, being a visionary, being courageous, being real,” she said. “My leadership style is action-oriented; it’s inclusive. One of the things that I put a lot of energy into is mobilizing a lot of communities that don’t normally work together.”

She said she sees the college’s long–term issues with diversity and inclusion as both challenges and opportunities to push the college forward.

“My hope is that with my leadership and your drive and your help and your trust, we’re going to be pushing the boundaries and setting the national model on what a campus should look like — and not just look like physically, but representatively, and what happens on the ground so that we all have a stake in this place,” she said, speaking to a group of journalists from the Ithaca community shortly after the announcement.

Collado introduced herself to the campus community in a more personal fashion through two open sessions, held at 11 a.m. and at noon Feb. 22 in the Emerson Suites. Collado spoke about her experience and background in higher education and also about how her life story has developed her leadership abilities.

Her parents both worked demanding jobs — her father was a full-time taxi driver for 30 years, and her mother worked in a clothing factory — placing her, as the eldest child, in a caretaker role in her family, on top of going to school, working at a pharmacy and being a translator for her parents.

“I was a parentified child,” Collado said.

Some students said a woman of color and a first-generation college student is exactly the kind of person they would like for a college president.

“She comes from a background that speaks to so many of us who don’t have a voice at the college,” sophomore Dominique de Lisle said.

She said that because the college is a “PWI” — a predominantly white institution — having a president of color will help represent students who can identify with her.

When senior Carla Tilghman spoke with Collado, she said that she could not help but give her a hug because she was so excited to see a woman of color in the top leadership position at the college.

“I never would have thought that would happen here,” Tilghman said.

Before Rutgers, Collado served as vice president for student affairs and dean of the college at Middlebury College in Vermont, where she led the development of its Center for the Comparative Study of Race and Ethnicity, as well as the revisions of sexual misconduct policies and a new student orientation program. Under Collado’s direction, Middlebury and Rutgers-Newark collaborated with Smith College and the University of California, Fullerton to launch the BOLD Women’s Leadership Network, an initiative supporting the development of women’s leadership skills, in July 2016.

While at Middlebury College, Collado also led and developed the Creating Connections Consortium — a cross-institutional initiative geared toward increasing faculty diversity within higher education. Susan Baldridge, provost at Middlebury College and principal investigator for C3, said Collado’s work on educating the Middlebury community on issues surrounding diversity and inclusivity was much needed.

Though Collado accepted the role as president at the college, she said in one of the open sessions that she had not been actively looking to leave her current position. She became interested when colleagues of hers started nominating her for the position because they felt she had certain strengths in diversity and shared governance — issues the college has struggled with under Rochon’s tenure.

“They told me, ‘There is some interesting stuff happening at Ithaca College. You should take a look at this,’” she said.

Junior Marieme Foote, president of Ithaca College’s Student Governance Council, said the executive board had met with Collado before the semester started. She also said that the board felt Collado was the perfect fit for the college. Foote said there is currently a gap between students and the administration and that she hopes Collado will build the bridge between the two.

Ellie Reinhardt, editor in chief of The Middlebury Campus — Middlebury College’s student newspaper — said Collado left an impact on both an institutional and student level during her eight years there, especially through her development of the Anderson Freeman Resource Center, an intercultural student space in Carr Hall at Middlebury.

“The general sentiment of students is that she was very welcome to conversations, welcome to discussions and welcome to working with students,” she said. “She created spaces and allowed students to openly engage in really important, and often difficult, conversations.”

“I think people were almost prepared to be disappointed, but now, they’re ecstatic,” Gayeski said.

Collado contextualized her appointment to the college in the present state of higher education and the country — one of change and transition.

“I believe that the college and I — to let you know what I’m really thinking — are really at a pivotal moment together, not only for the history of this college, but in the history of this nation and the history of higher education,” Collado said. “I want you to know this morning that I take that responsibility very seriously, and I can’t wait to officially join this community in July.”

It is further imperative for committee members and the board of trustees to listen to the critiques put forth by former constituents of the candidates.

The Ithaca College Board of Trustees announced Monday the selection of seven trustees, three faculty members, one senior level administrator, one staff member and one student to serve on the presidential search committee. The committee will be chaired by C. William Schwab ’68, chair of the board of trustees. “It’s a very exciting time for…