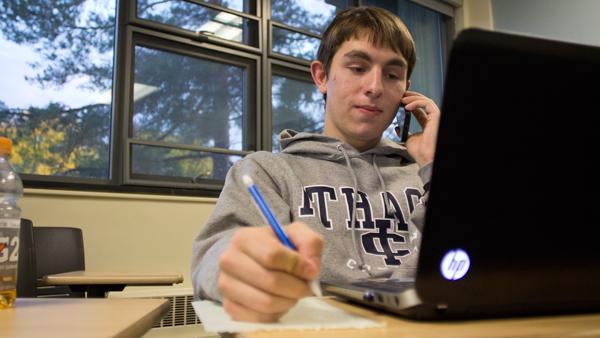 As Election Day approaches, student organizations like Ithaca College Democrats and Ithaca College Republicans are working to reach out to students to make sure they cast their ballots.

In less than a month, many college voters will be eligible to vote in a presidential election for the first time. Though partisan groups on campus are pushing students to vote through public debate parties during the scheduled political debates and awareness events, many students may fail to cast a ballot because of changing voter identification laws and a lack of information about how to vote.

Senior Robert Oliver, president of IC Republicans, said the group is focused on informing students about the economy and healthcare. He said it’s important for students to understand who they are voting for and how that candidate will help recent college graduates enter the workforce.

Analysis of the of U.S. Census Bureau’s 2011 Current Population Survey by researchers from Northeastern University, Drexel University and the Economic Policy Institute found that 53 percent of recent college graduates are unemployed or underemployed. Oliver said the numbers should be a motivating factor for students to vote.

“Our future is at risk right now,” he said. “If we stay in the current situation, we’re in with about 50 percent of college kids unemployed coming out of college. We’re not going to have any jobs.”

Senior Rob Flaherty, president of IC Democrats, said the group’s primary objective before the election is to help President Obama win a second term and encourage students to vote.

IC Democrats will sponsor a Voter ID Cupcake Give-Away on Thursday, and they will give out cupcakes in Campus Center to students who have a valid New York state drivers license or can produce a bill that proves their place of residency. The event is meant to mirror strict voter requirements.

“It’s important to really know the rules, because they’re sometimes made to be deliberately obtuse and complicated so students, minorities and seniors can’t vote, Flaherty said. “It’s important to know how to exercise your right to vote.”

Since the last national election in 2010, more than a dozen states have changed their laws governing voter registration deadlines and what students will need to vote.

Recently, the Pennsylvania Supreme Court overturned legislation that would require voters to have specific photo identification to be allowed to cast a ballot, because voters would not have enough time to apply for the documents before they must register to vote.

Sara Massey, media director for Project Vote, a nonpartisan, nonprofit organization that works to educate and mobilize under-represented voting populations, said the student community does not realize its full potential in political elections and is hindered by strict voter registration laws.

“Students move a lot and don’t have a permanent address,” she said. “When you move, do you go to the DMV every time to get a new ID? No, why would you? The real way to fight restrictive laws is to participate — by showing up.”

Massey said students who attend college outside of their home states tend to be more confused about how they should vote, because they have the choice of registering either at home or in their college town. She said students should vote in the community they feel most connected to.

Felicia Sullivan, a senior researcher for the Center for Information and Research on Civic Learning and Engagement, said students are more likely to cast a ballot if fellow students or organizations encourage them to vote.

“The conventional wisdom will say that young people are politically apathetic, they don’t care and they’re not interested in issues,” she said. “But that’s really not true. It’s often they lack the fundamental information that helps them make decisions.”

The 2008 presidential election between Barack Obama and John McCain saw an increase in voting by those eligible and aged 18 to 29 to 51 percent from 48 percent in 2004, according to the Center for Information and Research on Civic Learning and Engagement.