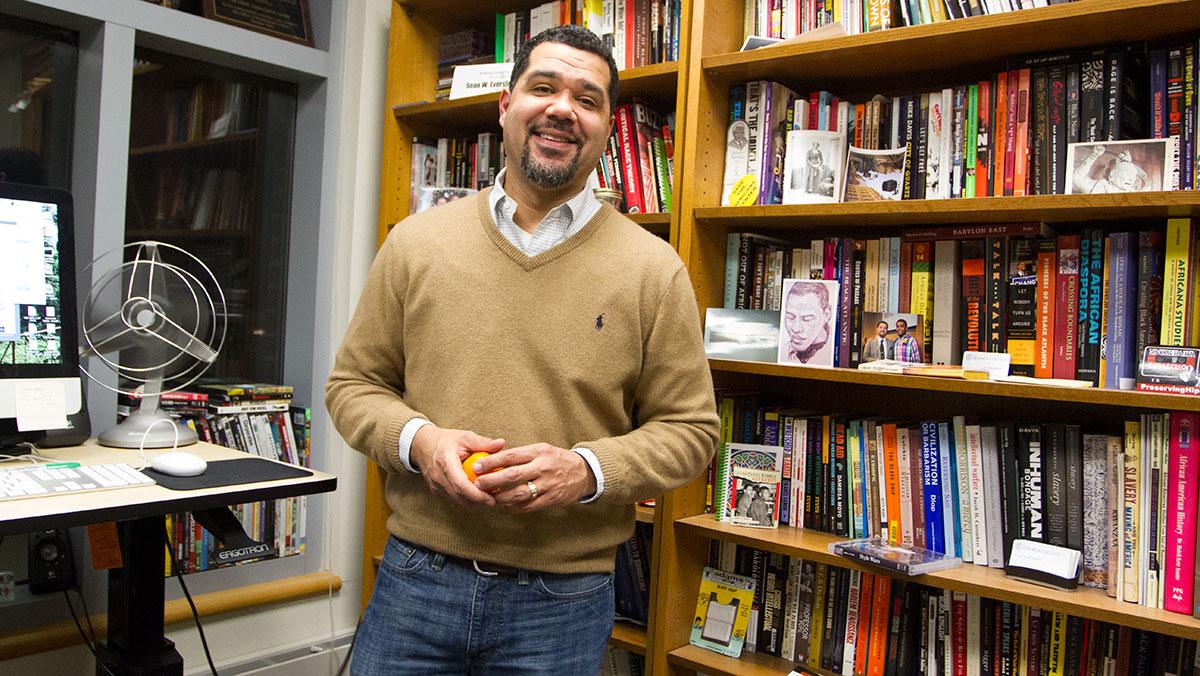 Amanda Den Hartog/ The Ithacan
Sean Eversley Bradwell, assistant professor in the Center for the Study of Culture, Race and Ethnicity, is the narrator of Civil Warriors, a documentary about black soldiers in the Civil War.
By Kayla Dwyer — News Editor
Published: February 4, 2015

An Ithaca College professor, with the help of some students, is adding a contemporary voice to a local documentary capturing experiences of free black men in the North during the Civil War.

Ithaca-based Photosynthesis Productions has enlisted the help of Sean Eversley Bradwell, assistant professor in the Center for the Study of Culture, Race and Ethnicity, to document and tell the stories and motivations of 26 African-American men from Tompkins County who enlisted in the Civil War. The documentary, called Civil Warriors, will have its premiere in the Cornell Africana Studies and Research Center this spring.

“They’re living in freedom and now decide that they want to join the Civil War and fight for their family and friends to be free in the South,” Bradwell said.

The documentary follows two families in particular, consisting of two fathers and sons who enlisted together on Christmas Eve 1863 in the St. James AME Zion Church in Ithaca, which to this day contains a memorial for the 26 men who enlisted.

Bradwell plays the role of narrator and host in the documentary, the script of which he said is based on a spoken-word poem by Ben Porter Lewis, a local slam poet.

Deborah Hoard, president of Photosynthesis Productions, said she has been pursuing this documentary since 2006, when they got the first footage of spoken-word performers at Cornell University. Bradwell said he joined the effort about a year and a half ago when he saw an early copy of the documentary, which at that point consisted of these spoken-word performances. What it was missing, he said, was context and a contemporary connection.

The contemporary connection is two-fold: locating the story in Ithaca and deciphering what the story means in 2015, he said.

Bradwell said he adds context through the research he has been conducting on Ithaca’s black history for the past five to six years, so for this project, he has channeled his research to focus on U.S. color troops and black soldiers’ journey from enlisting to fighting.

He was not alone in the search. Sophomore Joshua Dufour, an MLK Scholar, spent this past summer searching through archival records for black representation in the Ithaca community during the Civil War. In places like the Ithaca archive history center, the black archives at Cornell University and the Tompkins County Public Library, Dufour pored through photographs, newspaper clippings and records to find evidence of African-Americans in Ithaca who joined the war effort.

“What really interested me about the documentary was that it tied in social justice and black history from an Ithaca standpoint, so I felt like I was getting multiple aspects of me because I’m a student at Ithaca, I’m black, I’m an MLK Scholar and I’m a film student, so I feel like it all tied in really nicely to get a little piece of myself,” he said.

However, he said he found that the search was a slow, arduous process.

“It was really hard to find anything in writing about black people in Ithaca except for documentation of black people arriving in Ithaca,” he said. “Researching anything about black history in the U.S. can be very difficult because of the systematic forms of oppression that masks that history.”

He said he was surprised to find out about the number of black people in the North at that time, prior to the Emancipation Proclamation.

Bradwell said this is the under-told story he hopes students will take away from the documentary.

“I think that students are always shocked to learn that black folks who are free in the North believe in freedom so much that they are willing to fight for it anywhere,” he said.

Junior Lia Munoz, also an MLK Scholar, researched U.S. Census Data over the summer for black males of the eligible age range in and around Ithaca who might have fought in the Civil War. She said her list was then narrowed down to focus on the 26 Tompkins County men.

Hoard said the film will be completed in time for the 150th anniversary of the Christmas Eve in 1865, when these men were fighting in the South.

“It’s the right time,” she said. “If I’m not imagining it, it seems like there is a renewed interest in civil rights and justice … so it seems like it really had to be done now.”

Bradwell said Ithaca’s history has many accounts of political activism, but the themes are still relevant in the present.

“This is a story that’s timeless — the kind of story that families choose where they decide if they’re gonna send their children to warfare,” he said. “Families have been reconciling with that for centuries.”

Munoz said just as she was about to begin her research, her 17-year-old brother made the decision to enlist in the military upon turning 18 this July.

“It definitely was a push for me to do it,” she said. “You wonder what these men were going through, what compels you to go and fight the war that you’re not guaranteed your freedom or even respect after the fact.”

In addition to the film, Photosynthesis Productions is working on a curriculum addendum to release into high schools around the nation, focusing on an alternative story to the Civil War. Hoard said the film guide will include lesson plans, resources telling students how to conduct research in their hometowns and scenes of spoken-word performances for discussion.

In the next month, Bradwell said the team will be in postproduction and will spend a day at the National Museum of Colored Troops to get some more footage, in addition to the footage they have of the Ithaca City Cemetery, Dewitt Park Civil War monument and the St. James AME Zion Church. Hoard said they also need to refine the sound track and trim the film before showing it, for which an exact date has not yet been selected.

She said the goal is to show the film at both Cornell and Ithaca College by early May.

For Munoz, the most impactful take-away from participating in the project is how easy it can be to get lost in historical record.

“Someone’s whole life is limited to this small document, and then you have to put the pieces together,” she said. “It encourages me to keep better track of my own family. We’re not all going to be here in 100 years, and someone might need this.”