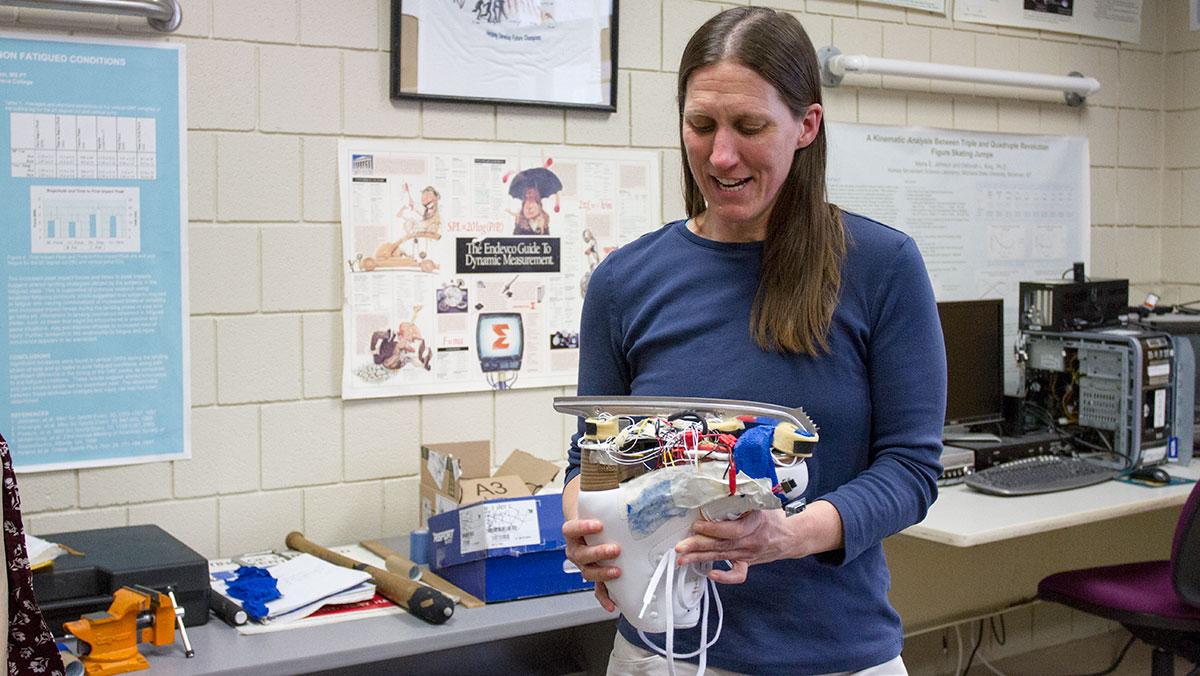 Anushka Rajbhandari/ The Ithacan
For the past 3 1/2 years, Deborah King has been researching figure skating injuries and the impact of forces on the body created by jumps and moves.
By Angela Weldon — Staff Writer
Published: March 17, 2015

When landing a triple axel, ice-skaters experience a force equaling up to eight times their body weight as they hit the ice, according to researchers at Brigham Young University. With this  extreme repeated force, injuries to skaters’ ankles, legs, hips and back occur frequently.

Deborah King, associate professor in the Department of Exercise and Sport Sciences at Ithaca College, specializes in biomechanics of human movement and sports performance and has been working to understand why figure skating injuries are so common.

For the past 3 1/2 years, King has been researching figure skating injuries and the impact of forces on the body created by jumps and moves. King’s research has led her to create a special skate blade with instrumentation fitting entirely under the boot, which measures force on skaters when landing skating moves. With this “smart blade,” King said she intends to look at how force contributes to injuries in figure skating.

King said researchers have been working for years to understand the relationship between impact on the body and figure skating injuries.

“We, being scientists in figure skating, thought that there was going to be, more than likely, a relationship between all the impacts on the body through all of the practice they do with jumping and injury rates, particular in what are called overuse or chronic injuries,” King said. “These are things that are just wear and tear over time, and there’s not one single experience that causes the injury.”

For this project, King partnered with Sarah Ridge, an assistant professor of exercise science at BYU. Ridge and several mechanical engineering students built the blade, which is shared between the two campuses for testing.

At Ithaca College, King has been working in the biomechanics lab with graduate student Jaclyn Saksa, a member of the figure skating club. They have been testing the blade since it arrived Feb. 16.

During testing, Saksa wears the skate with King’s blade and jumps off of a box about a foot high onto a portion of synthetic ice with a force plate underneath, which measures the force of impact. This test simulates skating jumps and allows King and the researchers to confirm the accuracy of the blade’s ability to measure force.

“Next we are going to be able to go out on the ice with it and do real jumps and collect data out on the ice, which is really exciting,” Saksa said.

King said these sorts of injuries happen in running and other sports all the time but are much harder to measure in figure skating.

“It’s been reasonably hard to get good data on the impact of biomechanics on figure skating,” King said. “With other sports like running, we have a ton of data on impact loading and how footwear, surface, and biomechanics affect the impact loading. In skating, there’s just not a lot of data, and I think a lot of it is just technology driven.”

Researching skating injuries is challenging, King said, because the sport occurs over a large area of space instead of a defined testable space, the instrumentation may get cold or wet, and it is difficult to manufacture data-collecting equipment that will not hinder the athlete’s skating abilities.

“Before things had become smaller, faster and lighter in terms of technology and computer processing, it was really hard to do,” King said. “So it finally hit the point a couple years ago where we thought we could design instrumentation that fits entirely under the boot to measure forces, so we won’t interfere with the skaters’ natural skills.”

Although it has been difficult to gather information on these overuse injuries, King said they do happen often in figure skating.

“There’s a fairly high incidence,” King said. “Something like 70 percent of competitive skaters report overuse injuries. That’s really high, so we’d like to try to minimize that, and certainly one way of helping is understanding what’s contributing to the injuries. That’s why we want to know what the impacts are on the body.”

Saksa said the device is still in its early stages of testing and has only been tested on real ice briefly. She said she believes it will be able to hit the ice in the near future to gather data for more advanced jumps and moves, to determine risk factors and to prevent common skating injuries such as foot, ankle, knee, hip, lower back and stress injuries.

Once King’s research is complete and released to the public, King said she hopes it will be useful to the figure skating community.

“We don’t necessarily know if we’ll find a relationship between impact forces and injuries, but we hope the information will actually be out there and be used so it doesn’t just stay in the scientific community,” King said.

King said this research can be used in several capacities of figure skating. She said she would like to see this research used by boot manufacturers to make safer boots and by coaches to structure skating practices and improve landing technique.

Saksa said she also feels that King’s work will be important to the future of figure skating.

Ithaca on Feb. 17 and shot footage of Saksa and a few other skaters from the club performing different jumps while King explained the biomechanics behind them. The crew also filmed King and Saksa testing in the lab. The episode aired in Canada on March 3 and is currently available online at http://www.discovery.ca/dailyplanet.

King said she is excited to share her work with the public through Discovery Channel Canada.

“It’s always exciting to see other people interested in your work and then for that work to be able to be seen by people all over the world,” King said.

Freshman skater Samantha Brown, who was filmed skating with the new blade for the Discovery Channel Canada program, said she respects King and her research.

“She’s so passionate about what she does, and she really cares about the athletes,” Brown said. “As an athletic training major, I identify with her a lot in that aspect, and it’s really nice to see the science side of prevention and care of athletic injuries.”