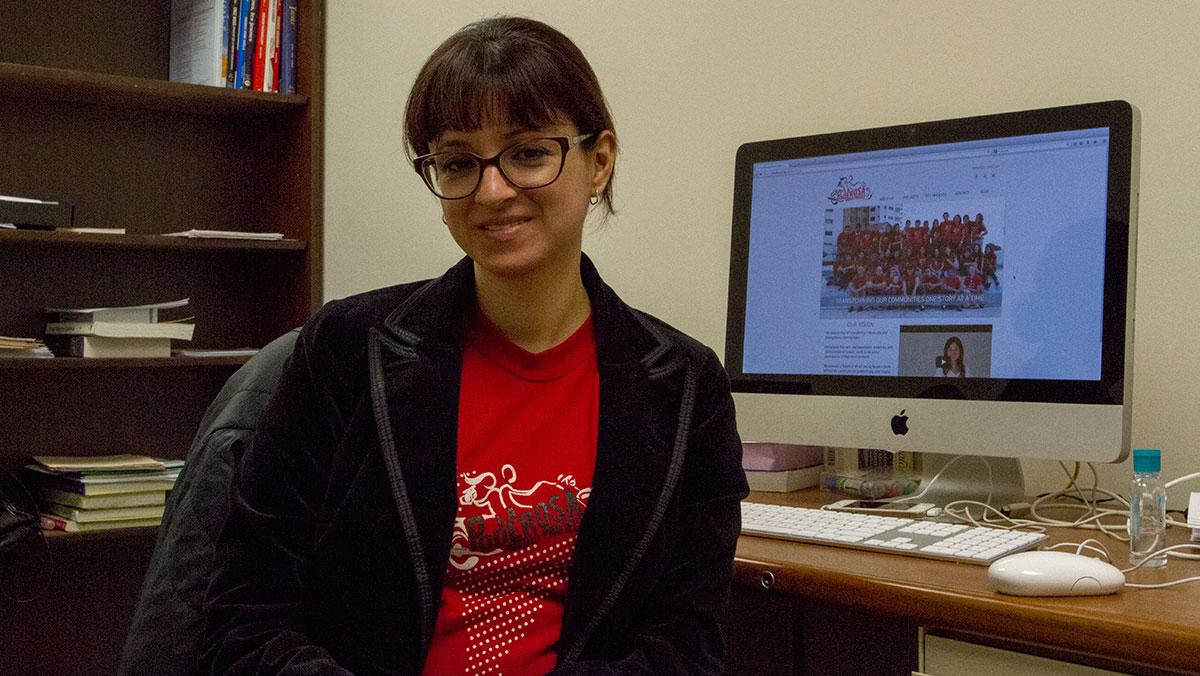 Clara O'Connor/ The Ithacan
Alejandra Zambrano, a lecturer in the Department of Modern Languages and Literatures at the college, is the founder and executive director of La Poderosa Media Project.
By Evan Popp — Staff Writer
Published: February 25, 2015

“La Poderosa” translates to powerful in English, but for a number of Ithaca College Spanish professors, the phrase has an additional meaning.

Alejandra Zambrano, a lecturer in the Department of Modern Languages and Literatures at the college, is the founder and executive director of La Poderosa Media Project. Zambrano said the program facilitates community-based filmmaking projects involving both Spanish- and English-speaking students working in collaboration to produce short films. She said La Poderosa mainly operates in Ecuador, but has also done workshops in Chile, the Dominican Republic, Panama, Argentina and the United States.

Every summer since 2009, La Poderosa has hosted a six-week session in Bahia de Caraquez, Ecuador, and added a four-week winter program in Chile in January 2013. Zambrano said each summer session usually culminates in two or three completed short films, which both the English- and Spanish-speaking students work on in the afternoons. The English-speaking students receive immersive Spanish instruction in the mornings.

The program is open for students ages 15–22, including college-age students from the United States and Canada as well as Latin America, but no prior filmmaking experience is necessary, Zambrano said.

La Poderosa is currently accepting applications for this summer’s program in Ecuador, which runs from May 26 to July 4. Students have until March 15 to apply to receive up to six-credit hours through Stony Brook University. However, the priority deadline for those not applying to receive credit hours is March 1. The application form can be found at http://www.lapoderosa.org/#!application/cjdx.

Senior Amanda Hutchinson and sophomore Vanessa O’Connor participated in a two-week La Poderosa program in Ecuador last summer. O’Connor said she and Hutchinson did a version of the program where they worked with other students to create ethnographic documentaries about food in the community of Bahia de Caraquez.

O’Connor said one of the purposes of the food documentaries was to preserve food traditions in a rapidly changing and more technologically advanced world.

“The idea is to use technology to our advantage to preserve these traditions so that future generations of kids growing up in Bahia will know how to prepare and cook and understand the cultural dimensions of this food,” she said.

O’Connor said for the documentary, her group featured a woman who made a kind of sausage called Morcilla. She said her group’s film was more of a documentary than some of the other projects because the woman they followed sold her products in a market and didn’t have time to explain how she made the sausages.

“But in a way, that’s kind of what we were going for because that is the lifestyle of this woman … It’s how she makes a living,” O’Connor said.

Zambrano said the original idea for La Poderosa came when she was in graduate school at the University of Texas at Austin. She began a pilot program in 2004 and in 2005 received a startup grant from Wellesley College, where she went for her undergraduate degree. In 2009, she said, the program added American and Canadian students to the fold.

“Since I was in grad school for literature and I liked all these ideas of storytelling and creating ways of expressing your ideas, I started developing a curriculum so that I could teach underserved high school students how to create stories,” Zambrano said.

Jorge Garcia Nunez, the curriculum director of La Poderosa and an assistant professor in the Department of Modern Languages and Literatures at the college, said La Poderosa has a very specific methodology it uses to instruct students on how to make films and learn Spanish: complete Spanish immersion for non-native speakers and producing engaging lesson material.

“How can we create a curriculum that is not only theoretical but also practical in order to get young people in Latin America to finish a movie?” he asked. “I’m always trying to make the contents of the books and the manuals interesting.”

Zambrano said the organization teaches students all aspects of filmmaking, including writing skills, acting, directing and the technical aspects. However, she said La Poderosa places a special emphasis on writing, which the organizers view as an educational void in both American and Latin American schools.

Zambrano said the name La Poderosa was chosen because a large component of the organization’s mission is to empower youth through filmmaking and storytelling. However, she said the name also is a reference to Argentine Marxist revolutionary Che Guevara, who traveled around Latin America on his motorcycle called “La Poderosa.”

The organization’s logo is a motorcycle, which Zambrano said represents the idea of adventure, traveling to new places and experiencing different cultures.

In addition to the programs in Latin America, last year La Poderosa also produced a film in Ithaca directed by a La Poderosa student from Chile and in collaboration with Cornell University. Enrique Gonzalez-Conty, an assistant professor in the Department of Modern Languages and Literatures at Ithaca College and a Spanish instructor for La Poderosa two summers ago, said the film is called “La Larga Espera,” or, “The Long Wait.”

Zambrano said La Poderosa has made more than 30 films and short documentaries in total, some of which have gone on to win several awards in local youth film competitions in Ecuador.

She said the films La Poderosa makes are generally fiction, with students creating the plots, settings and characters as well as producing and directing the film. She said the reason she chose filmmaking as the organization’s medium of artistic expression is its inclusive nature.

“If you are shy, or if you are an extrovert … or musical type or you like to act, there’s always room for everyone in a film project,” Zambrano said. “And I think that’s one of the magical things.”