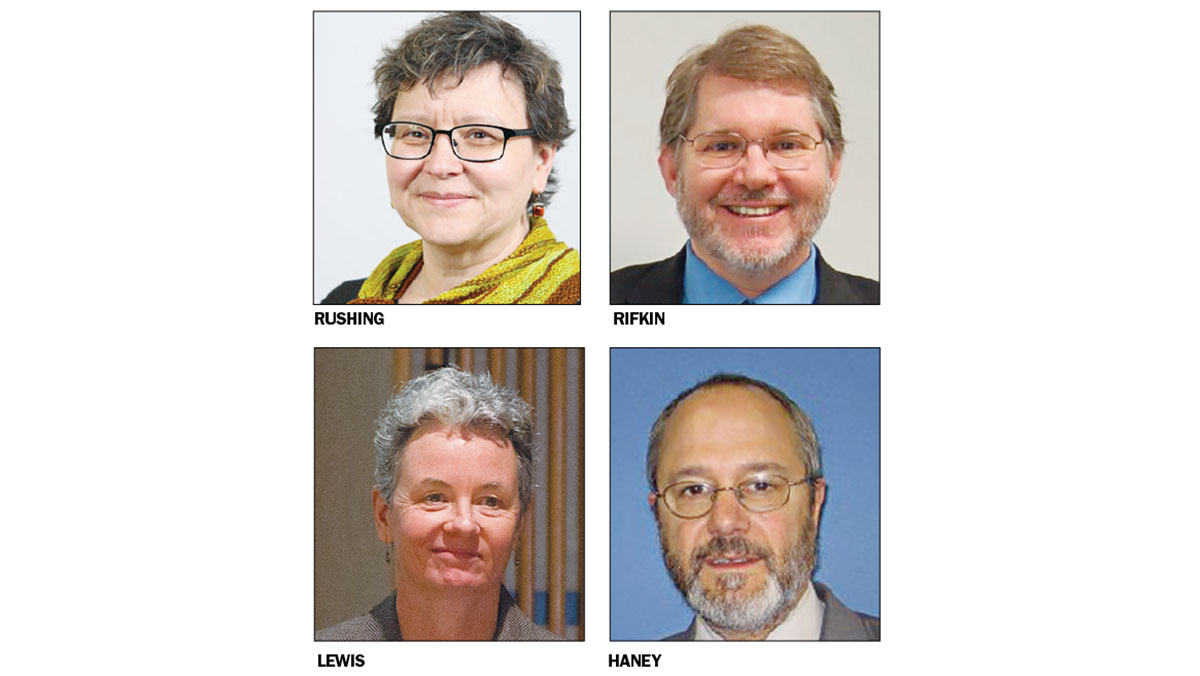 Ithaca College is taking a step forward in hiring a new permanent provost and vice president for educational affairs, as three candidates for the position visited the campus over the last two weeks — with the fourth arriving Dec. 11 — to present what their plans for the college would be.

The four candidates are the finalists to replace Marisa Kelly, former provost and vice president for educational affairs, who left the college May 31 to serve as senior vice president for academic affairs and provost at Suffolk University. Since Kelly’s departure, Linda Petrosino, dean of the School of Health Sciences and Human Performance, has served as interim provost while the college searched for a permanent replacement.

The first candidate to visit campus was Beth Rushing, vice president for academic affairs, dean of faculty and professor of sociology at St. Mary’s College of Maryland. Rushing arrived at the college Dec. 2 and at a meeting open to faculty, staff and students in Textor 102, discussed her vision for the college.

In the meeting, Rushing emphasized her commitment to continuing the structural change already underway at the college, citing the continued implementation of the Integrative Core Curriculum as one action she believes will increase the quality of education.

Last December, Rushing met with St. Mary’s students to address budget cuts to academic programs, according to an article from The Point News, St. Mary’s student newspaper. The article reported students left the meeting feeling their voices had been heard and satisfied with the way the session had gone.

Benjamin Rifkin, dean of the school of humanities and social sciences and professor of Russian at The College of New Jersey, arrived at campus Dec. 4 and held a meeting with the college community in Emerson Suites. During Rifkin’s presentation, over 300 students participated in a “die-in” at three locations around campus, including outside of Emerson Suites, to protest problems of structural violence and racial injustice. Rifkin said he was aware of the demonstration and commended students for making their voices heard.

He went on to say one of his top priorities as provost would be to continue the integration of academic and student affairs.

Rifkin also mentioned the value of what he called significant learning opportunities, citing internships, undergraduate research and, in particular, study abroad as examples.

Jon Stauff, director of study abroad at The College of New Jersey, praised Rifkin, saying he has spent a significant amount of energy creating community at TCNJ.

“He established a number of school-wide committees, including a student advisory board and a similar group for alumni, to bring ideas and initiatives from a variety of stakeholders together and facilitate dialogues,” Stauff said.

The only in-house candidate of the four finalists for provost, Leslie Lewis, dean of the School of Humanities and Sciences at the college, presented her vision of the college’s future Dec. 9.

At a meeting in Emerson Suites, Lewis discussed the importance of holistic learning, which she defined as exploring all parts of students’ educational experience.

Another part of Lewis’ message was communication between different parts of the college, which she believes can be improved.

“I do think that there is a way that we continue to struggle because we are just big enough that it’s hard for us to work in tandem with one another,” Lewis said.

Laurie Arliss, chair of the communication studies department at the college, praised Lewis, saying she is willing to collaborate with people to solve problems.

“Her approach has been to identify areas of concern or pride, then engage as many others as possible,” Arliss said. “In H&S, she has communicated effectively with chairs, committees, faculty, staff, students and alumni.”

The fourth and final candidate to visit campus, David Haney, vice president for academic affairs at Emory & Henry College, is slated to arrive at the college Dec. 11.

While at Emory & Henry, Haney helped initiate the development of a school of health sciences and spent much of his energy expanding its graduate programs.

“I think he truly values the opinions of the faculty and staff alike and is extremely approachable,” Cobler said. “He seems to understand the importance of his position in voicing the concerns of the faculty to those higher up the proverbial totem pole.”

Dylan Johnson, Student Government Association president at Emory & Henry, said Haney is a familiar face on campus to both students and faculty.

“From the student perspective, I see him as actively engaged and involved,” Johnson said. “From the administrative perspective, he is well organized, pays attention to detail and is very open to criticism.”

Johnson added that over the past three to four years, Haney has been involved in the hiring of faculty at the college from many diverse backgrounds.

Luke Keller, professor and chair of physics and astronomy and co-chair of the Provost Search Committee, said the final decision on which candidate to offer the provost position to will be made by President Tom Rochon. However, he said the search committee will be giving the president their recommendation on which candidate stood out to them during finals week.

Keller said he believes the president will be able to make a quick decision on which candidate to offer the position to. He said the goal is to offer the job to one of the candidates before winter break.