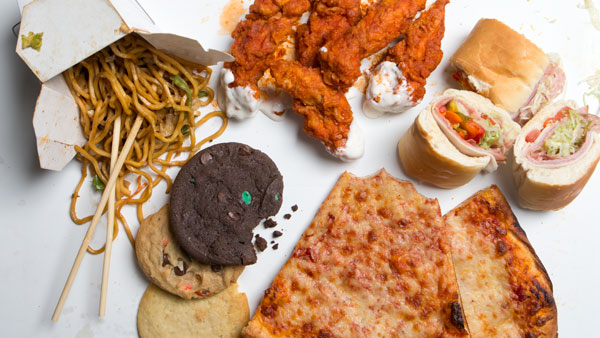 GrubHub, the No. 1 online ordering service in the U.S., conducted this study. Allie Mack, a public relations associate at GrubHub, reported that the college’s students are 29 percent more likely to order between the hours of 10 p.m. and 2 a.m. than Cornell University students. Your Online Restaurant, a local online ordering service also known as 247YOR, reported similar results.

As this data suggests, online ordering has a large presence in Ithaca. Services that offer online ordering, which also include Ithaca To Go, attract two types of patrons: There are customers, the restaurants that sign on with them, and consumers, the individual people who order the food.

Mike Evans and Matt Maloney founded GrubHub, which now functions across more than 500 cities, in 2004. GrubHub arrived in Ithaca after it bought out Campusfood in 2011. Ithaca To Go, founded in 2011, doubles as online ordering and a delivery service to the 14850 zip code, which helps restaurants that can’t provide their own delivery. Insomnia Cookies, a food company which offers online ordering and late-night delivery, launched in 2003 with Seth Berkowitz, a college student who began delivering fresh-baked cookies to his peers late at night. Today there are more than 30 Insomnia Cookies stores. 247YOR has been functioning for two months in Ithaca with the intention of providing a more affordable online option.

Junior Marissa Fortman recently used online ordering services for the first time. She ordered Purity Ice Cream from Ithaca To Go and Chinese food from GrubHub for the same meal. She said GrubHub had more Chinese options than Ithaca To Go.

Some businesses do not share Bucior and Archino’s praise for the nationally acclaimed corporation. On its website, Sammy’s Pizzeria specifically discourages customers from using services like GrubHub, urging them instead to use 247YOR. The pizzeria also puts cardstock with the same advertisement in take-out orders. Jasmine Tourance, a manager at Sammy’s Pizzeria, said GrubHub’s prices are too high.

“They charge an outrageous commission,” Tourance said. However, Sammy’s hasn’t ended their registration with GrubHub because they now receive about half of their orders from the Internet, and despite the fees, GrubHub continues to drive more business to Sammy’s, Tourance said.

Mack and fellow public relations associate, Abby Hunt, said GrubHub’s commission rate starts at 10 percent, and a restaurant can choose to give GrubHub a higher commission for greater visibility on the website; for example, showing up at the top of searches.

“We do have a great relationship with Sammy’s,” Hunt said. “I think the size of our restaurant network speaks to our popularity with restaurants.”

247YOR recently emerged in Ithaca with the mission of providing a popular online ordering service that places customers before profits. Nazar said restaurants typically make profit from 10 percent of their sales, so charging anything above 10 percent takes money from the establishment. 247YOR only charges a 5 percent commission, and it does not charge credit card–processing fees.

“We want to help the local restaurants to survive the economy and make some money for themselves,” Nazar said.

Amy Zarbock, co-owner of Ithaca To Go, declined to comment on her company’s charging rates to customers and consumers.

Alexis Randall ’09, owner of Waffle Frolic, said having a delivery service provides the equivalent to an eighth day in the business week. Randall said she only uses Ithaca To Go’s services to support her business.

Zarbock said she feels that the company’s local presence allows strong relationships to develop between Ithaca To Go and restaurants. Bruce Lane, co-owner of Purity Ice Cream, said Ithaca To Go’s local status is important to him.

“I’m pretty loyal to Ithaca To Go,” Lane said. “I like to support local business.”

An increased reliance on technology is one reason why students — along with the general population — are beginning to rely more on online ordering.

Archino also cited the ease of technology as a reason for increased use.

“It’s like text messaging: Why make the call when you can just text it?” she said.

“With the accessibility of iPhones and other smartphones, it’s a lot easier than calling a call center and talking to somebody,” Sarnecky said. “This generation is more adapted to do everything on a handheld device electronically.”

“Our web developer created the application [because] there was just sheer demand for the application to be on the phone, because so many people are just hanging out on their phone, and it makes everything easier,” Zarbock said.

She said that while a majority of orders are placed online, about 25 percent of Ithaca To Go’s orders are still placed with phone calls.

“If you’re indecisive about what you want, like let’s say you’re calling to order a calzone and you want special things in it, it’s harder to relay that information over the phone.”

Fortman said because of the convenience of online ordering, her first time using the services probably wouldn’t be her last time.