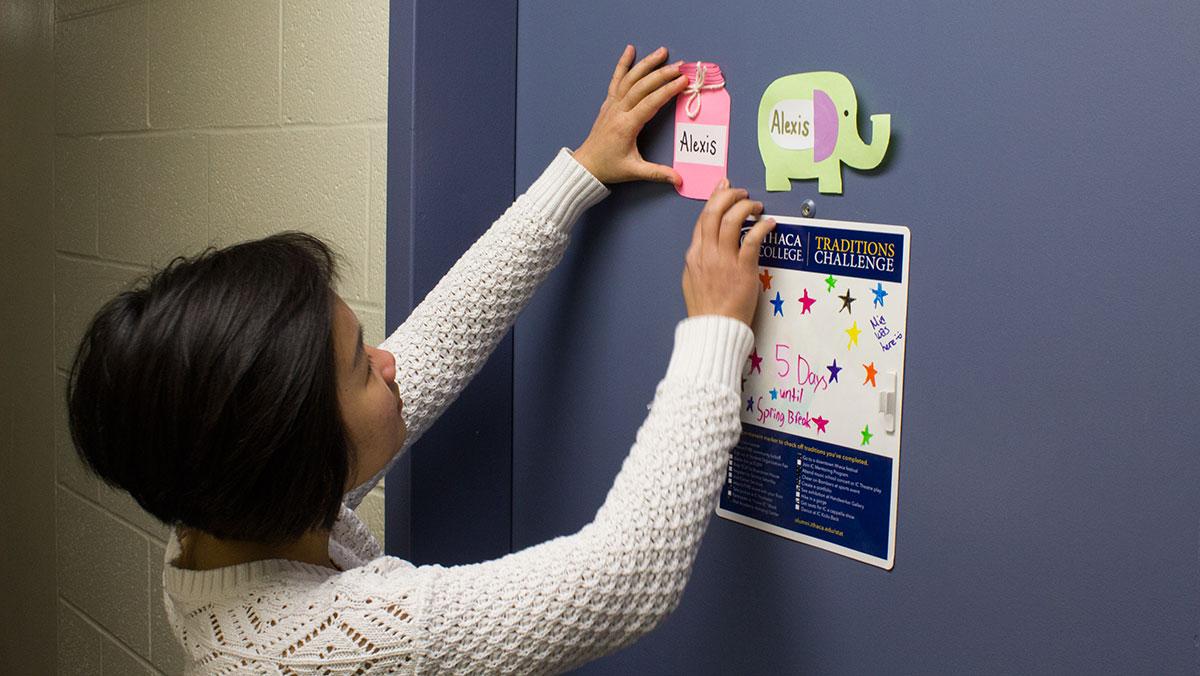 Alexis Liberatore/The Ithacan
Sophomore “Cathy” Thi Kim Ngan Tran, RA of the 10th floor of West Tower, hangs a nametag on the door. RAs at the college said they are unhappy with the compensation provided.
By Danielle Lee — Contributing Writer
Published: March 30, 2016

Ithaca College resident assistants are not satisfied with the compensation they receive based on their job duties and workload. RAs at the college receive less compensation than RAs who work at other similar-sized private institutions.

Ronald Trunzo, associate director of the Office of Residential Life at Ithaca College, said RAs receive a credit that goes to their student account each semester that they are employed, covering room and part of their board, depending on which meal plan they have.

According to the college’s website, undergraduates pay a total of $15,947 for room and board. New RAs receive $11,870 starting pay their first academic year, increasing each year they serve as an RA.

RAs are responsible for planning five floor events, which can take one to three hours to plan depending on size, and five meetings with associates and co-RAs; room duty from 9 p.m. to 7 or 8 a.m.; attending staff meetings every Thursday; conducting rounds during certain times in the night; responding to and managing crises and emergencies in residential areas; serving as an initial source of support for students experiencing personal or academic concerns by conducting one-on-one meetings; completing all programming requirements; maintaining a positive attitude; being supportive of the department and staff team; and completing other duties as assigned, according to the college’s website.

Trunzo said RAs are paid differently than an hourly job based on the number of hours worked.

“Being an RA is a different type of job because they are on duty for many hours. Therefore, they are paid in stipends and credits,” Trunzo said.

However, some RAs said they believe they should be compensated more.

Sophomore Molly Robbins is currently completing her second semester as an RA.

Robbins said RAs are forced to live in a single room, which cost $9,125 per academic year. She said there is no profit because RAs are using what they earn to pay for the remaining cost of room and board.

“I think, optimally, they should have us pay the price for a double room since we don’t have a choice in living in the single room,” Robbins said. “Not having us pay for that room would be even better.”

At other private colleges of similar size, room and board are fully covered. Elon University, with 6,483 enrolled, offers RAs a housing waiver and monthly stipend that eventually adds up to the cost of a single room, which is $3,493.50 per semester. In the 2014–15 academic year, Chapman University, with 7,892 enrolled, offered RAs full room and board for the academic year.

The College of William and Mary, with 8,437 enrolled, compensates its RAs with a $3,000 stipend paid semimonthly, covering a majority of room and board and specified room rent in the agreement form.

In January 2013, the Office of Residential Life at John Carroll University, with 3,726 enrolled, announced it would reduce its RAs’ compensation, as well as the number of RA positions, in 2014. According to The Carroll News, many RAs at John Carroll decided to quit because the financial benefits weren’t enough.

Trunzo said that in the past, Ithaca College’s Office of Residential Life has looked at how other colleges compensate their RAs in terms of what they receive.

“I think that we try to be competitive and reasonable in terms of what we are compensating RAs compared to what other institutions are doing,” Trunzo said.

Junior Drew Carr, who was an RA during his sophomore year and left the position after Block I of this semester, said the job was mentally taxing.

Carr said RAs who live on a floor with well-behaved residents don’t have to put in as much work as an RA with a “rambunctious” floor.

“I felt like I was doing a lot more work on the day-to-day trying to manage their relationships with each other, with me, with the floor and with drinking, especially,” Carr said.

Jennifer*, a sophomore RA, said this is her second semester being an RA and that she believes compensation should at least cover room and board.

“A lot of times, I feel like I’m not being supported enough by Res Life directors and faculty members because they expect us to get our RA duties done before our school work,” Jennifer said.

Although the college covers a substantial amount of room and board, Carr said, it can be difficult to fit school work in. Carr believes it should be less about the busy work — like paperwork and bulletin boards — and more about the student interaction.

“The job is a 24–hour position; it is not something that you ever get a break from,” Carr said. “The compensation is never going to be enough because you live where you work. It would only be enough if RAs were paid a salary-type position.”