Ithaca College sends students to Australia for a semester abroad 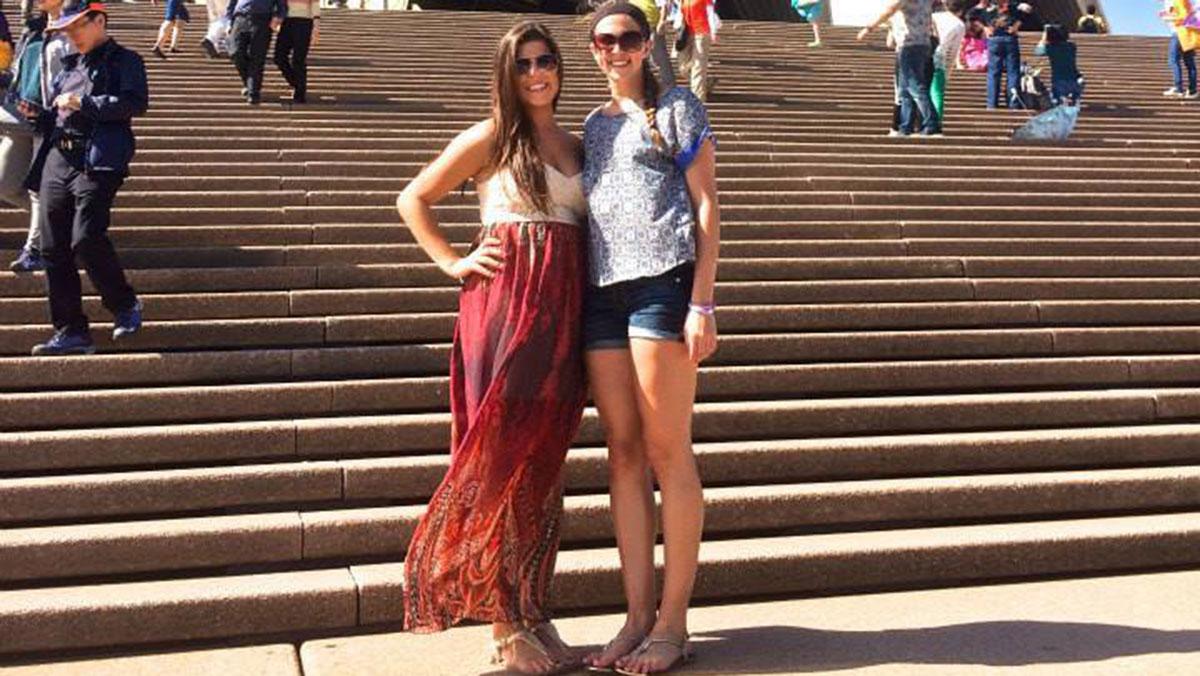 Courtesy of Ashley Chanatry
From right, junior Ashley Chanatry stands with her friend, Elisabeth Marchbanks, in front of the Sydney Opera House during her study-abroad semester in Sydney, Australia.
By Kate Nalepinski — Contributing Writer
Published: December 3, 2014

Watching as the sun sets on a warm Australia day, junior Jon Yoskin surfs atop a blue and orange wave, skidding over the ocean water in New South Wales.

Yoskin attends the University of New South Wales, a short distance away from the beach. He said the closeness and the freedom he experiences in Australia are just two of the factors that allow him to truly enjoy his time abroad.

“I can surf whenever I want to,” Yoskin said. “Just being that close to the water and having it at my disposal has probably been the best experience I’ve had here.”

Yoskin, along with junior Ashley Chanatry and senior John Storer, is part of Ithaca College’s study abroad program, living and studying in Australia since July.

Though they said they’ve enjoyed their time in Australia, the students expressed their distress with daily culture shocks, including distance from family, lack of cellphones, social friendliness and unusual academic grading. Chanatry said the grading system is numeric, though a failing grade is 40 percent or below.

“I have found that classes in Australia are very different than classes in the states,” Chanatry said about her Aboriginal Sydney course, where students study the lives of Sydney inhabitants by exploring the community.

“I’ve noticed that professors are much more critical when grading assignments than they are at home,” Chanatry said. “The grading system is completely different.”

Yoskin said he, too, dealt with the culture shock of the Australian academic system. Before attending the Philip Baxter College within the University of New South Wales, he said, he was unfamiliar with the grading system.

Yoskin also said one drastic difference from the United States is how the university is organized in Australia. Most Australian students attend a university for three years, and each university is divided into colleges based on area of study and preference for a specific residence hall. Each college can have a varying number of students, ranging from 200 to 10,000.

Additionally, Ithaca College students who commuted to a university in Australia had a completely different experience from those who lived in a residential college.

Shortly after arriving in the country, the students busied themselves with Australian activities such as snorkeling in the Great Barrier Reef in Queensland, camping out and surfing on the beaches, and eating local food. The students ate foods like vegemite, a dark paste eaten with crackers; pavlova, a fruity dessert; and meat pies.

Chanatry said how incredible her experience snorkeling in the Great Barrier Reef was, while Storer compared it to his own version of “Finding Nemo.”

Some students also visited other tourist attractions over their spring vacation as part of their study abroad program, including a two-day trip Storer took on the coast of Cairns, a small township in Queensland. In addition to this, he and other students also took a 2-hour drive into the Daintree Rainforest, where they later camped out on the beach.

“I can’t describe to you how liberating it was,” Storer said. “I just slept on the beach and waited for the sun to rise. I felt alone but at the same time, not alone.”

In terms of social differences, Yoskin compared Australia to one giant California and said how easygoing and relaxed the residents are. Storer said he thinks strangers are kind and approachable in Australia.

“I had to adjust,” he said. “I think it made me a more outgoing person because I became more sociable.”

Though the college’s students all have countless reasons for studying abroad, the experience has connected them together in a variety of ways. Storer said traveling unites people together, which allowed him to make new friends. Through this, he has unintentionally gained a love for traveling after studying abroad, he said.

Chanatry, originally from New Hartford, New York, expressed her interest in exploring new places in the future. She said after taking a semester abroad, she won’t feel satisfied with staying in one place for too long.

“I’ve always dreamt of going to Australia, and seeing pictures and hearing stories from peers who have gone abroad definitely sold me,” Chanatry said. “Hearing about the Great Barrier Reef, the beaches and the wonderful city of Sydney was enough to convince me to study abroad, and I don’t regret that decision at all.”