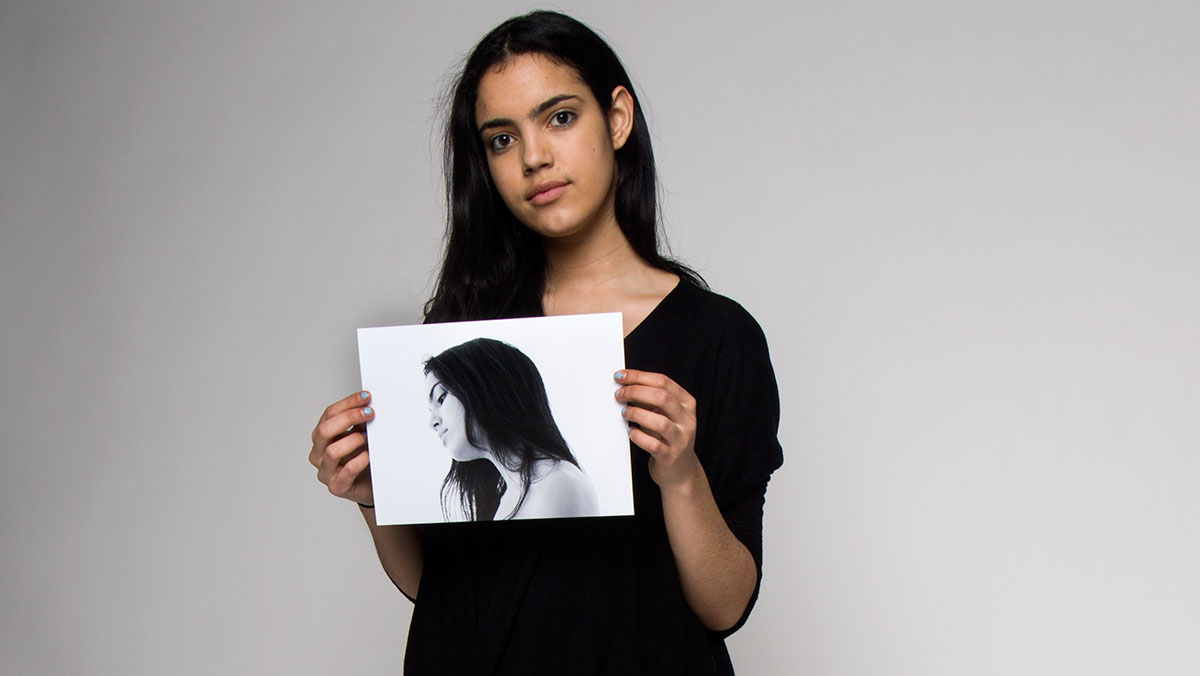 Connor Lange/The Ithacan
Ithaca College senior Gabby Jorio holds an old photo of herself to represent her journey facing adversity in the fashion industry. Jorio wants to use her passions for art history and fashion to revolutionize the fashion industry and society’s definition of beauty.
By Maura Aleardi — Staff Writer
Published: April 27, 2016

Ithaca College senior Gabby Jorio is using her passions for art history and fashion to revolutionize the fashion industry and society’s definition of beauty.

As a journalism and art history double major, Jorio’s GPA qualified her to be a member of the Lambda Pi Eta National Communications Honor Society. She said her professor elected her to be the vice president and asked her to speak at the honors ceremony in Spring 2015. She no longer serves on the executive board, as the position is renewed each year, she said.

One of Jorio’s professors, Matt Mokegwu, associate professor and chair of the journalism department, said she is a conscientious student who offers “invaluable contributions” during class. While he does not choose the members of the National Communications Honor Society, he said he can understand why she was chosen.

“One thing that makes her stand out is her willingness to learn,” Mogekwu said. “I recognize her as a student who is not ashamed to accept that she doesn’t know, because she wants to know.”

She also spoke at the 2015 Art History Senior Symposium as part of her exhibition seminar with Jennifer Jolly, associate professor and chair of the art history department. The class curated a show in the Handwerker Gallery called “As They Saw It: The Easby’s Collection of Pre-Columbian Art,” featuring objects collected by art scholars Dudley and Elizabeth Easby in the mid-20th century. In preparation for the curation, Jolly said, she invited artist J. Morgan Pewitt to host a workshop to help the students plan the show. Pewitt encouraged the class to come up with games that would prompt ideas and inspiration, Jolly said.

Jorio said she set up a game that required the students to use the objects in the collection as place settings on an imaginary kitchen table. This carried over into the final exhibit, which portrayed the objects as a representation of the Easby’s home. Jolly said this project showed Jorio’s creative talents.

Two things Jorio said influenced her love for art were her father, who works as a painter, and a trip she took with him to Spain. When she was a sophomore in high school, she visited the Prado Museum in Madrid, where she saw Diego Velázquez’s “Las Meninas.” This painting made her fall in love with art, she said.

After graduation, Jorio will intern at the Andrew Kreps Gallery in New York City. She said she plans to attend graduate school in Paris to study fashion and eventually become a style editor at a magazine. Fashion has always been a big part of her life, she said.

Despite developing an eating disorder from the pressures of the fashion industry, Jorio still plans to enter the industry as a style editor, hoping to combat negative stereotypes about women.

Jorio said she developed anorexia nervosa at age 18 after a few meetings with a modeling agency, during which she was told to lose weight. The agency scouted her at age 15, then asked her to come back at age 16 so she could travel overseas. When she hadn’t returned by age 17, she grew guilty of her decision and started dieting. When she was 18, she began therapy to combat the disorder, but after little success with the therapist, decided to try getting better on her own, she said. She turned to yoga, which focuses on respecting the body, stopped weighing herself and has been healthy ever since, she said.

“It definitely made me really strong,” she said. “The thing about eating disorders is it’s a mental disorder, and they don’t really go away. It’s just something that’s always going to be in you. I have to be really careful about dieting and weighing myself. I never weigh myself because I don’t want to get back into the habit.”

At first, Jorio said, she debated ditching her fashion career because of the negative experience she had with modeling, but she said she realized she can make more of a difference as part of the industry while still pursuing her passion.

“I want to be a spokesperson for women who don’t have the ideal body,” she said. “I think that there needs to be a lot more people like that because I don’t think people have the confidence or the courage to speak up against the fashion industry. It’s easy to write about it on blogs and stuff like that, but it’s one thing to be in the industry and talk about it.”

Kyla Ohayon, Jorio’s hometown best friend since age 3, said Jorio has grown from her struggle with anorexia and that it has made her into a driven, persistent person.

“She’s been able to do a lot internally and with herself, which shows her strength in being able to overcome these hard things that she’s had and without even reaching out to other people,” she said.