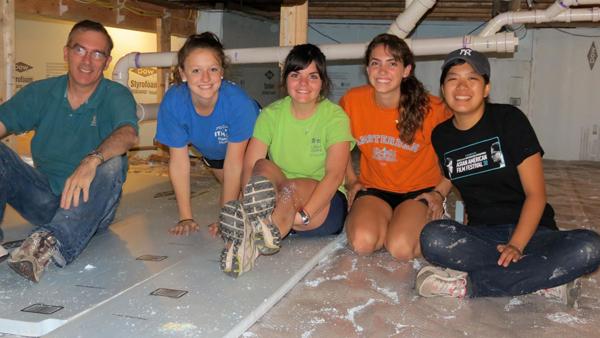 Courtesy of Jackie Keating
From left, Habitat for Humanity adviser President Tom Rochon sits with seniors Emily Holland, Jackie Keating, Heather Bissell and sophomore Samantha Yu in Corning, where they built a house as a part of a group project in Fall 2012.
By Sabrina Knight — Assistant News Editor
Published: January 31, 2013

On the south island of New Zealand, in an area that was struck by disaster from the Christchurch earthquake in Spring 2011, Jackie Keating, a senior who was spending a semester abroad in Spring 2012, saw the opportunity to put her skills learned from Habitat for Humanity to work.

Abroad in New Zealand, she was able to combine her love for the outdoors with her desire to help people in need. They shoveled, cleared driveways and gardened in an area that was vulnerable to aftershocks.

Keating has been an involved member of Ithaca College’s chapter of Habitat for Humanity, a national organization that helps fund and build houses for those who are unable to buy their own, since her freshman year. She has grown from a general member to president of the club.

Every winter, two to three break trips of about 20 students from the college go to locations in the east and south of the U.S.

According to HFH, the organization has built and repaired more than 600,000 houses and has served more than 3 million people around the world.

During Keating’s freshman year, she went on her first break trip for Habitat for Humanity.  She went to Oak Ridge, Tenn., where her experiences encouraged her to continue to get more involved in the organization.

Through her dedication to Habitat for Humanity, Keating said she has learned more about herself as a leader and the world she lives in.

“Your job as a leader is helping other people achieve what they want to do, so it’s really cool to work with general body members who are coming in, students who want to go on trips, and helping them to see new places,” Keating said.

President Tom Rochon, the adviser for Habitat for Humanity, said in the short time he has known Keating, he has learned a lot from her calm but efficient way of running the club.

“Watching Jackie in action, the primary thing I learn from her is simply having deeper human connections with other people that come from sharing a common goal and working toward it,” Rochon said. “It was a wonderful moment where I appreciated where Habitat for Humanity is really about. It’s about housing, but more fundamentally it’s about our commitment to each other as people.”

During her time as HFH president, she has co-led a winter break trip to Birmingham, Ala., between Jan. 12 and Jan. 20.

“Down there, we were in all the hurricane-damaged areas, so it was cool to see how they had to build all the houses up on stilts; they weren’t on ground level,” Keating said. “So during that trip we were doing a lot of work up high, building the scaffolding for that and working on the foundation for those houses.”

This spring, Keating plans to co-lead a HFH break trip to Delaware.

Each break trip has been a different experience, Keating said, and she has learned from each new adventure, expanding her knowledge about the towns she has worked in and the families she has helped.

Sophomore Samantha Yu met Keating through their mutual involvement in Habitat for Humanity. She said Keating’s stories about her work for the club were inspiring.

“It was really encouraging just to hear her share about how she got involved with Habitat, leading a break trip her sophomore year and just seeing her through that progression and seeing who she has become,” Yu said.

Keating said she learned a lot about herself through interactions with the children.

“It helps define who you are, because you learn pretty quickly when you’re working with kids that they’re not going to respond well if you’re faking something, so it matters who you are,” Keating said. “They’ll have more respect for you if you’re being authentic.”

Senior Emily Holland met Keating their sophomore year in Habitat for Humanity. They co-led many break trips together and are now roommates. Holland said she has learned a lot from Keating about being a leader.

“Because she’s so calm, it helps me to be calm,” Holland said. “It’s just realizing things are not as difficult as they seem and be creative and flexible when you’re in a leadership role, because everyone is coming from different views on things.”

Rochon said he encourages all students to try to get involved in leadership roles on campus.

“The greatest reason to be involved is because it takes you out of yourself and your immediate environment and immediate concerns, and it gives you a bigger perspective on the world and your place in it,” Rochon said.