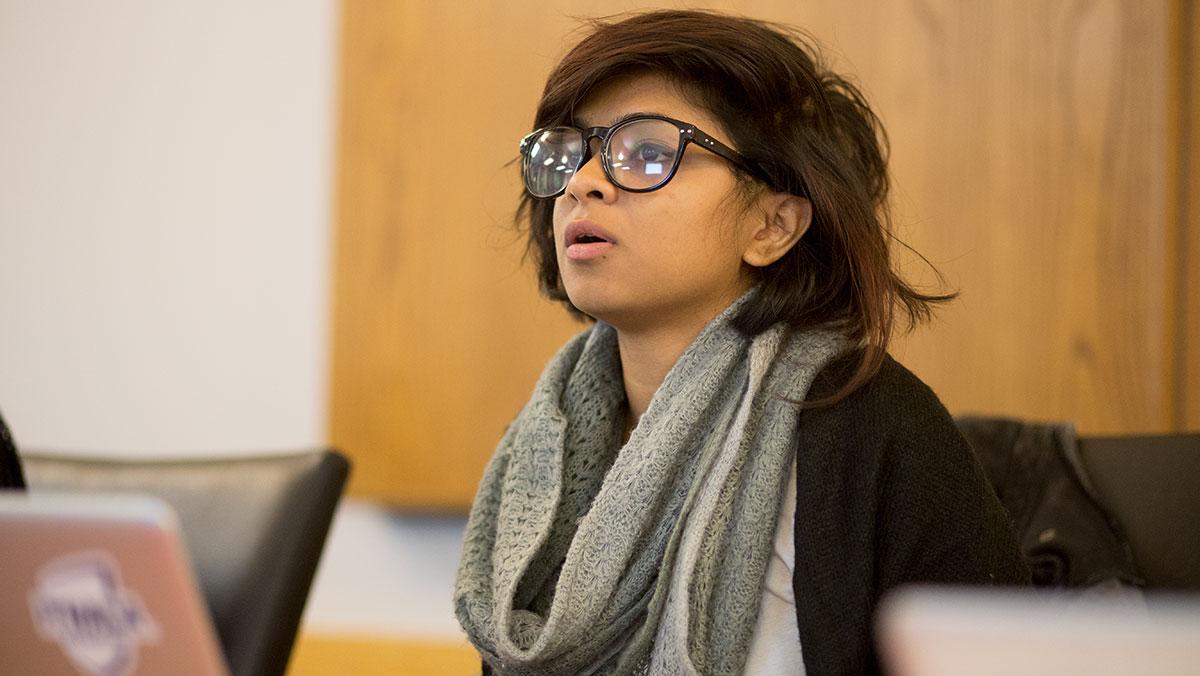 Yana Mazurkevich/ The Ithacan
At the first SGA meeting of the semester Jan. 26, it was announced that sophomore Anikah Shaokat stepped down from her position as Senate chair during winter break.
By Eddie Dowd — Contributing Writer
Published: February 11, 2015

Dremstedt is an integrated marketing communications major who transferred to the college from the University of Indiana this semester. During his time there, he interned at Indiana Public Interest Research Group, where he participated in food drives, polling and working with college students on issues that mattered to them. Running unopposed, he said his past involvements inspired him to take action.

“It got me really politically involved,” Dremstedt said. “I kind of saw what students could do on campus, and I kind of wanted to take that to Ithaca. I really think that students have a lot more power than they realize.”

Conners, an exploratory major, ran against three others and was not able to attend the meeting. Kyle James, vice president of communications, read a statement written by Conners, wherein he cited his knowledge of the college community and involvement as why he would make a good senator. Conners said being blind has also helped him make connections with many groups and offices here on campus by making him want to stay as active as possible in the community.

“You may not recognize me by my name, but if I said I was a blind student who’s always walking around campus with my cane, I might ring a bell,” Conners said in his statement. “Being blind opened up a conversations like for me to meet all sorts of people and different positions, which I feel would be providable here.”

Conners also said his involvement in many clubs, such as IC Colleges Against Cancer, IC Organic Growers and the debate team, has helped him to be connected with many communities at the college.

As a senator, he said would make sure decisions made in the SGA would have student accessibility in mind.

“Being someone with a disability, I realize the struggles that others like me go through, and although that people are great here, it’s not the most successful campus,” he said. “By being a senator, I can bring a voice to this group.”

At the first SGA meeting of the semester Jan. 26, it was announced that sophomore Anikah Shaokat stepped down from her position as Senate chair during winter break. There was no explanation given, except that she would be sending an email to the SGA explaining her decision.

Senior Ayesha Patel was elected to interim Senate chair at that meeting.

The newly elected senators will take part in moving these bills forward. Class of 2016 Senator Jacob Greenberg said it is important to have driven students elected to the SGA Senate to help further change.

“If you have the option to get someone who has a passion, specifically their own, driving them towards this position where they can make a change, that is essential,” Greenberg said.