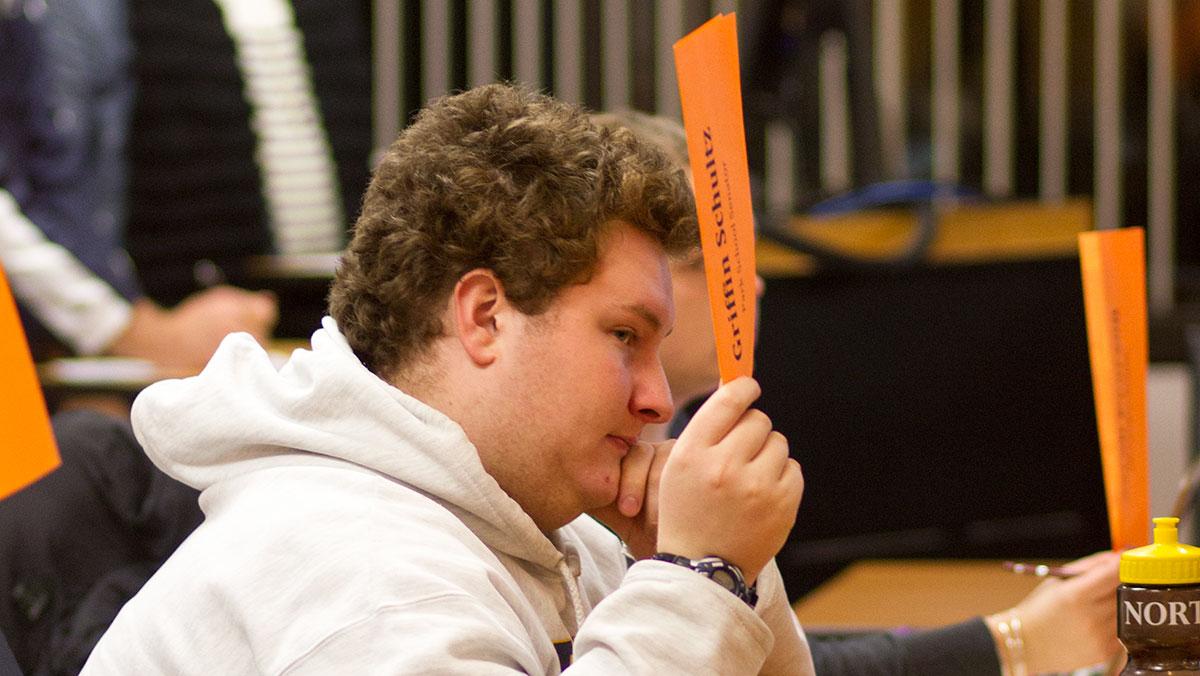 Amanda den Hartog/ The Ithacan
Sophomore Griffin Schultz wrote the bill SGA passed to provide a set of requirements on how to better structure and administer the survey in future years.
By Natalie Shanklin — Assistant News Editor
Published: February 18, 2015

After the results of the Fall 2012 Campus Acceptance, Inclusion and Fairness Survey were released 2 1/2 years after the survey’s initial distribution, the Ithaca College Student Government Association passed a bill Feb. 16 with a 13–1 vote to provide a set of requirements on how to better structure and administer the survey in future years.

The survey, which is often referred to as the campus-climate survey, was conducted by the college’s Office of Institutional Research and collected data from students, faculty and staff about their opinions on issues of diversity and inclusion on campus, feelings of unequal treatment, opportunities for open discussion and general satisfaction with the college atmosphere. IR’s recently released executive summary of the survey revealed notable perception gaps between different identity groups on campus.

The provisions, which were outlined by sophomore Griffin Schultz, senator for the Roy H. Park School of Communications, would see the administration begin planning and communicating for the next survey immediately. Surveys would be administered every two years with a four-month turnaround for results, which would be published in an executive summary to be released to the entire campus community. In addition, the bill recommends to the administration that an external consultant conduct all future campus-climate surveys.

“The importance of this bill is not only to hold our administrators accountable for the goals that they put forward for the college but also use this as a way to enhance and enrich the process,” Schultz said.

In previous years, IR did not hire an external consultant due to the higher costs involved. However, Senior Crystal Kayiza, SGA president, said she is confident the SGA can convince the administration to outsource the next survey, based on conversations she has had with fellow executive board members.

“The advantage of having an external source conduct the survey is that it works around the poor transparency between the administration and the campus that is characteristic of an internally conducted survey,” Kayiza said. “Institutional Research just doesn’t have the resources to effectively analyze the data.”

Senior Ayesha Patel, who was elected as Senate chair Feb. 16 after a close race with Class of 2015 Senator, Joshua Couce, agreed with Kayiza and said conducting the survey externally would help produce more well-rounded and structured results.

“Institutional Research asked a lot of questions [in the 2012 campus-climate survey] but didn’t give back a lot of results,” Patel said. “External consultants know how to better organize the research.”

Kayiza said the only issue that may arise with conducting the survey externally is a matter of timing. The bill recommends the survey be conducted every two years, but Kayiza said most external consultants conduct campus-climate surveys on a three-year basis.

Sophomore Kaitlin Logsdon, vice president of academic affairs, who has been involved in conversations with Kayiza about the survey, said maintaining the two-year frequency requirement while adding the external consultant provision is unlikely to be feasible.

“Realistically, the way that these external surveys are conducted, it’s going to be every three years,” Logsdon said.

Despite this complication, many senators advocated for the provision that required the survey to be administered every two years. Sophomore Tate Dremstedt, the newly elected transfer student Senator, said keeping the survey’s frequency at two years would better keep campus community members actively involved in diversity issues on campus.

“I just think keeping it two years will keep students and faculty more engaged in the discussion of diversity and inclusion,” Dremstedt said.

Due to the controversy over the timing of the survey, Schultz suggested the survey be administered twice in every five-year period as a solution. Senior Meredith Knowles, senator-at-large, countered and said it would be better to start with the two-year provision and then push to a three-year frequency if need be in the future. The bill passed at this resolution.

“We should go ahead and insist the survey be conducted every two years,” Knowles said. “I think it will let the administration know that this survey is important and needs to happen.”

Junior Kyle James, vice president of communications, has been collaborating with other executive board members, such as Kayiza, Logsdon and senior Aaron Lipford, vice president of campus affairs, on the campus-climate survey issue. He said the bill, which is in line with his own beliefs, was the appropriate step to take considering the disappointing manner in which the 2012 survey was handled by the administration in terms of process and timing.

“Students were unsatisfied with the way the survey was constructed and distributed, as well as the length of time it took for the administration to have the results analyzed and distributed,” James said. “The hopes of this bill are to establish a set time frame for how often the survey is conducted, set parameters about how it is constructed and who is included in the survey, provide the recommendation for external vendors to conduct the survey to eliminate bias and suggest a reasonable time frame for how much time should elapse between when the survey ends and when the results come out.”

Schultz said he is committed to following through with the bill’s provisions.

“I personally think that it is important to stand by the goals that are created and communicate to the student body and how progress is being made on them,” Schultz said. “Hopefully, though, this resolution the campus as a whole will understand that this is not a matter that is taken lightly by the student body and should be addressed by those responsible.”