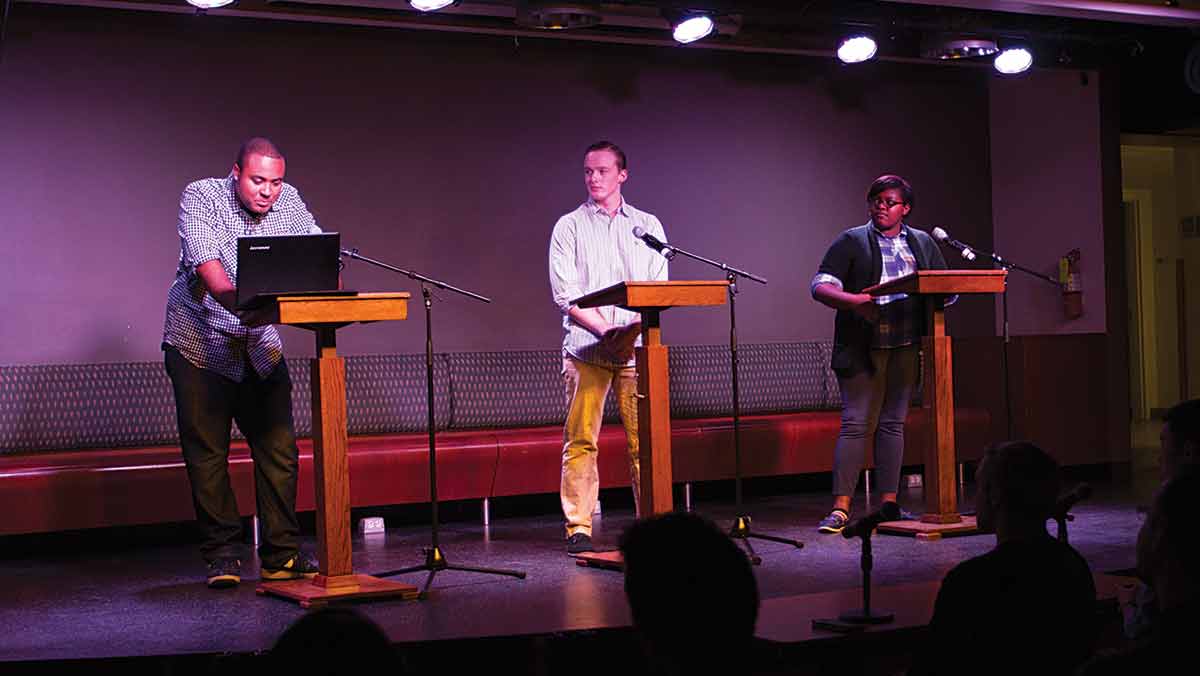 The Ithaca College Student Government Association is struggling to fill its senate and is looking to generate more student interest in senate positions.

The SGA will forgo passing any major bills until it can form a larger senate, sophomore Marieme Foote, the SGA senate chair, said. Foote defined major bills as legislation that would have a significant impact on students or a bill the SGA feels needs to be evaluated by more representatives than are currently in the SGA senate.

There are only five students running for the SGA senate in an election scheduled for Sept. 17, Foote said, with all the students running unopposed. Only three of those candidates were able to attend an event Sept. 14 to present their platform.

The senate body will consist of just 11 senators following the election, senior Dom Recckio, the president of the SGA, said. Foote said the maximum number of senators the SGA could have is 24. She said the SGA executive board has discussed the low turnout of candidates for the senate elections and has agreed they don’t feel comfortable passing major bills through such a small senate, citing 15 as the minimum number of senators the executive board wants before examining major legislation.

The SGA attempted to use social media to get students interested in running for student government, Foote said. However, following the low senator turnout, Foote said the SGA will continue working to prompt students to run for a senate seat.

“We’re going to try to do more advertising,” Foote said. “Maybe walk around and actually talk to people about it. We did a lot of advertising on Facebook and our social media sites, but it doesn’t seem like we got a lot of people [to run].”

Foote said students who are interested in being an SGA senator can submit a platform and show up to a regular SGA meeting Monday nights where they would present their platform to the senate body. The sitting senators would then vote on whether to approve the candidate into the senate. These senators, who were elected last semester, are Class of 2018 senator Angela Pradhan; senators–at–large junior Jonathan Gould and sophomore Jonathan Couce; junior Kaitlin Logsdon, School of Communications senator; sophomore Joseph Fenning, School of Business senator; and senior Attila Mendli, international senator.

Recckio said the SGA will likely not have any new members until Sept. 28 at the earliest due to the time needed to put another strategy together to engage students in running for a senate seat. It is imperative the SGA senate grow larger, Recckio said, as the current senators and executive board are not entirely representative of the college.

“We’re putting in a lot of work behind the scenes, and I’m not sure with the 10 to 12 senators that we will have that we’re going to be able to present some of the bills that we want to on things like the student bill of rights,” Recckio said. “I can’t present that to 10 people, I need a full senate that is completely representative of the student body.”

Sophomore Kyle Stewart, vice president of communications, said low numbers of candidates for senate positions has been a problem in the SGA before. He said that may be due to the culture of the college and is something the SGA should place an emphasis on trying to change through initiatives like a student bill of rights and state of the student addresses. Senior Kyle James, vice president of academic affairs, added it’s sometimes difficult to cut through the noise at the college and interest students in running for the SGA senate, especially when so many organizations on campus are vying for students’ attention at the same time.

While Recckio said the turnout of candidates for senate was disappointing, he said he was impressed by the platform presentations of the candidates in attendance at the Sept. 14 event. Recckio said many of the same themes, such as improving food on campus and fostering increased student engagement, were brought up by the candidates presenting.

“Our events should be something that the majority of us want and would like to do,” Carolina said. “No offense, but the faculty who grew up in the ’80s and ’70s don’t really know what we like to do.”

Thomas Horgan, who is running for Class of 2019 senator, spoke about the Class of 2019 being highly involved on campus. He said as a senator, he wants to help the campus flourish with student engagement and activity.

Horgan also mentioned the ongoing controversy involving the Office of Public Safety and its alleged racial bias against students of color in its policing practices at the college. Horgan said that kind of policing is unacceptable and advocated for mandating Public Safety officers wear body cameras. President Tom Rochon has approved the purchase of body cameras for all Public Safety officers, but said the implementation of the cameras could take some time.

Horgan said he wants to help foster a dialogue between students, Public Safety and the administration.

“In my opinion, there’s nothing more painstakingly unjust than when someone is treated unfairly because of the color of their skin,” Horgan said. “As your senator, I will do everything in my power to ensure that this campus is not only safe, but enjoyable for every single student.”

Lanise Starnes, who is running for the other Class of 2019 senate position, presented a list of initiatives she would like to pursue as senator. These include improving the food on campus, creating more activities for students to do around campus and fostering a more conducive student-alumni relationship.

Starnes said she also wants to make events on campus more interesting and enjoyable for all students and incorporate more African, Latino, Asian and Native American students into these activities on campus.

“A lot of times students don’t want to go to events because either they’re not interested or the events are just not that enjoyable,” Starnes said. “So I would like to ask the students what they want to do.”

Sophomore Charlotte Robertson, running for off-campus senator, and senior Megan Goldberg, running for senator-at-large, were not at the platform presentation. However, in her written platform, Robertson wrote she wants to maintain and grow the relationship between students and the Ithaca community. Robertson also wrote she wants to work with the college and Cornell University to create a cross-campus sexual assault policy.

“This policy will create guidelines for if an Ithaca College student is sexually assaulted on Cornell’s campus and visa versa,” Robertson wrote. “My experience as community outreach chair of Feminists United, my time serving on the College Advisory Committee on Campus Security and Campus Life, and my personal advocacy makes me a perfect candidate for creating this policy.”

Goldberg’s platform focused on the areas of sustainability, on– and off–campus safety, racial injustice and gender inequality. Goldberg wrote she wants to pursue initiatives pushing the college to implement more ambitious environmental goals. She also wrote it is important to discuss issues of racial injustice on campus, particularly after all the attention focused on Public Safety.

“I am further committed to joining conversations about racial injustice on this campus with individuals who must be heard and supported,” Goldberg wrote. “It is not enough to claim to be a supporter without purposefully engaging oneself in discussions, both as a listener and [an] orator.”