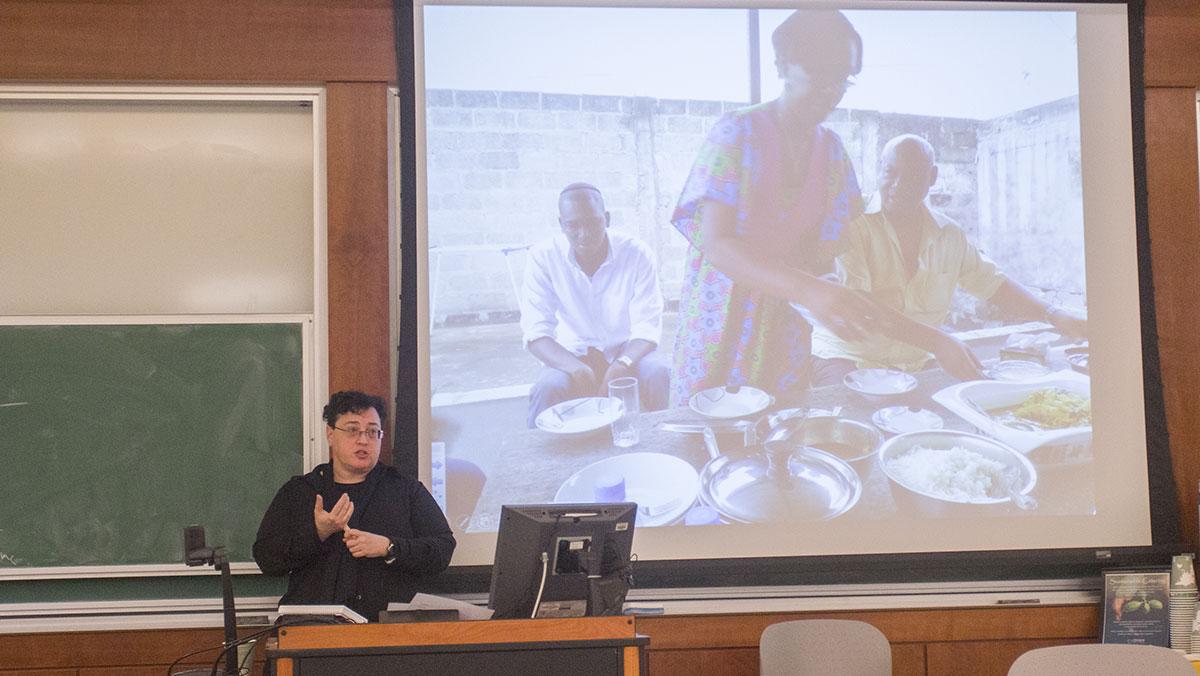 Danielle Schear/The Ithacan
Author Marla Brettschneider gave a talk on March 31 in the Park Center for Business and Sustainable Enterprise focused on communities in Africa that have newly been introduced to Judaism.
By Gianna Folz — Contributing Writer
Published: April 1, 2016

Author Marla Brettschneider explored the question “What does it mean to be Jewish?” when speaking to Ithaca College students and faculty on Jewish communities in Africa.

The talk, which was attended by 25 students and faculty, focused on communities in Africa that have newly been introduced to Judaism and the relations between these communities and ones in North America, Europe and Israel. It took place at 7:30 p.m. on March 31 in the Park Center for Business and Sustainable Enterprise.

“Literally in every region — Western Africa, Central Africa, Eastern Africa and Southern Africa — there are a variety of these communities,” Bretschneider said to the audience. “I am making an attempt to make sense of interactions which have vexed me and many others, such as how global northern, in often western modes, dominates the landscape.”

Brettschneider, who has made multiple research trips to Africa, said the purpose of the talk was to let people know that in sub-Saharan Africa, there is a wide–ranging Jewish-related phenomenon in which millions of people in Africa have converted to a type of Judaism in the last hundred years.

She touched on issues of imperialism and colonialism in an international context and examined them using a Jewish frame to explore issues of global North and South dominance.

The topics brought up in her talk all stem from her newest book, “The Jewish Phenomenon in Sub-Saharan Africa: The Politics of Contradictory Discourses.”

“Usually, when I am done with a book, I kind of want nothing to do with the subject, but this has been so different in so many ways,” Brettschneider said during the discussion.

Brettschneider is an author of four other books of topics almost all coinciding with Jewry, the term for Jewish people collectively.

The Jewish studies program coordinated the event, which Rebecca Lesses, a colleague of Brettschneider’s and associate professor and Jewish studies coordinator at the college, headed.

Lesses said Brettschneider was brought to the college to give this speech because of her important writings and the perspective they offer.

“She is a prolific writer,” Lesses said. “She brings her critical, politically aware perspective on this.”

Lesses said the talk opposes a commonly held notion that all Jews are from Europe.

“It challenges the view that all Jews are all of one particular background,” she said.

In the audience was Marcia Zax, the board chair of the Ithaca Area United Jewish Community. She said she dislikes the idea that a person’s race, background or appearance can dictate the validity of their religious beliefs.

“I reject that,” she said. “I think that it is completely wrong, and I don’t see that the African people’s Judaism as lesser than mine.”

Earlier that day, Brettschneider spoke in the class “Contemporary Jewish Identities: Gender, Race and Power,” about race politics, queer families and Jewish lives — relating to a book she wrote on the same topics, describing her experience as queer, Jewish and in an interracial family. Some of the students from that class also attended the talk.

Freshman Segaro Bozart, a member of the class, said Brettschneider allowed him to think about new ideas.

“It really made me realize how little I know about the world and about people and cultures everywhere,” he said.

“I really liked this talk because, as an African, I had only previously heard about black Jews once before,” she said. “It was interesting to learn how the Jewish religion had come to form various different expressions of Judaism in various countries.”

In addition to being an author, Brettschneider is a professor of political science and women’s studies at the University of New Hampshire. She coordinates the queer studies program there as well.

Gianna Folz can be reached at gfolz@ithaca.edu or via Twitter: @giannafolz