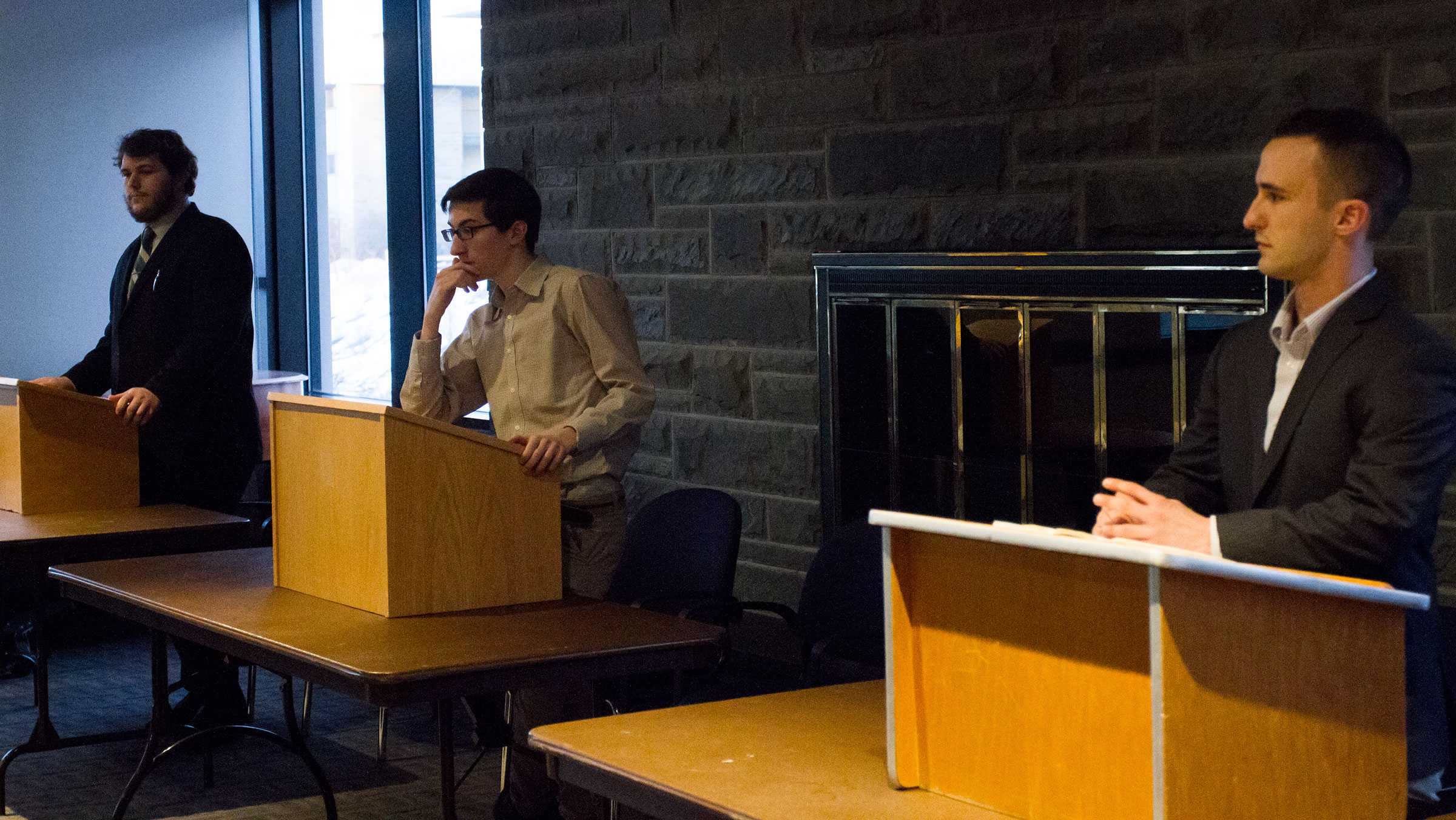 In a show of collaboration, students of various political ideologies joined to discuss, debate and disagree on major issues facing the campus and the country. Diversity in the student body, Hillary Clinton’s emails and immigration were all topics in the debate held March 17 among Ithaca College’s three political organizations.

Sophomore Josh Kelly of IC Progressives, sophomore James Dellasala of IC Democrats and junior Sean Themea of IC Conservatives fielded questions students submitted online prior to the debate. About 25 students attended the event in Clark Lounge, which was moderated by Donathan Brown, assistant professor in the Department of Communication Studies. The event, which was organized by the three clubs, was the second political debate among the groups this year.

The first topic of the night centered on diversity on campus and the results of the 2012 Campus Climate Survey. All three representatives agreed more work was needed to address problems that the results of the survey showed. Kelly said the college should listen to students for solutions.

Themea said the campus must continue the discussions that began last year on the topic of microaggressions.

“When our voices are strong and consistent enough, we can then have the people in the administration who can make institutional changes on campus to stand in solidarity with us,” Themea said. “We need that joint effort to make a change.”

“We can try to, if not get rid of national boundaries, at least try to get rid of the problems that boundaries cause,” Kelly said. “We should be allowing more people into the United States to find the jobs that they want, the lifestyle they want and the peace that they want.”

Dellasala said America is not a country with its own skin color and nationality but a country of values. He said the Democrats would like to see a pathway to citizenship and the granting of amnesty to those who come here legally. Themea agreed the immigration system is broken but cautioned against quick action without first considering the financial aspect of amnesty and deportation.

Clinton’s email scandal was also discussed during the debate, with Themea arguing the former secretary of state had circumvented the Freedom of Information Act. Dellasala said he believed Clinton did make a mistake but said the issue is not as important as some might see it.

As for the 2016 presidential election, each representative provided his pick for the Oval Office. Kelly said while he would like to see a Green candidate win, he would support Independent Sen. Bernie Sanders. Dellasala said Clinton is the best choice for the Democratic Party, while conceding Elizabeth Warren may actually be a better president. Themea said he would like to see Sen. Rand Paul win, but said he believes Gov. Scott Walker is currently the best suited to receive the nomination.

Senior Jaclyn Meshako, a member of IC Progressives, said she attended because it is important to support debates on campus. She was especially pleased to see that the debate featured three parties and not just two.

“I loved it, the little banter they had going on,” Meshako said. “It was great to see the three different views in this kind of debate. It was really impressive and motivating.”

Brown said he believes the debate went very well and was pleased that all of the questions were answered within the hour time frame. He said he decided to moderate the debate because he hopes to encourage students to learn the perspectives of each political group.

“I love seeing a political debate between the three individuals,” Brown said. “I teach campaigns and elections, so it’s right up my alley.”