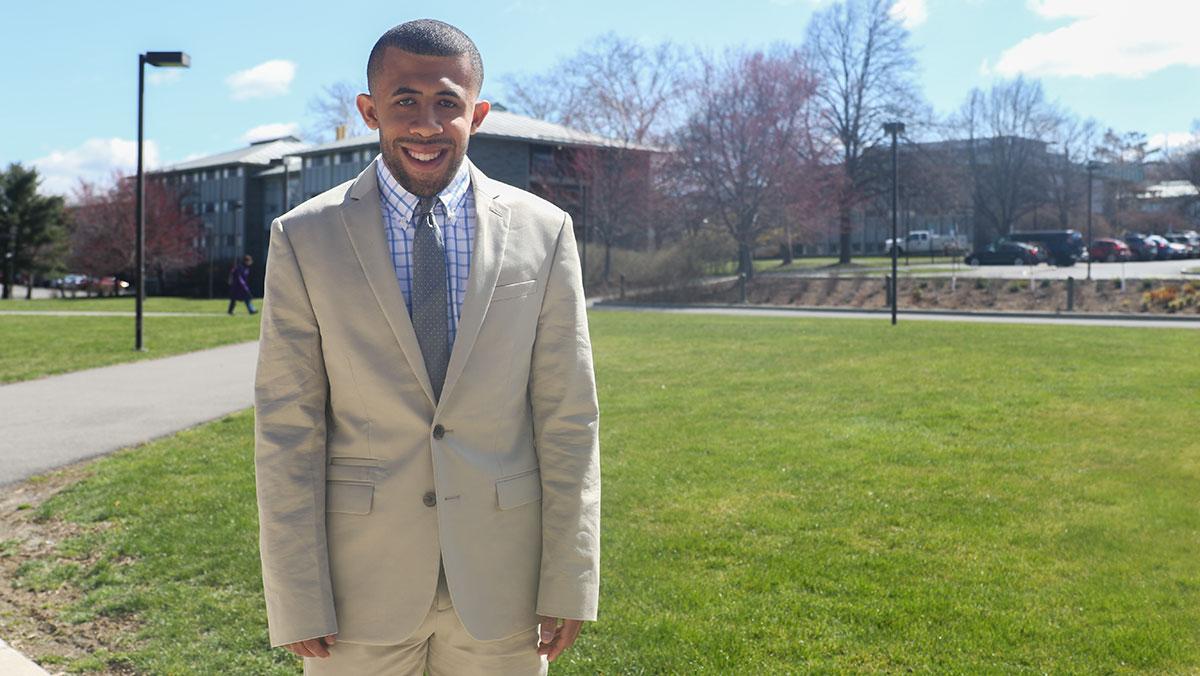 Amanda Den Hartog/The Ithacan
Senior Elijah Breton announced he will be running for District 65 of the Maine House of Representatives in November 2016. Breton is just one of a growing list of politically engaged youth from the Ithaca area.
By Mark Prowse — Staff Writer
Published: April 6, 2016

Elijah Breton, senior sports studies and communications studies double major, recently announced he will be running for District 65 of the Maine House of Representatives in the November 2016 election season.

Breton is adding his name to a growing list of politically engaged young people coming out of the Ithaca community. In addition to the well-known example of Ithaca Mayor Svante Myrick, the second youngest mayor in New York State at the age of 29, young politicians like Nate Shinagawa, who served as Congressional nominee and Tompkins County legislator starting his political career at age 21 and Cornell University sophomore Elie Kirshner, who ran to represent District 4 of the Tompkins County Legislature in the fall of 2015, are changing the profile of area political candidates.

Huffpost Politics published a list last year profiling the youngest legislators in the United States, the youngest of whom was 19-year-old Saira Blair of the West Virginia House of Delegates. Twelve other politicians were mentioned, falling in a tight age range between 22-year-old Aundré Bumgardner of Connecticut and 25-year-old Sarah Laszloffy of Montana.

Breton, 21, is running against Ellie Espling, the incumbent candidate for District 65 and the House’s assistant Republican minority leader. Espling is currently serving her sixth year and third term as a Maine state representative.

Breton said his youth is one of his greatest assets, as it would allow him to create better connections with the younger demographics in his home state.

Bringing renewable energy to Maine serves as a fundamental part of Breton’s campaign platform. He cited the state’s long history in manufacturing and said introducing clean energy industries could revitalize a drooping economy as well as encourage the younger generation to stay.

He said some of the money earned from reshaping the manufacturing industry of Maine would go toward improving the state’s public education system, which he said has been suffering in recent years.

“I believe that today’s generation gets excited when we talk about clean, renewable energy; that’s a big thing that I noticed here at Ithaca College,” he said. “We can create jobs. We can motivate and incentivize younger people to stay in the state of Maine. … That, in turn, can help supplement our economy greatly.”

Nate Shinagawa, a 2005 Cornell graduate, began his political career at the same age as Breton at 21 years old. Shinagawa first served as a Legislative Aide in the New York State Assembly in 2007, before going on to be a Congressional Nominee in 2012. Most recently, he served as a County Legislator for the Tompkins County Legislature for nine years from 2006–2015.

Shinagawa said the Ithaca community creates a culture of empowered young people, ready to challenge the traditional demographics of those who run for office. He said certain constraints make those in office a “privileged group.” However, this notion is beginning to change in Ithaca.

“In Ithaca … we started getting young people in office and showed it could be done,” Shinagawa said.  “The wave of leaders like Svante … and my time on the legislature … and all these other folks have been able to show that young people can actually become leaders in the community and it has inspired other young people.”

Joseph Murtagh, alderman for the City of Ithaca’s 2nd Ward, has worked alongside Shinagawa. Murtagh said having a fresh perspective as a young politician is extremely important for a community. However, he said electing younger candidates solely for the fact that they are young is not necessarily a good idea.

“I think it’s important to encourage youth to run, but you also want to find the best person for the job,” Murtagh said. “But If you feel like just because you’re young, you don’t have a shot at it … that’s a serious problem. So it’s important that we open the doors for people to run.”

Often, he said, public perception of candidates’ political experience will undermine young people’s efforts to run for office. Given two very similar candidates, Murtagh said, the one with more years as a politician will almost always win.

Kirshner, who lost in the 2015 race to Democratic write-in candidate Rich John, experienced the same issues Murtagh described. Although Murtagh said the Cornell sophomore gave a better interview, the public responded to John’s longer history of experience at the ballot box. However, Kirshner said he has no regrets about running.

“There’s this perception on the part of others that you’re not experienced enough. … You really need to go the extra mile to show your face and make yourself known,” Kirshner said. “But the biggest difference you can make is just by running. Even if you don’t win, you are changing the political conversation.”

Breton said he has a large support network at the college to help him overcome the age-related issues Kirshner and Murtagh described.

Stephen Mosher, professor of sport management and media at the college, has been one of Breton’s many mentors throughout his academic career. Regarding involvement in POC at IC and other student councils, Mosher said, Breton has always shown a desire to “right wrongs” in politics and advocate for social change.

Breton was heavily involved in the initial days of the POC at IC movement — which stands for People of Color at Ithaca College. Breton helped lead rallies and gave speeches at Free Speech Rock in the movement’s formative period, which Mosher said demonstrates not only strong public speaking skills, but a passion for change.

“Elijah is willing to dream the impossible dream,” Mosher said in an email. “His greatest strength is that he is not willing to accept terrible decisions on the part of the administrators.”

Mosher said Breton’s young age would only matter to voters who do not listen to his message.

“I have no doubt that Elijah can perform all of the tasks of the position he seeks,” he said.

Breton said he is fully aware of the negative impacts his young age could have on his campaign, but he said while some might only see a lack of experience, he sees a much-needed fresh perspective for the Maine legislature.

“I want to make sure I represent Ithaca College well,” he said, “And I’m hoping that my running will inspire or influence someone else to take a big swing at what they do with their career.”