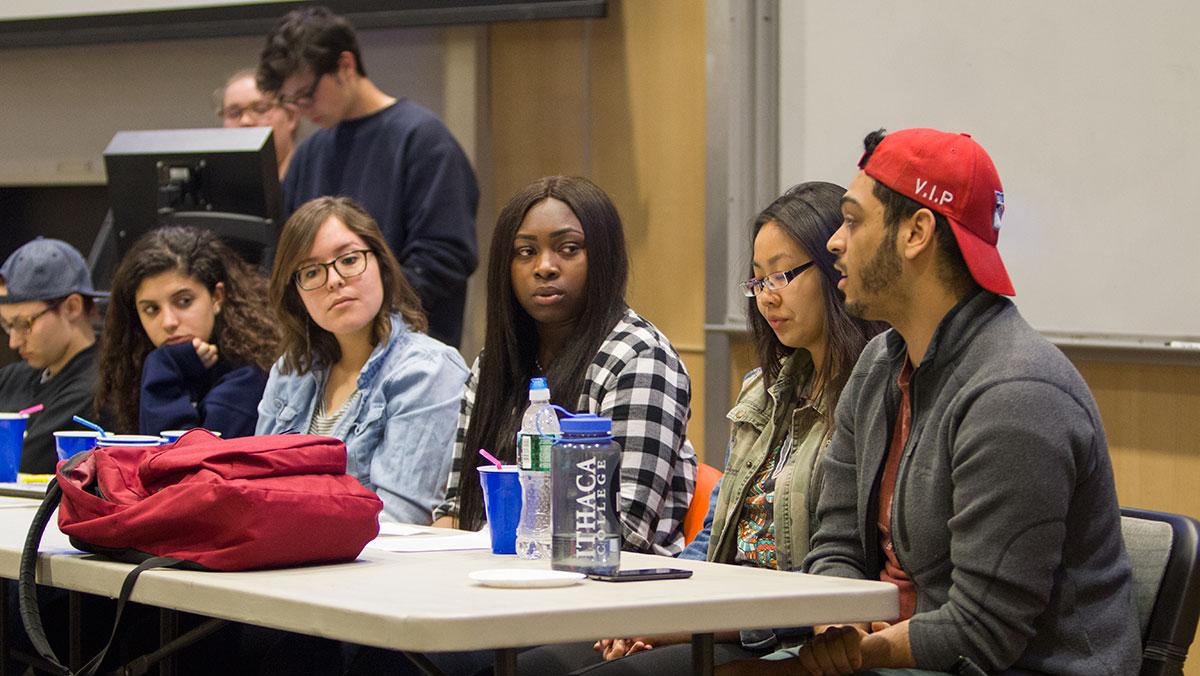 Students shared their experiences with mental health and its intersection with race, gender and sexual identity at a panel titled “We’re Here, Too,” encouraging audience members to ask questions and engage in conversation to help break the stigma surrounding mental health.

The panel was held at 8 p.m. April 20 in Textor 102 and emphasized marginalized communities, which are each impacted differently by mental health, through the sharing of personal experiences. It was run by Active Minds, a student health organization designed to increase awareness of mental health and provide students with related resources. This “Speak Your Mind” panel encouraged dialogue, helping people currently dealing with mental health to get help, talk about their experiences and start to break the stigma.

Sophomore Alex Lopez, one of the co-presidents of the organization, said the title of the event describes marginalized groups’ struggle to be heard.

“LGBT people, POC and other marginalized groups are here too, and their/our mental health is important and should be talked about more both in general and within those communities,” Lopez said.

Mendez shared her struggles with self-harm, emphasizing the particularly harsh stigma surrounding mental health in the Dominican community, the importance of talking about mental health issues and the inaccurate stereotypes of people struggling with those issues.

“When people talk about self-harm and depression, they imagine someone,” Mendez said. “I looked completely normal. I had a great group of friends. My family was huge. No, I didn’t paint my nails black. No, I didn’t wear long sleeves. I didn’t fit into what everyone thought was an unhappy, self-harming person.”

Lewis, a citizen of the Muscogee (Creek) Nation, the fourth largest Native American tribe in the U.S., shared the story of her father’s alcoholism in the context of a history of mental health problems within the Native American community. She spoke about the correlation of forced assimilation with increased substance abuse, alcoholism and suicide rates.

“The specific feature of not being able to cope is something that has carried down through the generations and still affects us,” Lewis said.

Osei talked about the difficulties of trying to help a friend who self-harmed, and Tan talked about her sister’s struggles with mental health as a second-generation Chinese-American — where mental health is “taboo” and the stereotype of Asian intelligence is prevalent. Almanzar spoke about his brother’s depression, which he said arose partly because his brother has darker skin than the rest of the family.

After the panelists had finished speaking, audience members engaged in discussion with them. They asked questions with raised hands and via small pieces of paper distributed throughout the audience.

The panelists advised audience members to educate themselves and be patient when supporting a friend or family member with mental illness, to rely on friends for help, to take courses about mental health, to utilize campus resources and to recognize their own bravery in talking about mental health issues.

“It should be talked about earlier in school,” Kohler said. “As a future educator, I know that I am going to share my experiences no matter how old they are. … If a kid asks about my gender, I’m going to tell them.”

Sophomore Erin Strahley said she appreciated the wide range of perspectives shared at the panel.

“It was cool to have a different perspective, specifically the diversity of it,” Strahley said. “I took a class last semester that didn’t really incorporate the diversity and how that affected their mental health. I think it’s important to recognize that.”

Sophomore Zoe Sheehan said she thought having such a diverse panel was “really impactful.”

“It was a very wide range of diversities, which was really awesome,” Sheehan said. “And they all had very different stories.”

Sophomore Molly Robbins, who helped coordinate the event, said the event was successful in giving a voice to marginalized communities and beginning a conversation about how mental health differs in different communities.

“We had a great turnout,” Robbins said. “It looked like the audience was really engaged. It looked like people left talking, and that’s what we want. We’re hoping people continue the conversation.”