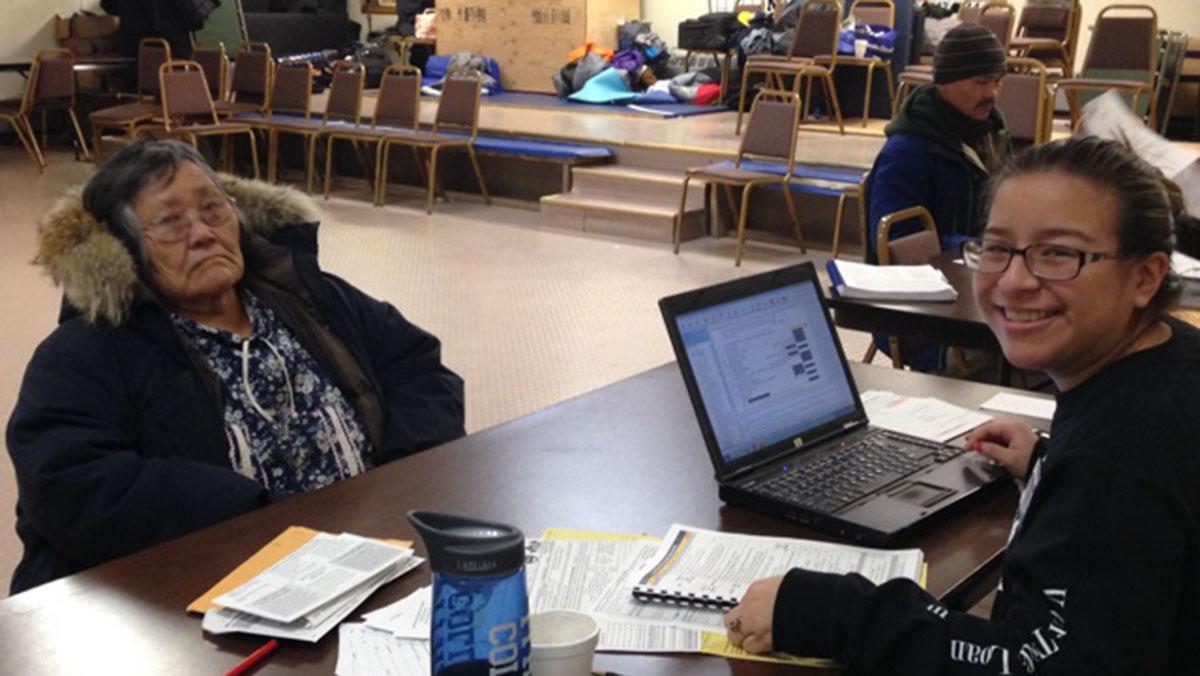 Three Ithaca College students and an accounting instructor prepared tax returns for over a hundred rural Alaskan villagers as part of the Voluntary Income Tax Assistance program during a 10-day trip March 5–14.

VITA is a nationwide program of the Internal Revenue Service that provides free tax assistance for people with an income of $53,000 or fewer, the elderly, those with disabilities or those who may speak limited English.

The college’s department of accounting, in collaboration with the Alaska Business Development Center, has been sending senior accounting students to Alaska to be volunteer tax preparers since 2002, Alan Cohen, the associate accounting professor who first began taking students up to Alaska, said. He said the program began to allow accounting students to experience what it’s like to process taxes in a real certified public accountant firm. Every year, students go to a different rural Alaskan village where the people do not have access to a tax preparation office.

This year’s team consisted of three senior accounting majors — Meghan Hellwitz, Alice Lainez and Jacob Thorpe — and Mary Bouchard, an instructor at the college who is also a certified public accountant.

Bouchard said the team processed about 135 tax returns in the rural villages of Toksook Bay and Newtok in Western Alaska, which have a combined population of fewer than 1,000, according to the U.S. Census Bureau.

“We worked in a community center in the village and we slept in the library of the school,” Bouchard said. “It was kind of rough.”

Hellwitz said she and the team had to work long hours because of the high volume of people who came in to get their taxes done.

“We got up around 8:30 [a.m.] and ate breakfast, usually vegetables in a squeeze pouch, and then we went right into doing taxes until about 9 o’clock at night,” she said.

Every tax return that was completed by the students was checked by Bouchard for errors before being electronically filed to an IRS office in Fairbanks, Alaska.

Lainez said the 12-hour shifts weren’t as bad as she expected because she was able to engage with the villagers.

“It was the contact with the people, not necessarily the sitting down and doing taxes part, that was really enjoyable,” Lainez said. “[The villagers] would ask us questions about our daily lives and we would also ask them how their life was like. They were fairly open in telling us, so I was able to get some insight into their lives.”

Hellwitz, Lainez and Thorpe were certified to be volunteers for the VITA program, but Bouchard said once they arrived in Alaska, they had to receive additional training because people in Toksook Bay and Newtok are so isolated that their lifestyles and financial situations are in stark contrast to those in most other places in the U.S.

Hellwitz added that there were many villagers who came to file their taxes who had little to no understanding of what it means pay taxes.

“Things that would seem simple to us, we had to explain it to them,” she said. “Things like income, expenses and dependents, I had to tell them that just because someone lives with you, it doesn’t mean that he or she is a dependent,” she said.

Thorpe said he also had to deal with a number of unusual circumstances while filling out the forms.

“There were unique situations where three or four generations were living under one roof,” he said. “There was also this one fisherman whose boat sank, and I had to figure out a way to write that off for him without it being illegal.”

But Bouchard, who has been on this trip twice, said having large families and fishery is common practice in many Alaskan towns. In fact, she said the Alaska Business Development Center began inviting VITA volunteers to rural Alaskan villages because fishermen from remote areas needed to pay taxes in order to be able to receive bank loans to, for instance, purchase boats.

Otherwise, the villagers are almost completely isolated from the modern society, Bouchard said.

“They’re basically living on the tundra, so it’s subsistence living on what they hunt and fish,” Bouchard said. “They eat moose, muskox, seals and walruses. It’s a very different lifestyle.”

Lainez said they didn’t have cellular connection the entire time they were in the villages and had access to Internet for only a few hours at night in the school they were staying. But despite the lack of amenities and technology, she said the trip was time well spent.

“At the end of the day, I was tired after working for 12 hours, but it was very interesting meeting a very different culture,” Lainez said. “It’s something that I think I would do again.”