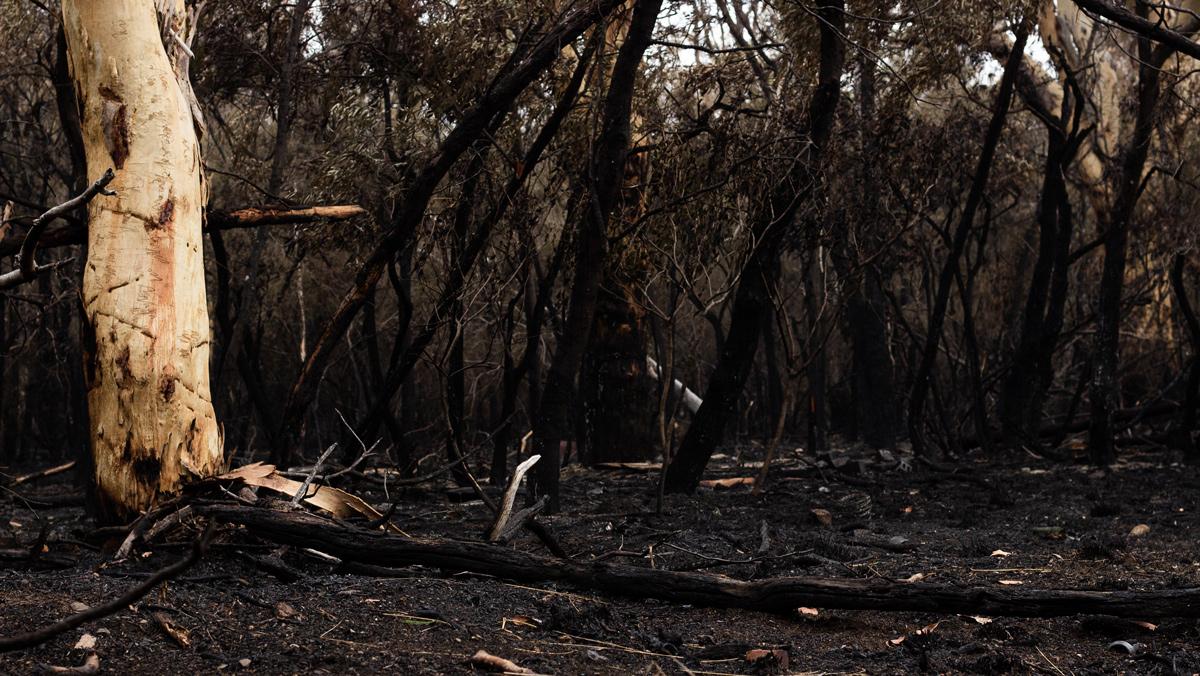 Courtesy of Jordan Brown
Sophomore Jordan Brown and Grace George, who are both cinema and photography majors at the college, are currently studying abroad at the University of New South Wales in Kensington, Australia. Although they had heard about the fires in Australia on the news, neither realized the scope of the problem until they were standing face to face with it.
By Ryan Bieber — Staff Writer
Published: February 20, 2020

When Ithaca College sophomores Jordan Brown and Grace George stepped off the plane in January in Sydney, they immediately got a whiff of smoke.

“I just remember walking off the plane and thinking, ‘Wow this is so real,’” George recalled. “It was smoky in Sydney, and we were 200 kilometers from the nearest fire.”

Brown and George, who are both cinema and photography majors at the college, are currently studying abroad at the University of New South Wales in Kensington, Australia. Although they had heard about the fires in Australia on the news, neither realized the scope of the problem until they were standing face to face with it.

“The first thing you smell is smoke,” Brown said. “You see people wearing masks because of the air quality.”

This year’s fire season began in September 2019 and is just beginning to die down, approximately six months later, because of massive rainfall.

Although bushfires are a common occurrence in Australia, this year’s fires are unprecedented. The Australian climate has become increasingly dry and hot, resulting in longer and more intense fire seasons. This is a trend that has rapidly increased over the past 200 years in Australia, an occurrence that many scientists attribute directly to climate change.

The result has been extreme fires that have ravaged the ecosystem, destroying millions of hectares of forests and killing an estimated half a million to a billion animals, many of which are exclusively found in Australia.

Patrick Baker, professor in the School of Ecosystem and Forest Sciences at the University of Melbourne in Melbourne, Australia, said that Australians were previously able to prepare for the summer fire seasons through a process known as “prescribed burning.”

The process consists of running relatively cool fires during the winter so there is less that will burn during the summer, Baker said. But he said climate change is making it harder for Australians to prevent and control fires.

“Because of the warming climate, the opportunities to control or prescribe fires in the forest is getting narrower and narrower,” Baker said.

He said this is because the autumns are drier and the winters are shorter than before, an issue that is reducing the time frame in which Australians can prescribe burn. As opposed to having two to three months, he said they have weeks.

Australia is the world’s No. 1 exporter of coal, a fossil fuel that significantly contributes to the production of greenhouse gases. These greenhouse gases, in turn, accelerate climate change, which leads to longer and hotter fire seasons.

There have been pointed protests recently because many feel Australian Prime Minister Scott Morrison is failing to address climate change and rather is downplaying and denying its existence.

When Brown and George arrived in Sydney, they found themselves smack in the middle of the controversy. Brown said they knew they had to act and wanted to let their photography tell the story.

“I think through film and photography you can talk about things that don’t get talked about, like the bushfires,” he said. “I just felt like I had to say something and speak up.”

Brown immediately began reaching out to different fire and rescue companies in hopes of tagging along with the crew, but he was turned down.

“A lot of people would say it was too dangerous or that they couldn’t send me out there,” he said. “After a lot of rejection, I just looked up where the fires were, and I went to the train station and walked to the aftermath of a fire.”

Jordan took a two–hour train ride to Voyager Point in West Sydney using a website that documents the whereabouts of ongoing fires to find places to photograph. When he first got to the preserve, Jordan said that he was shocked.

“I didn’t take photos for a while, and I almost forgot why I came,” he said. “As soon as I saw the aftermath and how much was truly burnt, I just stared at it. It was a sight that kind of put you in awe.”

Voyager Point is in Southeastern Australia, which is a region of the country being greatly impacted by the bushfires, according to reporting from The Australian.

When Brown began taking photos, he realized the difficulty of shooting fires and smoke.

“It was almost like going into a cloud,” he said.” It would get so dense where you literally couldn’t see 10 feet in front of you. Every time I would take a photo, it would just look like a white screen.”

Former Ithaca College student Faith Meckley has lived in Canberra, Australia, for the last three years. She said the conditions caused by the bushfires are concerning.

“I’ve never experienced anything like this before,” she said. “We received smoke on an almost daily basis, and some days it looked like a fog it was so thick. It’s disconcerting not being able to see the sky or any landmarks that you’re used to.”

After his initial trip, Brown reached out to George, and the two of them attended a massive protest on Jan. 10 in Sydney. Approximately 30,000 people were in attendance, with similar political protests being held in every capital city in the country on the same day. The protesters demanded that the government not neglect the climate crisis, including the bushfires, and provide relief services.

George said the two were able to sneak onto the media platforms and take photos of the protest.

“Nobody was asking for press passes,” she said. “The two of us just had our cameras in our hands, so we walked right up. … It was just amazing to see everyone there and feel all this energy and power of the people.”

Following the protest, Brown and George went to the Blue Mountains National Park to capture more photos of the bushfires. George said she had a similar reaction to Brown regarding the aftermath of the fires.

“It feels sort of apocalyptic in a way,” she said. “I think the photos I got really kind of demonstrate the gloom around it.”

When Brown returned to the city, he said that he reached out to everyone he knew to get their photos published by major media outlets.

“The night that I got all the photos, I stayed up until the sun came out,” he said. “I reached out to every news outlet in the United States saying, ‘I have these photos of the Australian bushfires and the protests going on.’ Everyone kind of turned me down, but I had the connection from an affiliate with PBS. I reached out and said, ‘I have these photos and think they should go out there.’”

Brown did an interview with his hometown radio station, WITF in Harrisburg, Pennsylvania, where his and George’s photos were published.

During the first weeks of February, Baker said that massive rainfall has helped to either contain or completely put out the fires. While one problem has been extinguished, Australia is now facing a different challenge as massive flooding plagues the country.

Baker said that while these drastic changes are nothing new, the intensity of the changes has gotten worse over the years.

“Australia is a continent of extremes,” he said. “In the context of climate change, it will continue to happen and … get worse.”

With the fires dying out, Brown and George are taking a break from their first few wild weeks. Nevertheless, both said they have their cameras at the ready. Brown said he is glad his photograph helped to bring awareness to the severity of the fires because some are unaware in the United States.

George said she has always loved nature and spending time outside, which is why she is very passionate about environmental issues.

“I just think it was a really startlingly large example of climate change,” she said. “It’s frustrating when you see people in power refusing to accept or help fight against climate change. I think coming here has continued to fuel my passion to share stories about the environment. This [Earth] is all that we have, and we’re really in a dire situation at this point.”

Faith Meckley was previously news editor of The Ithacan.

Commentary: America, you’re not as great as you think, love Australia

Ithaca College sends students to Australia for a semester abroad

For the next two weeks, Nancy Rader, professor of psychology, will monitor the psychological stability of Australian native Lloyd Godson while he is isolated in an 8-by-10-foot tank under 15 feet of water in Albury-Wodonga, Australia. Staff Writer Nathaniel Weixel spoke with Rader via e-mail about the BioSUB project and the psychological and environmental impacts…