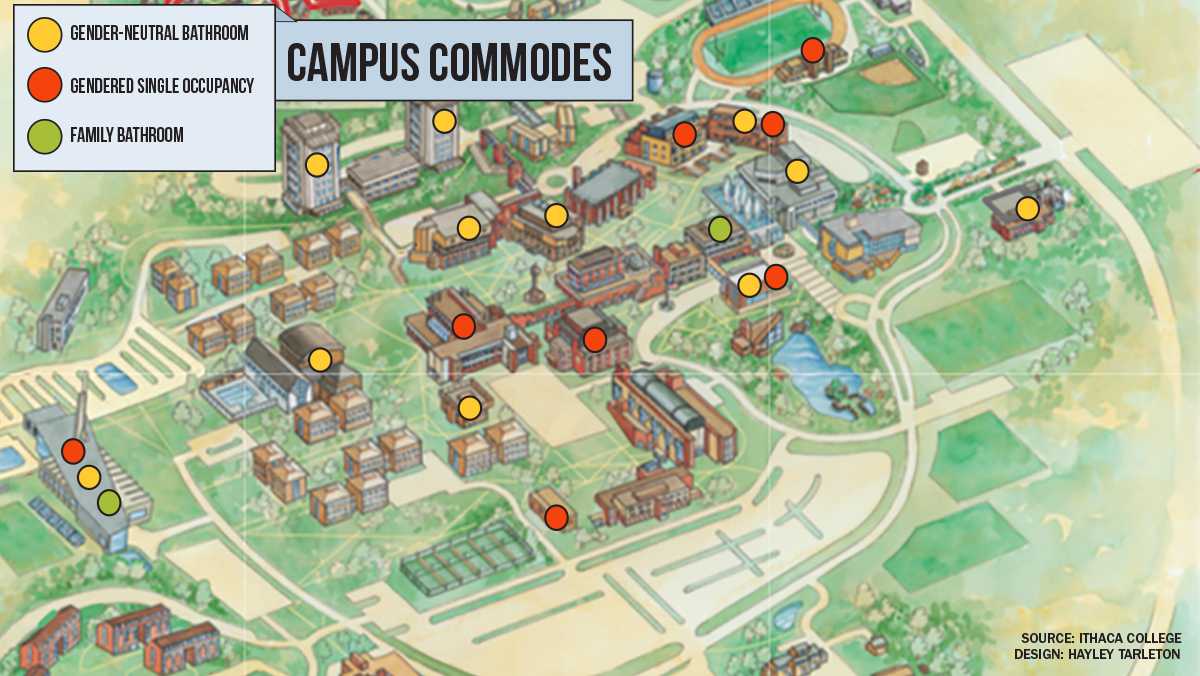 Locating a bathroom on campus is a daily struggle for Rae Enlow, an Ithaca College senior who does not identify within the gender binary.

Fred Deutsch, a state representative for South Dakota, argued against South Dakota’s recent passing of the “Bathroom Bill” on Feb. 16 through the state senate, requiring public school students to use bathrooms based on their “chromosomes and anatomy.” Deutsch said it is necessary to protect the right of transgender students to use alternate bathroom accommodations if they do not wish to use the facilities corresponding to their assigned sex.

Luca Maurer, director of the Center for Lesbian, Gay, Bisexual and Transgender Education, Outreach and Services, said the center’s working definition of a gender-neutral restroom is a single-user restroom that has a locking door that people of any gender may use. He said ideally it would have a sign that says “all-gender restroom,” “gender-neutral restroom” or simply “restroom.”

Gender-friendly restrooms may not be labeled neutral, but are accessible to transgender and gender nonconforming people with modifications to allow more privacy.

In 2012, students and the center released Pee in Peace, an app that shows all gender-neutral bathrooms on the college’s campus, Cornell University’s campus and the greater Ithaca community.

According to the app, there are nine gender-neutral bathrooms on the college’s campus. According to the center’s website, there are 38 gender neutral–accessible restrooms in nonresidential buildings. This count includes male and female single-occupancy restrooms.

Some students have expressed that though there are resources for transgender or gender nonconforming students, there are not enough.

“I don’t use the app because it’s like, ‘Oh there’s a bathroom! … and it’s a 10-minute walk away,’” said an anonymous transgender junior. “The ‘we need to pee’ thing isn’t just an Ithaca College–campus thing. This is everywhere in the world.”

Enlow said there is a difference between single-stall bathrooms and bathrooms that are specifically designated as gender neutral.

Beginning immediately, the housing-selection process, through the Office of Residential Life and the center, will give students the option to view the bathroom configurations of buildings before making their housing decision, said Jenny Pickett, assistant director of operations for Residential Life.

The college also works on a case-by-case basis to adjust existing bathrooms so they are suitable for gender-neutral usage, Pickett said.

Junior Rachel Gray said when she was a resident assistant in Terrace 2, she was able to designate the genders of the three bathrooms on her floor. She made one of the floor’s two single-user bathrooms gender neutral.

“I really appreciated living on a floor where people had the opportunity to do that,” Gray said.

Pickett said the money for large-scale bathroom changes and improvements comes from the college’s budget, as both the center and Residential Life do not have the funds for the projects, which can cost hundreds and thousands of dollars.

Over the past 15 years, the college has made efforts to retrofit bathrooms to suit the needs of transgender and gender nonconforming students.

“In a perfect world, there would be lots of single-occupancy bathrooms with a locking door. However, there are lots of creative ways to retrofit bathrooms,” Maurer said.

Residential Life asks for money from the college’s budget through the Project Approval Request Process, which Pickett said can be slow. Currently, Pickett has a request in to renovate two to three bathrooms in West Tower to transform them into individual locking bathrooms. The proposal was sent September 2015, she said.

In 2009, residence halls upgraded to a swipe system for entering buildings. Before the change, all students had keys that allowed access into any of the residence halls. Many transgender students were able to access single-stall bathrooms in some residential buildings — a popular location being Eastman. The upgrade was a setback for transgender students, Maurer said. 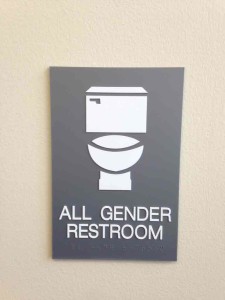 Pickett said for Spring 2016, “All-Gender Bathroom” signs will be placed on applicable bathrooms in residence halls.

Pickett said Residential Life cannot ask for the large amount of money needed to renovate bathrooms in the Quads, as the 2015 Campus Master Plan released this past fall indicates they will potentially be rebuilt.

However, Gerald Hector, vice president of finance and administration, said in an interview in the fall semester students should not expect to see physical changes on campus anytime soon. He said the Master Plan is a framework for where the college hopes to be in 10–20 years, and all the suggestions may not be fulfilled.

Some students believe that the college should take more initiative to assist students already on campus.

“I think there should be more gender-neutral bathrooms so that everybody has a chance to feel comfortable,” said an anonymous transgender student. “Everyone needs to use the bathroom, so having a space where everyone can feel comfortable is what this campus needs.”