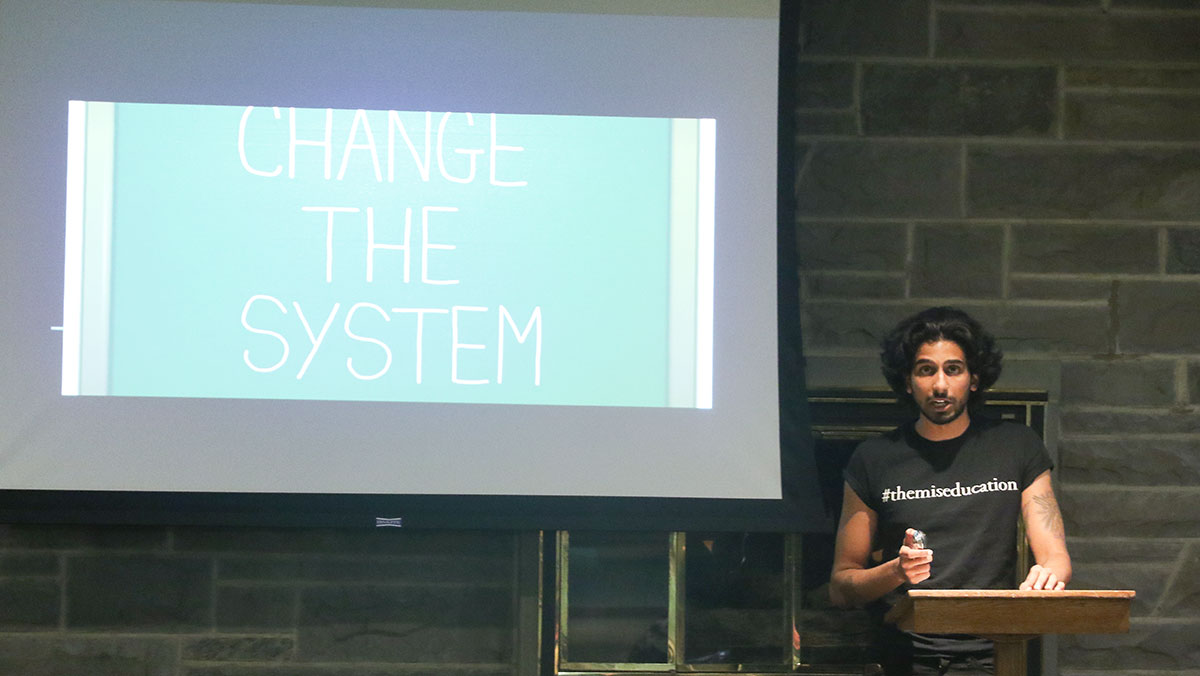 After attending Yale University’s 21st annual Black Solidarity Conference in February, four Ithaca College students have shared what they learned about the black community and the history of racism.

The Office of Student Engagement and Multicultural Affairs sponsored a trip for four students — juniors Brandon Paul and Arlana Shikongo and sophomores Anissa Ash and Efosa Erhunmwunse — to attend the conference in February, which focused on aspects of the African Diaspora. The conference’s theme, (Mis)Education, highlighted inaccuracies in today’s black history education.

They shared their experiences with 16 students March 31 in Klingenstein Lounge. Each student presented topics on the systematic and internal struggles people of color experience.

Paul presented statistics on today’s incarceration rates and emphasized the fact that “it is most often about race.” He explained by talking about the historical strategies put in place by authorities to specifically target people of color.

Ash spoke about the future of black culture and the importance of self-dignity. She talked about the discussions held at the conference, encouraging people of color to find pride in their culture and not be afraid to enjoy it.

Following the presentation, they held a question–and–answer session, during which they explained their personal feelings about the conference.

Shikongo said the idea for this presentation came from RahK Lash, assistant director of multicultural affairs. She said he suggested they teach the college community what they learned at the conference.

For most of her life, Shikongo said, she has attended predominantly white institutions, so the conference was a new experience, which she wanted to share with other students. With the presentation, Shikongo said, she and her group want to start a conversation and spark an active change. She said they wanted the presentation to have the same focuses as the conference.

“We really just want to highlight that there has been a very huge misrepresentation of the African-American community in the United States,” she said. “That’s kind of the focus of our presentation. For us, we just really want to show that these narratives exist, sure, but there are steps that can be taken to change that and start telling a different story because that’s in our hands.”

Senior Alex Blanca said he appreciated the fact that they were able to bring back what they learned from the conference and share it with students at the college. He said they are getting the conversation started and connecting people who have the same goal in mind.

“It lets you know that people across the country are fighting the same battle, but in different ways,” Blanca said. “All these topics that were covered in the presentation are very relevant, and not many people know about it. It’s just very empowering.”

Senior Merry Ryer said she was shocked to learn about pressures associated with choosing between predominantly white institutions and historically black colleges or universities. She said she is grateful that the four students were able to share this information with her.

“Obviously, the miseducation is something that white society has developed our whole entire lives, so doing things like this to combat that and bring the narrative back to more equality is obviously super important,” she said.

Sophomore Mieshon Walker said she was intrigued by the mass incarceration portion of the presentation because she’s working on a case study about the topic for the Martin Luther King Scholar program. She said the fact that these students brought back the information they learned and shared it with students at the college will help strengthen the community.

“This is a college that really needs healing, and we need to help people of color and people of other marginalized identities affirm themselves,” Walker said.