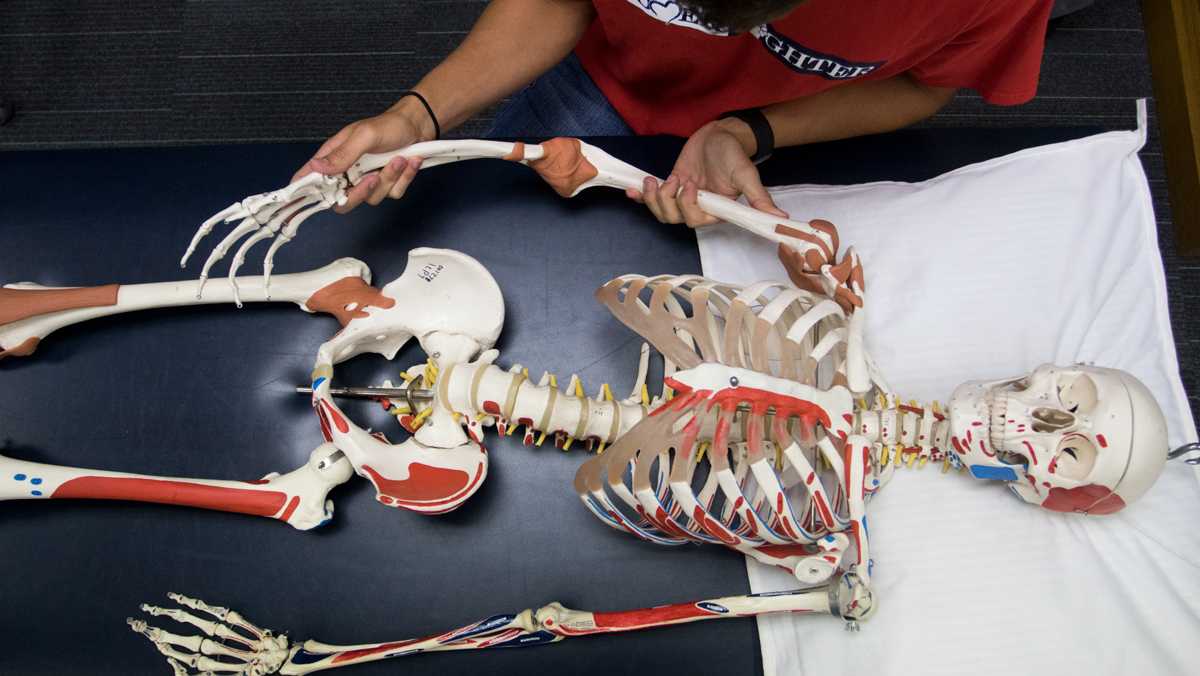 Senior Riley FitzSimons walked into the summer anatomy lab program nervous at the idea of dissecting a human body, but by the end of the 10–week program, FitzSimons mourned the ending of the life-changing experience.

“You get to see parts of people that you would never ever see, and [the donor] would not even know things that I know about him,” FitzSimons said. “It’s a very intimate process, in my opinion. … No textbook, no online course could ever replace that.”

While most Ithaca College students leave campus for summer break, a group of 85 rising seniors in the physical therapy program stayed to participate in a 10–week summer anatomy lab.

The course includes a head-to-toe dissection of a human donor, mostly focusing on the muscular and skeletal system, said Jim Yaggie, professor and director of the Department of Health Sciences and Human Performance. Students work together in small groups to dissect one human donor. Every Monday, Wednesday and Friday, the students attended four hours of lectures followed by four hours of lab work, Yaggie said.

Anatomical dissection is the best tool to learn about the human body, Yaggie said, but other colleges are moving toward doing the course online, which is less immersive and hands-on. Other schools use online courses to avoid the expense of purchasing donors and having a lab that meets human biosafety standards, Yaggie said. Students at the college have to pay a lab fee of $250, which covers the cost of each donor, he said.

“The immersion our students get in the summertime is unparalleled,” Yaggie said.

“I felt off the first couple days of going into that lab,” FitzSimons said. “I would come home and sit and try to process what I was doing. … You have to keep in mind this is what [the donor] wanted, and I think that helped a lot.”

Senior Zachary Thomas said he was excited to be going into the program and getting hands-on experience. He said the course was a good transition into graduate school in terms of workload and professors’ expectations. The course was also a bonding experience for the students, he said.

“The biggest thing I took from it is that, and even Dr. Yaggie kept talking about it, is that he views it as a transitional summer,” Thomas said. “I really took that away from it, going from our undergrad and then going to this summer, where you transition as a class … into our upcoming grad years.”

He said the course solidified his goal of going to medical school to become an orthopedic surgeon.

“It was the first class where we felt we were able to connect to what we’re going to be doing in the future,” Thomas said.

At the end of the course, the students hold a memorial service for their donors. FitzSimons’ group painted a rock with their donor’s name and drawings of engineering tools, because their donor had been an engineer. They said it’s important to remember the donor is a person who has a family and lived a full life.

“I had fulfilled my duty to take care of our donor from the beginning to the end,” they said. “I don’t know him, but I know everything about him, and he’s my template going forward. I will think of the human body and refer back to what I learned in that course, so he changed my life.”

I do not watch Grey’s Anatomy. But I may just have to tune into next week’s episode, which is set to include a few songs performed by characters on the show. If you follow Grey’s, you are probably well aware that Sara Ramirez, Tony winner and diva extraordinaire, has an amazing voice.

Janet Green ’79 grew up wondering if there was something wrong with her. As a child born with an enlarged clitoris, Green said jumbled memories of being exposed in hospitals and paraded in front of doctors characterized the early years of her life. Before Green even left the hospital, she had already undergone her first…